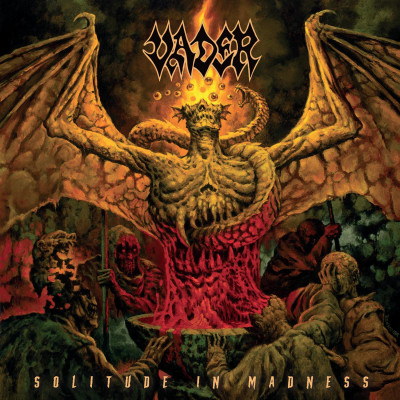 Solitude In Madness by Vader

Since the release of their 1992 The Ultimate Incantation debut, Polish death metal veterans Vader have rightly been one of the most well regarded bands in extreme metal. Despite a hefty turnover of band members over the years, the band have seemed to regroup and record album after album of high grade extreme metal, with no thought for gimmicks or passing fads, and consistently produce the goods. Now, on studio album number twelve, and approaching their thirtieth anniversary, can they still offer something fresh to the scene with?

Happily, the answer is yes. Starting off with the full force of ‘Shock and Awe’ the album sets out its stall with one simple mission statement, to destroy everything in its path. A promise it follows up with ‘Into Oblivion’, with the rapid fire drumming of James Stewart dominating and driving the track along as he does with ridiculous power throughout the record. It’s one on those records that takes a few listens to fully appreciate the technical skills on display as it takes that long to get over the overwhelming intensity on each of the tracks.

Most bands find time for a short respite from such an intense experience with a short instrumental or a slower track. No such luck here, as for a break from the 3 to 4 minute crushing death metal numbers on show, you instead you get two shorter, faster tracks in ’Despair’ and ‘Stigma of Divinity’, which take the already frenetic pace and ramp it up a few more levels. The production ensure that each track that comes along is a fresh punch to the face and the resulting eleven tracks will leave you a bloodied mess in the corner.

It took them nine years from forming to creating that impressive debut and that definitely served them well as they had a chance to learn their trade and pay their dues as a live band before starting off, and that really shows. The band have survived many line up changes throughout the years with only frontman Piotr Wiwczarek surviving from the original line up, and they haven’t suffered for that, in fact they seem to have become a stronger band over time. Solitude In Madness is a testament to their dedication. Eleven tracks, 30 minutes. No need for intros, filler tracks or slow, ponderous breaks, just a constant barrage of intense noise. Lovely stuff!