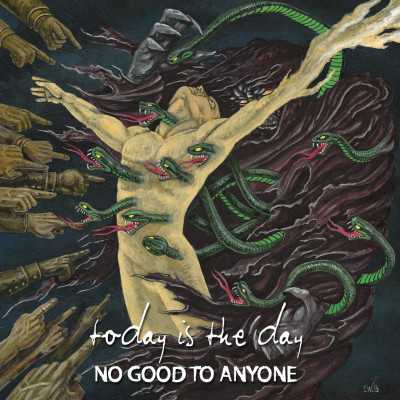 No Good To Anyone by Today Is The Day

The return of Today Is The Day has been long awaited and No Good To Anyone, their first album for six years, shows that the band’s penchant for intense music is still there in spades. Steve Austin’s band have never been one to shirk away from describing the harsh realities of life, done with a cathartic approach, and this album keeps that tradition thriving.

The album kicks off the lurching seven minute plus menace of the albums title track which morphs into full on heaviness throughout the track and its great to hear the full gamut of the bands sonic assault. From then on in, No Good To Anyone features the low slung wailing of ‘Attacked By An Angel’, the hypnotic ‘Son Of Man’ and the grooving ‘Burn In Hell’ and that’s just for starters.

The short but sweet psychedelic twinged ‘You’re All Gonna Die’ sounds urgent instantly and is a definite album highlight sounding like a bad trip put to music while the piano led interlude that is ‘Orland’ acts as a chance for you to catch your breath before the creepy noise of ‘Cocobolo’ sneaks up on you with its menacing lyrics and assured delivery. There is another interlude in ‘Agate’ before the soothing ‘Callie’ comes into play and this track define toy acts as the albums centrepiece and is a mellow but haunting refrain that sounds very Tom Waits like, but fits in perfectly to the album. The industrial tinged ‘OJ Kush’ follows and along with the discordant ‘Mercy’, give the album a taste of the early Today Is The Day vibe. The album concludes with three tracks that show Austin’s distinctive voice in full power with the hazy ‘Born In Blood’, the epic ‘Mexico’, and the albums dreamlike conclusion ‘Rockets And Dreams’ finishing things off in true Today Is The Day fashion and is the perfect way for things to commence.

The tracks on this album are very varied when it comes to their sound and approach, but it all sounds very coherent and the whole album sounds like a mixture of dreams and nightmares.

Today Is The Days melding of noise rock, grindcore, metal and beyond to create an unholy noise still sounds as vital as it did when the band first emerged and with No Good To Anyone, Today Is The Day have made an album that agitates and soothes in equal measure while still sounding like the world collapsing in on itself and for that they should be roundly praised.