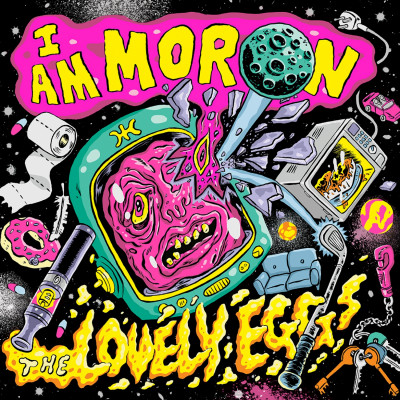 I Am Moron by The Lovely Eggs

Just when we need them The Lovely Eggs are back with another weird selection pack they picked up at the market. They’ve been shopping around and they don’t seem all that impressed with what was on offer. I Am Moron is a mix of the usual short, sharp, punky blasts and some looser more experimental numbers. Picking up where This Is Eggland left off they’ve kept up the momentum, pushing further on, tweaking older elements of their sound and bringing in new approaches with excellent results. Who is the moron? Is it the Eggs? Is it all of us, the docile public? If the album title and the full speed rage of first single ‘This Decision’ suggested we were in for a Brexit fuelled spleen venting, the songs here find a far wider and weirder set of targets for scorn. Even the blunt and livid scream of ‘This Decision’ leaves itself open to possibilities.

Stretching out past five minutes, the defiant opener ‘Long Stem Carnations’ is fairly epic by Eggs’ standards. Its surges on a three note synth stab for a hook and ends on a drawn out coda of spacey electronic warble that is itself longer than several of the album’s other tracks. Over the years they’ve developed a fiercely DIY, ‘do as we please’ aesthetic and here they double down on that while also acknowledging the development of their relationship with co-producer Dave Fridmann, who has helped them expand their sound into this richer more colourful world. I Am Moron is full of subtle touches and layered detail you only catch on headphones or after multiple listens. Oh yeah, I’ve listened to it a lot, it’s great.

The vivid Casey Raymond cover shows an unfortunate pink head adrift in space among a cloud of general flotsam – doughnuts, microwaves, keys, and the now desirable toilet roll, spilling into the void. This curious blend of cosmic and commonplace is explored throughout the album. It’s that teeth clenched tension between big picture human needs and the relentless tide of plastic crap fired at us every waking moment. You want security and a sense of purpose sure, who doesn’t? But have you tried frozen meals for one and daytime TV game-shows? The foundational myth of choice and the industrial manufacture of desire. The Lovely Eggs burn through a fistful of hallucinatory shopping lists shouting that the Emperor has no clothes. It’s an old song but it could hardly be more timely.

Even your desire for self improvement can be sold back to you, ‘You Can Go Now’ offers a parade of readily available delights and the buried sales mantra “Like what you see, hate what you are…” The fabulous ‘I Wanna’ starts with video game twinkle and brings a disaffected stream of shallow desires never to be fulfilled. Its impulse is mirrored in ‘Insect Repellent’ a teeming, buzzing, swarm of disgust at petite bourgeois comforts. The escalating count of ’24 Eyes’ is punctuated by the chant “Are they for sale?” The pace hardly dips and the jaded view of things is relatable rather than hectoring. The album’s shortest track, the baffling, minute and a bit rant of ‘The Digital Hair’ is mostly impenetrable but gives us the line “the pigeons eat chicken from the streets that you’re sick in.” Which is a supreme summation of dying British town centres.

It’s not all foot to floor riffs and malcontent though. Two of the records best tracks push away furthest from that. ‘The Mothership’ is gorgeous, a woozy cloud of electronics that carry Holly’s voice softly singing an eternal parenting refrain. Wanting to sleep alone and wanting to be there for your kid, it captures the love and the ache of it in delicate lines. Its unlike anything they’ve done before. The closing tune ‘New Dawn’ is amazing. A steady flowing track threaded with backwards guitar that sounds as if its built from loops. The lyric is another list but this time of vivid eternal images like a string of Buddist koans. It again touches on parenting and just when you fear they might be getting too cosmic it ends weirdly, smearing dog shit off their shoes across the gleaming marble of a country kitchen as they leave. That’s the universe there kid. I Am Moron spits and fizzes with righteous frustration and is packed with invention. Over a decade in The Lovely Eggs are at the top of their game.