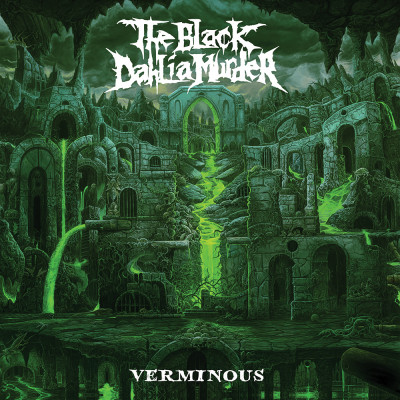 Verminous by The Black Dahlia Murder

From the peaceful lakeshores of Waterford in Michigan to bustling venues of rabid fans across the world, The Black Dahlia Murder have earned their rightful place within the prestigious pantheon of death metal’s most successful bands. Bracing through two decades worth of stylistic shifts and ephemeral fads in the metal scene, founding members Trevor Strnad and guitarist Brian Eschbach have kept their creative vision consistent and solid from the getgo, with each subsequent release further establishing the band’s distinct strain of technical and melodic death metal. With their musical identity now firmly established, the deathly quintet has set off to reach the extra mile beyond their familiar core sound with their ambitious and sludgy ninth-born Verminous.

With the opening title track and its follow-up ‘Godlesssly’, the band sets the mood in pure Dahlia tradition with its massive death metal opening credit sequence leading straight into a fast-paced whirlwind-like frenzy of frantic riffs and thrashy grooves. Trevor’s shrieking screams and guttural growls sound as beastly as ever, the riffs hit like hypertrophied Gothenburg metal melodies delivered at lightning speed and Alan Cassidy’s drums blast away at speeds only tolerated on the German Autobahn. It may be business as usual, but it doesn’t get any less effective.

With that being said, Verminous makes it crystal clear that the Dahlias know every last bit of their musical DNA. With the listener now warmed up and up to speed, the remainder of the album goes on to show that the band is also willing to play around with their own sound, dissecting, deconstructing, remodelling and mutating their sound with newfound ideas from neighbouring genres and musical forefathers. In some regards, Verminous feels like the Black Dahlia Murder openly indulging in their love for heavy metal culture by wearing their most treasured influences on their sleeve. After having proven his technical chops on Nightbringers, lead guitarist Brandon Ellis further expands the band’s sound with classic heavy metal leads that emphasize impact and melody over mindless shredding. Ellis gives space for his notes to breathe, to passionately sing and wail on tracks like ‘Child of Night’, ‘Sunless Empire’ and ‘Dawn of Rats’, adding not only a more dramatic edge to the songs but also a distinctly anthemic feel that expands as we progress through the tracklist.

Though Verminous does include some slower, sludgier riffs that give the album its extra miry atmosphere and rougher edges, the album only rarely settles in its pacing and keeps you on edge with its constant shifting of gears and left turns. ‘How Very Dead’  sticks out as one of the most surprising cuts off the album, evoking a striking blend of Swansong-era Carcass and grimy Countdown to Extinction-era Megadeth thrash that bleeds over into ‘The Wereworm’s Feast’,  an equally majestic salute to classics delivered with an unmistakably Black Dahlia twist. After an eerie acoustic interlude set in a slimy, wet sewer on ‘A Womb in Dark Chrysalis’, the album culminates with the band’s most anthemic track to date with ‘Dawn of Rats’.

Built on a solid understanding of what made the band’s sound so distinct and effective, Verminous is a thrill-ride and daring new chapter written by The Black Dahlia Murder’s unwavering and highly contagious love for all things that lurk in heavy metal’s catacombic depths. For those who lurk in the shadows, the delightfully deranged, those who revel and rejoice in all things sinister and strange: Michigan’s unhallowed have returned to quench your ghoulish desires once more. Listen to them, the children of the night. What music they make!