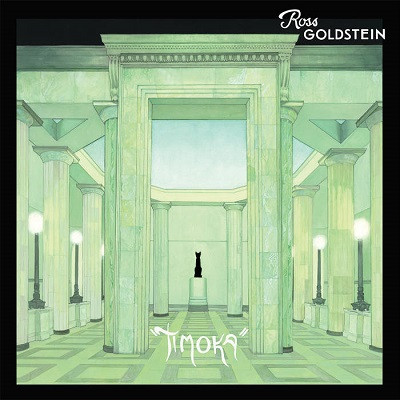 Whenever I think of some of the best music from the ambient and minimal sounds of the late ‘60s and into the early ‘70s, I would think of bands and artists like; Popol Vuh, Ash Ra Tempel, Klaus Schulze, Terry Riley, and Tangerine Dream. One of those artists that are going to be up there with those five is Ross Goldstein. Ross originated from the psychedelic period with the 2017 release of his second album Inverted Jenny. The album crossed over the pop sounds between The Beach Boys, Electric Light Orchestra, and Marc Bolan of T. Rex.

The album was released after his 2007 debut, Trial Songs. Ross then wanted to do something that was beyond the psych and orchestral pop sounds that he grew up on. He wanted to open the doors of the surreal, minimal, and the Krautrock voyages with this 2018 release, The Eighth House. What he did was to make a movie inside the listener’s head by using both the Chamberlin and the legendary Mellotron that was a part of the golden-era from the Progressive Rock movement.

Now in 2020, Goldstein has returned to sit on the throne once more by adding a darker and menacing atmosphere with the release of his new album, Timoka. Released on the Birdwatcher Records label, Ross is honoring the late great Florian Fricke on here by making the candles burn brighter than ever. Listening to his new album is like walking through this gigantic rainbow maze in Alejandro Jodorowsky’s 1973 cult classic, The Holy Mountain. And what Goldstein has done is to make that film as an alternate soundtrack brought to life as you’ve never heard it before.

Whether it’s the eerie walking down the steps of the Andes mountains by channeling the opening sequences of Werner Herzog’s Aguirre: The Wrath of God from the two-part movements of ‘Obsidian Cat’ or the dystopian landscapes of our solar systems with ‘Lunar Day’, Ross goes a step further by taking his listeners to each of the infinite doors that will open in those parallel universes.

‘Pink Broom’ sounds like it was recorded during the sessions of Tangerine Dream’s Zeit from their Pink years on the Ohr label before a mouse squeak at the end as ‘Bas Relief’ channels the late great music from György Ligeti’s compositions on Stanley Kubrick’s 2001: A Space Odyssey. ‘Pytx’ is a mournful composition that can fill the halls of the Notre-Dame de Reims in France while ‘Double Solitaire’ delves into the mystery of the Kabuki theatre.

It took me about seven listens on Ross’ Timoka. It is a dark, disturbing, and wonderfully done release that I’ve listened to this year. I have to say Ross’ music nearly gave me goosebumps at times because I can never expect what he was going to do next. So if you are prepared to go on a journey beyond the infinite worlds of our solar system to see what the monolith has in store for us, then Timoka is the adventure that you’ll be a part of, forever and ever.