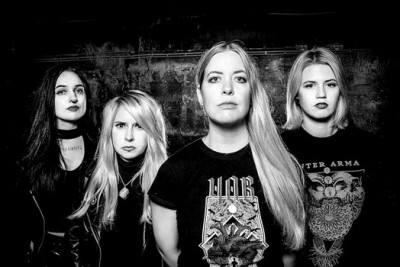 Our album isn’t a concept album, but if you were to put a theme on it, or around the lyrics of the songs it would basically be losing control over your life.

Konvent play a majestic style of death and doom metal and have breathed new life into the genre. Their recently released debut album Puritan Masochism is a must listen for fans of the likes of Candlemass and early Paradise Lost and is a heady mix of death and doom from start to finish. Gavin Brown recently caught up with Konvent vocalist Rikke Emilie List to talk all about Puritan Masochism as well as how their recent debut European tour went, last year’s tour with Monolord, how the band started and the heavy music scene in their Copenhagen hometown.

E&D: Your debut album Puritan Masochism was released recently. How did the creation and recording of the album go?

Rikke: We had a lot of concerts in 2018 so the last leg of our songwriting was a bit stressful, but we took it as a challenge and ‘Ropes Pt. II’ was actually finished the day before we hit the studio. We had a lot of long days in the studio but we got very inspired to write new songs and learned a bunch.

E&D: What are some of the subjects you tackle on the album?

Rikke: Manipulation, sorrow, fear are some of the subjects we focus on.

E&D: What is the significance behind the title of the album?

Rikke: Our album isn’t a concept album, but if you were to put a theme on it, or around the lyrics of the songs it would basically be losing control over your life. The song ‘Puritan Masochism’ (which is also the title of the album) is about how everyone has a tendency to do things, or thinking things that actually hurt us, but we keep thinking/doing those things because we feel we have to – in order to fit into something or to live up to some imagined expectations. And sometimes we keep doing these things without even realising it because you just go on autopilot. It’s sort of our way to say that we don’t have to live like that, but we would really like people to listen to the album and get their own feelings listening to the music and their own meaning of the songs. Hopefully it’s music where there’s nothing forced on the listener. We don’t like to go into too much detail with the lyrics, because we value the listener being able to create their own stories and images in their heads.

E&D: Where is the sample at the start of the track ‘Trust’ taken from?

Rikke: It’s from the movie An Angel at my Table by Jane Campion from 1990.

E&D: The riff that starts ‘Trust’ off is immense. Do you have a favourite riff from the album or a favourite song?

Rikke: They’re all our babies, ha ha, but I think we would all say ‘Ropes Pt. II’ or ‘Puritan Masochism’.

E&D: What are your favourite riffs of all time?

Rikke: That’s impossible to answer. There are so many!

E&D: Did you always intend to end the albums with the double header of ‘Ropes Pt. I’ and ‘Pt. II’?

Rikke: Nope, it was something that only made sense when we had finished ‘Ropes Pt. II’ and were in the studio.

E&D: Did you consider morphing both parts into one longer song or did you feel they work better as two songs?

Rikke: They had to be separate because they deal with two different aspects.

E&D: You have just done a video for the song ‘Ropes Pt. II’. Can you tell us about the video and its themes?

Rikke: We had a meeting with the director Nicky de Silva and told him about the song and how it’s about going through a hard time and not being able to receive help. The video is his visualisation of that and we couldn’t be happier with the result!

E&D: What has the reaction to the music of Konvent been like so far?

Rikke: Very positive! Of course, some people have called it too monotonous, but that’s sort of the name of the game, when you play doom inspired music.

E&D: You have just been on tour in Europe. How did the tour go and what have some of the highlights been?

Rikke: We just came home and we have had the best time! We can look back on a tour with three sold out shows, which we had never dared dream of, and we played three new countries (Sweden, Norway and the UK). The highlight has definitely been seeing people’s reactions and talking to everybody who came out.

E&D: You played your first UK show in London on the tour at the end of February. How did that go?

Rikke: We were so excited to play London and it went really well. The staff at The Dev in Camden were so nice, the sound was on point and the venue was completely jam-packed.

E&D: How was the experience of touring with Monolord last year?

Rikke: It was great to come out and test ourselves. At that point, we had never been away for more than a few days in a row and this was a week. Of course, it’s nothing compared to bigger bands but it was a pretty big deal for us at that time. On top of that, Monolord had always been a band we had dreamed of touring with since we started, so it was definitely a milestone for us.

E&D: You played two big festivals in Roskilde and Copenhell last summer. How did those shows go?

Rikke: Copenhell was very overwhelming. There was around 4,000 people, which today still is the biggest crowd we have ever played in front of. Roskilde was huge as well because it is the biggest festival in northern Europe. But it was also a bit daunting because we knew that it wasn’t going to be an all metal crowd. But it seemed like people were digging it.

E&D: What is your favourite Konvent song to play live?

Rikke: We all have a love for ‘Puritan Masochism’, ‘Ropes Pt. II’ and ‘Squares’.

E&D: What has been the best gig that Konvent have ever played?

Rikke: It’s a hard question but there is no doubt that Copenhell meant something very special to us all.

E&D: What has been the best gig you have ever witnessed?

Rikke: Personally, it was Rammstein in Copenhagen in 2004. I was a huge fan and it was my first time seeing them live.

E&D: How did Konvent start as a band in the first place?

Rikke: When our first drummer Mette started taking drumming lessons in 2015, her teacher (Nicolai from the band Dirt Forge) told his roommate that he had started teaching a girl. His roommate was our bass player Heidi and she instantly contacted Mette, asking her if she wanted to start a band. It had been a dream of Heidi’s to start a band for a long time but all the musicians she asked didn’t have time in their schedules to start a new project. Given that both Mette and Heidi were more or less on the same level on their instruments, a band also seemed like an ideal opportunity to practise as well as write music. They looked for a guitar player and asked Mette’s study buddy Alexander (also from Dirt Forge) if he would suggest the idea to his girlfriend Sara, who Mette knew had previously played in a band. They also needed a vocalist and asked Mette’s sister Rikke, who had been taking extreme metal vocal lessons with a metal vocalist for about six months at that time. She was game and we all met up at a rented rehearsal space for an afternoon and tried jamming to The White Stripes’ ‘7 Nation Army’. The vibe was good and we decided to form the band and get our own rehearsal space. After three years, Mette had to quit the band due to her studies and we were very lucky to find Julie. Julie was only 18 at the time but had played the drums for six years and blew us away with her talent when she auditioned, and it was a no-brainer. Our final formation was established. The fact that we’re all females is completely random. We just wanted to start a band and the people who wanted to join happened to be women.

E&D: Did you always want to combine doom and death metal with the music of Konvent?

Rikke: We never sat down and talked about which genre we wanted to play. We just wanted to play heavy music and this is the result.

E&D: What are your favourite death/doom albums of all time?

Rikke: There are so many great ones. We all listen to a lot of different genres and it would be a shame to narrow it down.

E&D: Who are the band’s biggest musical influences?

Rikke: We all listen to a lot of different music and we don’t really have a band that we are trying to sound like.

E&D: What was the heavy music scene like in Copenhagen when you first started and what is it like today?

Rikke: There are so many amazing bands in Denmark! International bookers should definitely steer their eyes to the North. For our two first shows of the tour, we had the Danish bands Eyes, Morild and Katla with us. Everyone should check them out!

E&D: What has been the most memorable experiences of your time with Konvent so far?

Rikke: Probably getting our record and booking deal with Napalm Records, getting booked for Copenhell and releasing our debut record.