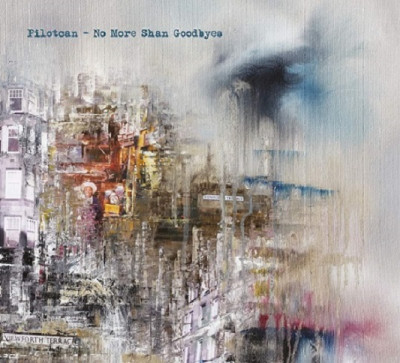 No More Shan Goodbyes by Pilotcan

One of my top albums of last year was the triumphant return of Edinburgh’s Pilotcan. For their first album in 14 years, the sublime Bats Fly Out From Under The Bridge was a glorious fusion of post rock, shoegaze and folk. For the follow-up album, the exquisitely titled No More Shan Goodbyes, the band enlisted Idlewild producer Rod Jones and former band member Joe Herbert (guitar) returned to the fold. The resultant record has turned out a more direct body of work with songs that eschew some of the more experimental components of Bats… in favour of indie folk rock. It seems a perfectly natural fit to be working with Rod Jones and the results are favourable. There are still elements of expansive soundscapes and the guitars still wander occasionally into post rock realms, but the overall feel of the album is to allow the melodies to drive the songs and their structures.

Vocalist/guitarist/songwriter Keiron Mellotte cites influences such as Echo and the Bunnymen, Jesus and Mary Chain and Lemonheads and there are certainly sounds on the album in the vein of those bands. To these ears though, I’m hearing a lot of The Afghan Whigs, mostly due to the guitar tones and the superb piano work, that isn’t technical, but is just full of feeling. Another standout feature of the album, requiring special mention, is the stunning backing vocals from Keiron’s sister Tanya (ex Tunic/Go Commando and collaborator with David Holmes), her voice adds an undeniable quality.

The album begins with ‘McKinney Is Dry’, gorgeous melancholic piano, cello and acoustic guitars play out a tender backdrop for Keiron to lament over old times. A sampled phone call and backtracked guitars transform this delicate little opener into magical realms. Some song writers have a unique way with the simplest melodies and the chorus of ‘With Tongues’ hits the spot with me. Nothing new going on here in terms of creating anything that we haven’t really heard before from a multitude of guitar bands. The voices lift this song up onto a higher shelf and transport me back to a halcyon time of indie discos and a world where you could go to the shops, without fear of contracting something that could kill you in a week. The guitars rage with a fury pushing close to that created by certain other Scottish noiseniks, Mogwai.

‘Romanticise the City’ takes a simple set of chords, adds a pleasing melody and some lovely backing vocals and it all goes together to form a perfunctory, upbeat song. The pianos and guitars at the end echoing prime Afghan Whigs. I have a minor issue with ‘(The) EZ Reach’ in that it sounds too much like the preceding track, using the same blueprint of basic chords and a lazy melody, but not quite managing to differentiate enough, meaning my attention wants to drift. Thankfully on ‘Lonely Jalapeno’, the guitars fizz with an undertow like a swarm of bees and twang with a warm country rock tone. Some sassy brass in the chorus intervene to say hello and Keiron sings like a man whose heart has taken a bit of a battering. Without a doubt, this is another song that Greg Dulli would be proud to call his own. The band sure know how to rise up when the time is right to add levels of noise and emotion that brings a most pleasing dynamic to this record.

I was always in awe of some of my fellow countrymen who took the bold step of singing in either their own local accent (Northern Irish) or added lyrical content that only made sense to people from that region. Keiron Mellotte does this with particular aplomb, and ‘C.H.U.D Song’ rips along noisily with a know-how and brash confidence. Not sure what Keiron’s fixation is with bracketing the word ‘the’ in song titles (the last record had them too) but ‘(The) King Is Dead’ is a beauty of a song laying on the country love with some sweet slide guitars, woozy brass and gorgeous backing vocals. ‘Fire from the Mountain’ is a raucous shitkicker with raging guitars that drive hard when called upon. Not the strongest of songs in terms of melody but I daresay this one will be a blast to play live.

Mainlining from the Dulli bloodstream of twisted off kilter pianos and acerbic guitars, ‘Weeds’ shimmers with a hallucinatory haze. ‘Cuts of the Summertime’ is a sombre indie ballad with fulsome organ and breathy vocals. On ‘Cause Won’t Bend’, gorgeous floaty guitars bring an intriguing post rock element and when the dirty fuzz erupts it’s a sound I wish there was more of. Album closer ‘A Farewell to Rockets’ is a weighty melancholic ballad spanning 9 minutes. Featuring some elegiac guitars and gentle perfectly placed piano, the track flows like tiny streams joining a wider river before crashing spectacularly into an ocean of swelling guitars.

As I mentioned at the outset, Pilotcan’s last record really touched me with the sounds and songs therein. I was keen to hear this new album and my expectations were high. The band set out to record something different and that initial listen took me a little by surprise. Relying less on guitar effects and the urge to post rock, the songs on No More Shan Goodbyes need to use straight-up song writing ability to get you on their side. Keiron has the know-how with words and melody and it was a master stroke to get Rod Jones to produce. The record sounds wonderfully Scottish and that’s the major appeal for me. I think that the combination of the aforementioned factors makes this record an enjoyable listen and it is a great companion to (the slightly superior) Bats Fly Out From Under The Bridge. At least we didn’t have to wait so bloody long this time round for some new music from Pilotcan. Still one of Scotland’s best kept secrets, maybe by the next album I get to declare something different the end of my review!