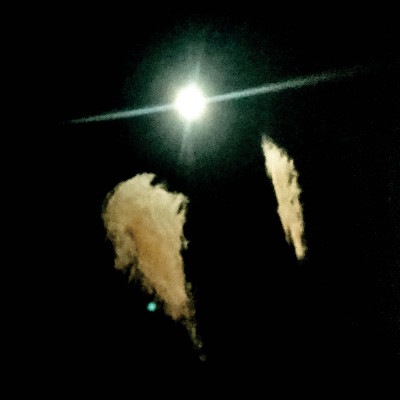 “Nature will give you clues if you are brave”

In 2017 the artist formerly known as Madeline Johnston/Sister Grotto re-emerged with a new moniker – Midwife – and blew my flimsy little mind. Like Author, Like Daughter somehow managed to lock into a deep part of my psyche and then proceeded to lovingly unspool it over 51 delicately crafted minutes of reverb-doused guitars, hauntingly distant drums, and an enveloping sense of mysterious familiarity. This album is evidently impossible to tire of: even now, 3 years later, it is on pretty regular rotation (with her 2018 EP Prayer Hands also making periodic appearances). So, it’s fair to say, that Forever arrived atop a precariously imbalanced stack of expectation.

Johnston, initially, seems to have set aside the pensive hope that frequently reared its head up above the lamenting guitar swirls on Forever‘s predecessors. The album opener, ‘2018’, begins with the line “This is really happening”. An utterance that, whilst written for entirely different reasons, has taken on a stirring and poignant significance during these particularly uncertain times. It’s steeped in the regret of hindsight, the disappointment in initial disbelief, and a pleading wish to undo everything. These are words that echo off of the walls of dark caves within us, startling those deep-seated fears into fizzy action. They disturb our clutched notion that suffering only happens at a distance. Instead, this presses itself up close, flaunting borders, barriers and a piddly 2 metre gap between bodies.

The palpably sombre tone that drives that opening track is wrought about by the circumstances surrounding the album’s creation. Previous LP, Like Author, Like Daughter, was formed from the wreckage, disharmony, and displacement caused by the closing down of DIY space and Denver institution, Rhinoceropolis, of which Johnston was a resident. In a similar but incomparable manner, Forever has been crafted following the unexpected death of her close friend, artistic confidant, and former roommate, Colin Ward. Speaking of this tragedy in relation to her new record, Johnston said that “I wanted to write him a letter. I wanted to make something for him in his memory”. If Forever is to be considered that letter, then this is a precious correspondence to keep close and treasure.

Ward does actually appear on the album. On the penultimate track, ‘C.R.F.W’ we hear him reading a poem that ruminates on the blurred lines between nature, technology, humanity, and, fittingly, the transience of existence. His words espousing the importance of letting go whilst the accompanying melancholy guitar perambulations seem to weigh up this notion, unwilling to simply accept it but eager to welcome relief. The freedom and lightness of shoulders unburdened. But, of course, the burden never was that. It was a load that would be happily & proudly carried forever. Never an incumbrance, always a pleasure. Yet, still, this guides us to open our hands, to let it slip. And with it guilt, shame, grief. Let go of the leaf. Its purpose is not lost.

The whole record feels like it’s moving through various stages of grief. The opening track, with its sharpened edges and the snarled line “Get the fuck away from me” can be read as denial shifting into anger. We also experience the depths of patient, aching, pain on the instrumental, ‘Vow’ with its steadily breathing notes focusing in tight on the minutiae, seeking solace and a way to accept and get through this.

The journey back and forth through these phases is perhaps most starkly apparent on the forlornly uplifting ‘Anyone Can Play Guitar’. Johnston’s voice takes turns to either leap in awe or sink in despondency whilst delivering the line “Anyone can fall in love”. We hear the trembling duality of her need to reach for hope whilst experiencing a sadness so deep that it exists within the very marrow of her bones, encapsulating the term “bittersweet”.

Similarly, ‘Language’, with its refrain of “How do I say this in every language… I will never forget you”, reveals something wrestling beneath the surface. A strangled signal softly squeals from under fingered strings. A bass thud maintains the slow beat of a numbed heart that dutifully soldiers on for every pore, every heaved chest, and every blinked back tear. All of this weighs heavily upon the sound of this record. Imbuing each textured note with the sense of overwhelming loss.

But then we have the finale of the record with its rolling waves of distortion riding out from warmed tubes of amplifiers. ‘S.W.I.M’ feels like striding determinedly forward. Full of purpose and intent all the while counterpointed by the repeated phrase “I don’t want to live forever”. Whilst this may seem macabre or pessimistic, it’s actually a sturdy grasp of reason. It is threaded with optimism. Turn your face to death and stare it down. No need to cower or run. Hope for better, fight forever. This final moment seems like redemption. The Hollywood ending. Riding off into the sunset like Renton in Trainspotting, or The Killer’s Agent astride a motorbike zooming through a tunnel in Fallen Angels. Or, perhaps, in Paris, Texas, like Harry Dean Stanton watching his estranged wife and son from afar, knowing that they are in a better place without him. Or maybe even the character of Bill transcending life & death in the finale of Don Hertzfeldt’s liminal It’s Such A Beautiful Day. In each of these instances, the protagonists suffer loss to find hope. Shed the tired skin but keep your memories and your scars as they will help to guide you. Drop leaves so that you might grow.