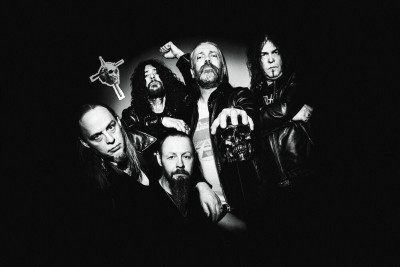 I can answer that in three words: EPICUS DOOMICUS METALLICUS!

Candlemass are rightly spoken of in legendary terms by bands and fans alike as pillars of doom metal. Gavin Brown caught up with the band’s bassist and founder member Leif Edling to talk about the band’s latest EP The Pendulum as well as their last full-length album, 2109’s The Door To Doom, having Tony Iommi bursting on a song, Black Sabbath and things doom!

E&D: Your new EP The Pendulum has just been released and features exclusive demos. Are they newly recorded songs and can you tell us about them?

Leif: It’s comprised of never before heard, unused tracks cut from the The Door To Doom recording. The six track EP leads the listener through a maze of frenzied riffing. The fully-mastered EP opener/title track ‘The Pendulum’ charges in with a melodic, head-swinging, thrashy rush.

E&D: The demo versions of the songs sound as immense as album tracks, how did the recording process of the tracks go?

Leif: I’m glad you say this, I hope people like those songs, even though they are demos and sound like it. Not bad in any way…they are “just” demos. And to be honest, I’m extremely happy that people on the internet seem to enjoy them very much. The songs are good! Recorded in just one day and not that more done to them. Rough and raw!

E&D: The Pendulum also features the title track of the EP. Is this a good indication of what the next Candlemass album will sound like?

Leif: I have no idea. The ‘Pendulum track’ was written for the The Door To Doom album so it pretty much represents what we did/do musically back then and also right now since it was recently released. What will come next I have no idea, I guess we will be touring and playing like crazy in the autumn and next year. So after that perhaps. New album 2022 or 2023? I’m sure we’ll do at least one more anyways, and it’s impossible to say what we’ll do in the future. I’m sure it will be heavy, doomy and metal though!

E&D: Are you working on new material while the world is in lockdown?

Leif: Nope, I’m mostly at home now with the family in our apartment so I can’t write much music at the moment. Need total solitude to do this, but we’re actually looking for a house so I can have a proper working space/studio. When the corona thing is over that will be on the top of the list so I can be more creative during the next pandemic.

E&D: What has the reaction to The Pendulum been like so far?

Leif: Very good indeed!. Don’t see many negative comments about it. And why should it be? It’s a really good song that rocks like fuck and being ultra heavy at times. Great solo from Lars and a super chorus.

E&D: You released your last album The Door To Doom last year. How has the album been reviewed by fans?

Leif: The reception from both press and fans has been really fantastic! We actually had one of the best years ever for Candlemass. Loads of gigs, lots of enthusiastic fans, super reviews, US Grammy nomination, Swedish Grammy. I can’t complain. Last year was fucking phenomenal!

E&D: On The Door To Doom, Did you always want to strike the balance between more mournful and sombre tracks like ‘Under The Ocean’ and heavier tracks like ‘Death’s Wheel’?

Leif: I always write “organic”. One really heavy song, then maybe an uptempo one. One with more attack. I don’t want the songs to sound the same. That’s boring. This time we even had a ballad on the album. First time. But ‘Bridge of the Blind’ is great! Lovely song. And Johan sings it in a magnificent way.

E&D: You worked with the master, Tony Iommi,  on the song ‘Astorolus: The Great Octopus’. How was that experience and how did the collaboration happen?

Leif: I came up with the idea during the recording of The Door To Doom. Of course the other guys thought I was insane, but our manager asked Tony Iommi’s manager and after a while we had an email back with a YES! I couldn’t believe it! I Was over the moon! After another couple of weeks we had the solo emailed to us and the rest is history!

E&D: How much of an influence have Black Sabbath been on you as a musician and how did you discover them in the first place?

Leif: A lot of course, but I have also been very influenced by NWOBHM and NWOAHM so I’m not totally Sabbath blind haha! I got Paranoid from my mother back in ’71 or ’72 and I still think it is the best music ever created.

E&D: What is your favourite Black Sabbath album and why?

Leif: I think they peaked with Sabbath Bloody Sabbath. Not a second on it that is even half bad. Pure magic from start to end. Top that with the best cover of all time!

E&D: Who else would you love to guest on a Candlemass song in the future?

Leif: Well…Tony Iommi recently played on ’Astrolus’, so I already had god playing on a song of mine!

E&D: Are there any plans for any rescheduled live shows at all at the moment?

Leif: Yeah, those we had to “cancel” are moved to a later date so the autumn seem to be very busy now. Actually, more and more gigs are getting booked for 2021 now. I think the world will prepare for BUSINESS again after the corona shit is over.

E&D: What is your favourite Candlemass song to play live and why?

Leif: Most of the Candlemass songs are quite fun to play. But some that I particularly enjoy in a live situation are ‘Dark Reflections‘ because of the flow of it, ‘Under the Oak’ and its heaviness and epic feeling. I also have to mention that ’Astrolus’ is insanely cool to play live due to the sheer brutal power of it!

E&D: What has been the most memorable show that you have ever played with Candlemass?

Leif: We’ve done a few, but one of them is definitely when we played a cover of ’Enter Sandman’ at Nobel Prize awards in Stockholm last year. The Ghost Pope himself on vocals and the entire royal family in front of us hahahahaha!! Sublime!

E&D: How did you get into heavy and doom music in the first place?

E&D: As such a revered doom band, what are your favourite doom bands and albums?

Leif: I can answer that in three words: EPICUS DOOMICUS METALLICUS

E&D: What was the first album that you ever bought it heard and what effect did it have on you?

Leif: Got Paranoid from my parents when I was 8 or 9 years old. Had a massive effect on me of course. Soo many great albums came out in those days. Started to buy my own records around ’73-’74. Sparks, BTO, Heep, Sabbath, Deep Purple.

Leif: Impossible to say. Got zillions of influences. Every album I listen to I get some sort of inspiration from. Doesn’t matter if it is Crosby Stills & Nash or Slayer.

E&D: How does it feel for Candlemass to be cited as a massive influence by so many bands?

Leif: It’s fantastic! Quite an honour!

E&D: What have been some of your favourite memories in your career with Candlemass so far?