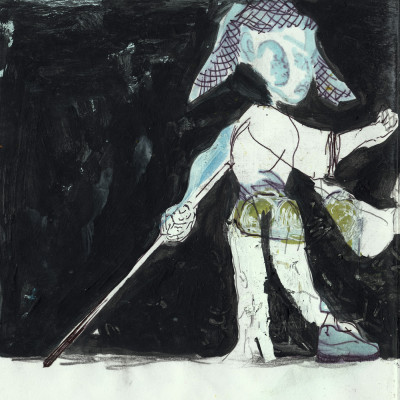 It starts at the end, with a wild rush. The first six minutes of ‘King Kong’ are like the roaring close of a live set, the band digging into the rhythm with abandon it tips over into a free form stand off. Quietly, almost unexpectedly, a riff starts up, re-establishing structure and rising tension. A mumbled, distorted vocal sinks beneath fried wah-wah guitar wailing and it swirls to a quite abrupt halt. It ends in the now, sunlight through curtains and a soft somnolent strum. A tumble of dream images and hazy stasis. “The ghost of a canary brushing his teeth.” Irma Vep‘s fourth album Embarrassed Landscape is a beguiling mystery, a rich tumble of lyrical opacity and musical spontaneity.

Irma Vep is the ‘not exactly a band as such’ umbrella for the sparkling, slippery talents of Edwin Stevens, wandering musician, outsider poet, tired and lonesome soul. Emerging from the ragged edge of North Wales, Stevens kicked around Manchester’s DIY scene playing in various other bands and using Irma Vep to channel his own loose mix of weird folk, indie rock and free music explorations. It’s produced an erratic clutch of recordings chasing down a wide range of approaches. Stevens is now living in Glasgow, where this album was mostly recorded in just two days. Which perhaps explains how the playing here feels both loose and focused. Embarrassed Landscape finds Stevens’s musical (and geographical) wanderlust getting it together for his most complete statement yet. Don’t worry though, it’s still plenty confusing.

The album alternates between wilder, charged up numbers and slower, more intimate songs. They’re like a found box of faded out old photographs, unfamiliar people stood in drab rooms. Hidden and incomplete stories, strange resonances, threads of possibility. Stevens doesn’t bring us the linear. Of ‘I Do What I Want’ he says “It could be translated as a vague picture of selfish or ignorant defiance. Putting your own agenda over the well being of others. Running into the sun with your genitals in your hand. It has taken on a new meaning over the past year or so, I don’t want to tell you what to think about it but that’s what it means to me!”

‘Standards’ is a scuffed and beautiful country strum of the kind Pavement might once have concocted. Short and sweet it finds room for piano and urgent strings to carry it upwards before coming to a perfect close in less than two minutes, fading out on a coda of radio warble. The tambourine on ‘The Feeling Is Gone’ gives extra emphasis to the Velvets feel of the circling trance guitar. Coming right at the midpoint the track feels like a convergence of the albums two tendencies. A gentle ballad, ‘Tears Are The Sweetest Sauce’ is the real standout here. A country waltz of relationship dysfunction and black hearted confession, “I made you cry / and I know why / your tears are the sweetest sauce.” it seems to come more from weary resignation than either bitterness or heartbreak. Playing against the lyric is a melody so simple and charming it’s almost a lullaby. In its way as beautiful, as ugly and as confounding as being sat in a bar with a crying partner.

It’s the point he edges furthest into the limelight. The next song ‘Not Even’ is a flat out rager, the vocal a buried and distorted shout. Stevens is not a ‘heart on his sleeve’ singer songwriter type, thank God. At least not in the familiar sense. There is real honesty and its accompanying terror in his music. To offset this, distancing and self preservation moves abound. They’re his truths, you can make your own. As we come to the end ‘Canary’ winds out on a heavy lidded meander. It’s like The Dirty Three with sunstroke, the guitar and violin rising and falling in soft waves. As bold a move as starting the record with the ten chaotic minutes of ‘King Kong’ first seemed by the time you’ve got to know this album not only does it make sense but you start to wish he’d drawn it out much longer. Embarrassed Landscape finds a unique artist coming more fully into his own voice.