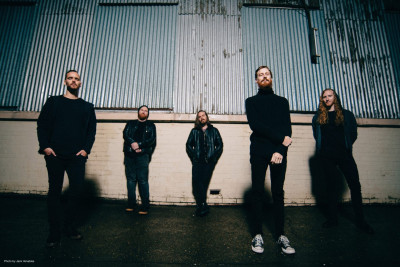 You always feel a little trepidatious when you put something new out in the world, but, for example, once 'The Tempest' was released any fears we had were quickly shut down. It’s wonderful when you step outside of your comfort zone, offer something fresh and people accept it. We have also picked up a few new fans along the way with these songs, so I feel we’ve tapped into something pretty special!

On May 22nd, Brisbane based prog-metallers Caligula’s Horse are set to release their fifth studio album Rise Radiant via InsideOut. It was produced by the group’s Sam Vallen and mixed by Jens Bogren (Opeth, Devin Townsend Project, Leprous). This album is “an anthem for the regeneration of self-belief, an exploration of the themes of legacy, and a rallying cry for survival.” Gavin Brown recently caught up with Caligula’s Horse drummer Josh Griffin to talk about Rise Radiant as well as how the band got started, their influences and more.

E&D: Your new album Rise Radiant will be released on May 22nd, can you tell us about the creation process for the album as to how the recording of it went down?

Josh: The biggest difference on this album is that I, Dale and Adrian have contributed to the writing process. All of our material is steered by the collaboration between Sam and Jim, but this time they opened up that process to us, which has been an incredible experience! For my part, tracking drums was incredibly fun but immensely challenging. These have been some of the most challenging parts to learn and get under my belt, but I got there haha. One of the greatest joys on Rise Radiant though, was hearing Dale’s bass parts on the tracks. The tone, presence and energy he brought to these songs is something else.

E&D: What has the reaction been like to the new material you have released so far?

Josh: Overwhelming, to say the least. You always feel a little trepidatious when you put something new out in the world, but, for example, once ‘The Tempest’ was released any fears we had were quickly shut down. It’s wonderful when you step outside of your comfort zone, offer something fresh and people accept it. We have also picked up a few new fans along the way with these songs, so I feel we’ve tapped into something pretty special!

E&D: Do you feel that Rise Radiant is the most eclectic album that Caligula’s Horse have ever made?

Josh: It definitely has its moments haha! I don’t think it’s any less eclectic than our previous albums. There’s a lot of colour in our music while retaining what I guess you’d call our signature sound. We get to explore ideas that inspire us without losing our identity, without going off the beaten track as it were. Most importantly the album is truly the culmination of what Caligula’s Horse has been striving for album to album.

E&D: Is there any significance to the title of the album?

Josh: It’s the summation of the themes throughout the songs. Themes of legacy, survival and self-belief. Even the artwork reflects that. It was something that resonated with us immensely.

E&D: You’ve just released the video for album track ‘Slow Violence’. Can you tell us a bit about the song, what it’s about and the video’s themes?

Josh: I love the energy and the space it has! So much of our music is very layered and at times quite dense, so I remember hearing the demo for the first time and really digging the space. So much room for the groove, and we’re all about that groove!

The video is all Adrian! He is already an incredible music video director but he knocked it out of the park on this one. It really matches the energy of the song and echoes the tension.

I know Jim and Sam have their own ideas on this, but for me’, Slow Violence’ is a song about hypocrisy.

E&D: You cover Split Enz’s ‘Message To My Girl’ and Peter Gabriel’s ‘Don’t Give Up’ as bonus tracks on the album. What made you choose those particular songs to cover?

Josh: Sam and Jim brought the idea of covering ‘Don’t Give Up’ to the table. The themes of that song resonated with us considering world events at the time and share our own version of the song and its themes with fans who may not have heard it before. And now more than ever, its message of unity and perseverance has never been more important.

‘Message to my Girl’ came about during our tour of Latin America last year. Jim was singing the chorus melody while we were walking around Mexico City, and it hit us like a tonne of bricks. With a chorus like that, how could we not right?

E&D: Lynsey Ward of Exploring Birdsong guests on the track, singing the Kate Bush part. How did you hook up with her and how was it working with her on the track?

Josh: Jim is a huge fan of Exploring Birdsong, and when considering the Kate Bush part and who would be best for it, Jim suggested Lynsey. She was incredible to work with. She gave the song further emotional weight. I remember hearing her parts and getting goosebumps!

E&D: If you could cover any songs in the future. What would you like to tackle?

Josh: Honestly, there are none that come to mind. These covers were chosen at a particular time so it’s almost impossible to know what we would/could pick. Who knows, next time we could go back to taking one of our songs and doing an acoustic version!

E&D: In what ways do you think that Rise Radiant differs from your previous work and what ways is it in a similar vein?

Josh: As I said earlier, the contributions from myself, Dale and Adrian have added a new voice to this album. Also, Rise Radiant is our sound pushed to its extremes. The other main difference is that this is not a concept album like In Contact was – with an overarching narrative, characters etc. This has recurring themes that ties the whole album together. However, even with those differences and additions, it’s still unequivocally a Caligula’s Horse album.

E&D: You have had to cancel your live plans due to the ongoing Co-Vid 19 pandemic. Have you had a chance to rearrange any live dates at the moment and where can fans find out any updates?

Josh: Like every band who was faced with that decision, it was incredibly heartbreaking to postpone our US tour. However, everyone’s safety and health is most important to us. At this stage, we hope to resume touring next year. Fingers crossed! Keep an eye on our social media pages or check-in at www.caligulashorse.com

E&D: How are you staying busy during this lockdown period, are you working on any new music?

Josh: Definitely trying to stay busy! Aside from spending some quality time with my family and catching up on home life, I’m always putting down anything that inspires me. I’m really focussed on practice and development at the moment. Experimenting with ideas on the kit and seeing what comes out. Also catching up on the plethora of video games I have in my collection haha.

E&D: On a more positive note, how did your show supporting Opeth in Brisbane last December?

Josh: It was a great show! Always a pleasure to catch up with those guys. The show was a little different this time compared to previous times we supported them as it was a seated show. Their crowd is always so friendly to us, even with a 30 min set!

E&D: Did you debut any new material at the show?

Josh: Sadly not this time. Though we did play ‘Graves’ for them.

E&D: You’ve played shows with everyone from Mastodon and Dillinger Escape Plan go Anathema. Who have been your favourite band to play shows with or tour?

Josh: I would definitely say Opeth as one of them, but my personal favourite has been Pain of Salvation. We supported them on a few shows on our European Tour in 2017. They’ve been one my favourite bands and they were a pleasure to share the stage with.

E&D: You’ve toured all over the world, what have been some of the most memorable shows that Caligula’s Horse have ever played?

Josh: My very first show with the band in 2016 is one of my fondest memories. I was so nervous before the show including walking out on stage. But as soon as we started the first song, all of my nerves disappeared. It felt effortless. Personally my most memorable was playing the now defunct Be Prog, My Friend in Barcelona on that 2017 tour. It was a beautiful venue to play, incredible line and crew. The audience was so responsive for the first band of the day. At one point I’m pretty sure I had tears in my eyes! Until I turned around and saw Mike Portnoy watching from side stage.

E&D: How did the band get together in the first place?

Josh: The band started out as a solo project for Sam. He invited Jim to come and sing on some of the tracks and they ended up writing some stuff together. They both enjoyed the process and decided to put a band together.

E&D: Was there much of a progressive rock/metal scene in Brisbane when you first emerged and is there more of one now?

Josh: Of course, at the time Karnivool and Dead Letter Circus were very successful here, but there was and still is an incredible local scene. The scene has grown exponentially over the years, with so many amazing bands coming up.

E&D: How was your music first received in your native Australia when you were taking your first steps as a band?

Josh: Sadly I wasn’t in the band at the time, but I remember seeing them live after getting a hold of the first album, Moments from Ephemeral City, in a small packed venue. From the beginning, people have really embraced the music.

E&D: Who have been some of the biggest influences on the music of Caligula’s Horse?

Josh: Too many and varied haha! We all bring numerous influences to the table, old and new. I know for a fact that one of Sam’s biggest influences is Steely Dan, which has subsequently become an influence for all of us! My own influences include Leprous, Toto, Muse, Smashing Pumpkins and of course Dream Theater.

E&D: What have been some of the proudest moments of your time with Caligula’s Horse so far?

Josh: The recording and touring for In Contact was high on my list for obvious reasons. It was my first album with the band that I put my own stamp on, the touring for that was immense. Playing that album in full for the Love Conquers All tour is definitely up there. However, I am so incredibly proud of my own work on Rise Radiant, not too mention everyone else’s performances and hard work that went into the creation. I can’t wait to get out there and tour it!