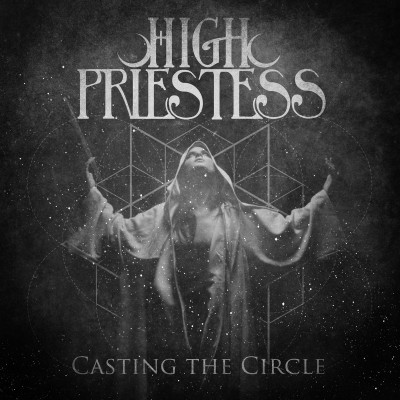 Casting the Circle by High Priestess

I first heard High Priestess when their record company sent out their previous demo in advance of their debut album, as a sort of primer. It did the trick, as such was the quality of that demo that I couldn’t wait to hear the finished album. When it did come I reviewed it on this very site, and the one problem with it was the only new material wasn’t up to the standards of the other tracks that made up both the demo and the album. That did make me wonder if High Priestess were already running out of ideas after producing and honing their early songs to perfection: Had they run out of things to say or interesting ways to say them?

My spirits and expectations were, however, raised when I got to catch the band at Desertfest 2019 and was blown away by their live performance. So, I am delighted to announce that High Priestess are back, better than ever on album number two, Casting the Circle.

If ever a band has grown into their name then High Priestess is it, with the whole album possessing an imposing mystical presence, brimming with confidence and a dark power. Casting the Circle sounds like it is being performed in a moonlit courtyard of a Moorish castle, as strange exotic smells fill the air from oil burners the band conduct their musical rites on Persian carpets as wonders are conjured, appearing in thunderclaps and puffs of smoke.

The band’s strengths remain the same, with grandiose guitar lines soaring into the skies from Katie Gilchrest, and her vocals combining with bassist and lead vocalist Marina Fiel, shimmering and seducing your ears. Seldom have songs of the occult and devil worship sounded so gloriously, heart-warmingly satisfying. One very clear antecedent for their sound is early Rainbow, with tracks like ‘Kill the King’ and ‘Man on the Silver Mountain’ laying down a clear template for this majestic set of songs. Imagine if Richie Blackmore had been into acid and Anton Le Vay instead of Bach – that then is the High Priestess sound.

As if this wasn’t all enough, High Priestess has a secret weapon in the shape of drummer Megan Mullins, one of the most exciting and flamboyant drummers in metal. Like all the best drummers (outside of krautrock) she isn’t content to keep the beat, adding her dramatic, flashy percussive splashes all over the songs. She helps create the right portentous atmosphere with huge crashing cymbals going off like gongs struck by giant, oiled Thuggees, heralding more unholy rituals.

Each of the five numbers here is a triumph, from the opening title track, which casts a hypnotic, Middle Eastern flavoured spell, right up to the closing choral ‘Ave Satanas’ – a song I suspect Ghost will kick themselves for not having written.

Positioned in between we have the now customary lengthy, epic psych-doom workouts. There is the lysergic, nine minutes-plus of  ‘Erebus’ which sounds like Blackwater Holylight by way of Black Sabbath stoned in a bazaar. ‘Invocation’ clocks in at over seventeen minutes and again uses Middle Eastern rhythms and melodies to create a swirling, heady hymnal. Megan’s drums are forever pattering and crashing, moving things on as Mariana and Katie’s voices sing high praises to Satan and Katie chops out a hokey, but highly effective riff which snakes off into agitated, sky-scraping solos.

Less ambitious in scale, but most impressive of all is ‘The Hourglass’, a measly 6.46 in length, it is the bands finest song to date. It comes in on a giant fuzzy groove that has you nodding your head in stoner celebration instantly and features Mariana and co’s most impassioned vocals. Unlike the rest of the songs, the lyric seem more personal and that may be why it has turned out to be weighted with more emotion, as the combined vocals coo “sand in the hourglass is falling” there is a real, beautiful melancholy to the song. At the close it sweeps to a surging, powerful crescendo as Mariana becomes ever more strident in her delivery and Katie’s guitars tear out a steely melody. It is one of the most devastatingly effective rock songs I have heard in a long time.

2020, despite all the horrors, is turning out to be one hell of a year for psych, doom and stoner metal, with so many fantastic albums already out and many more promised. But forget sub genres and our own little scenes and realise that in Casting the Circle, High Priestess have produced one of the best metal albums of the year so far, bar none.