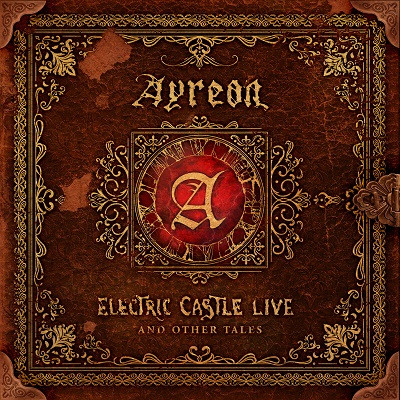 Electric Castle Live and Other Tales by Ayreon

“The emptiness that it’s plagued us forever, that emptiness we now cast away, the passions we craved shall be richly displayed in the game we’re about to play. Come with me now, be joyful, it’s time to enter the Electric Castle!” From the poetic minds of John de Lancie and the roaring crowd applauding to embark on this incredible journey, it was time to enter the story of Ayreon’s adventure into the Electric Castle at the 013 in Tilburg.

Recorded live at the same venue where they did Ayreon Universe three years ago, Arjen Anthony Lucassen decided it was time to bring his story of the Electric Castle to life. It was also the 20th anniversary of the album’s release and became one of Arjen’s breakthroughs during that time frame. In honor of the album’s anniversary back in 2018, he went back and remixed the album in just over two months.

And now with the live album as a 2-CD set, 5-disc Earbook, and as a limited super deluxe edition as a wooden box set, you can revisit the show both with your eyes and ears from start to finish. Released as Electric Castle Live and Other Tales on the Mascot Label Group/Music Theories release, close your eyes and imagine yourself being at the 013 Poppodium not just showing support for Ayreon, but bringing the story to life.

And to be allowed to have some of the original cast and members including Focus’ Thijs Van Leer, drummer Ed Warby, Fish (Marillion), Anneke Van Giersbergen, Edward Reekers (Kayak), Damian Wilson (Threshold), Edwin Balogh, and George Oosthoek, it must have been very exciting for them to reprise their roles once more by re-entering the Castle again by bringing it full circle.

‘Amazing Flight’ has this amazing collaboration between John JayCee Cuijpers and Arjen himself as the Barbarian and the Hippie are flying through an amazing crossover. It’s this section between the MKII-era of Deep Purple, heavy riffs of the Scorpions with a Beatle-esque twist. It is very strange magic, but it works. After Simone Simons does these incredible vocalizations, the music transforms.

It turns into this duel between the Italian Prog genre and the Mahavishnu Orchestra jig that Thijs and violinist Ben Mathot do. Like a race to the finish line, you can never tell who is going to win or not before the crowd finally cheers for them to keep going. ‘Tunnel of Light’ is this bright folk adventure for Fish’s arrangements on his vocals. It’s quite a spiritual journey for the mortals to embark on. The midsection that Simone, Edwin Balogh, Damian, and Anneke do, create this segment for the romantic side they have in their hearts and minds while Damian pours his soul to go ‘Across the Rainbow Bridge.’

The audience claps along to the guitar riff and acoustic train chugging before crossing the bridge. The music transforms into this heavy thunderstorm as Arjen’s character goes into the bright light of wonder as the narration reveals that the Mortals have reached their goal. I always think of John de Lancie’s performance as the Forever of the Stars, which shows that he’s more than just Q from Star Trek: The Next Generation and the voice of Discord from My Little Pony: Friendship is Magic, but revealing that he’s having a blast to be a part of the Ayreon family. He has this combination between Vincent Price, Alice Cooper, and Peter Hammill of Van Der Graaf Generator when he narrates the story.

Now onto ‘The Garden of Emotions’. It starts with a late ‘60s vibe with a Crimson-sque nod to ‘Epitaph’ as Anneke’s fear of being shut down by Amon-Ra. For a second, I almost thought that she was going to speak the Kobaian language by tipping her hat to the masters of Zeuhl, Magma. But onto the music once more, you can imagine in the story that the Mortals are about to pay a heavy price by embarking on this quest they have taken.

Meanwhile, Johan van Stratum, Joost van den Broek, and Ed Warby channel the midsection of Yes’ ‘Yours is No Disgrace’ by honoring Tony Kaye, Chris Squire, and a double toss-up between Bill Bruford and Within Temptation’s Stephen van Haestregt before the vocals are combined into a climactic war honoring Queen’s ‘The Prophet Song’.

Reekers channels the late great David Bowie as he enters the Space Oddity-era on ‘Time Beyond Time’ You can tell that Futureman is continuing the job where Major Tom had left off. With this psych-folk structure, he and Damian’s vocals are arguing with each other as if they need to work together by putting their differences aside and reaching their goal.

After finishing up the story of the Electric Castle, the team goes into other parallel universes of Arjen’s projects making the audience want more. To see where the Castle had left off in different voyages that Lucassen is bringing the crowd to embark on once more. From The Gentle Storm’s operatic beauty of the ‘Shores of India’ thanks to Anneke’s incredible vocals. The waves crash more for the powder-keg riffs while Anneke is singing out to the gods in the middle of the storm. But then she continues with one more from the Ambeon release, Fate of a Dreamer entitled, ‘Ashes’. This was the first time I heard this the live version on the album. I was completely blown away from what I’ve listened to hearing this song. The synthesizers channel the Italian Progressive Rock genre once more by honoring the Darwin-era of Banco Del Mutuo Soccorso, Unreal City’s il Paese del Tramonto, and a bit of Mike Oldfield thrown into the mix. And it is one hell of a song that they give the audience at the 013, a real jolt of electricity.

Despite Fish’s vocals changing over the years, he still manages to knock it out of the park with his take of ‘Kayleigh’ with Ayreon. It must have been neat to revisit that classic once more during his time with Marillion from the Misplaced Childhood years with help from Anneke, Simone, and Marcela Bovio doing the background vocals. They lend Fish a helping hand by giving the song a warm chance of sunlight.

When you hear the late great Rutger Hauer’s voice before the beginnings of the Psychedelic turned Arena Rock twist of Caravan’s In The Land of Grey and Pink-era on ‘Pink Beatles in a Purple Zeppelin’, it shows that Arjen is tipping his hat to Rutger up in the heavenly skies to know that his spirit is still there and the audience themselves are keeping the fires burning.

It took me a while to listen to the live version of the Electric Castle. And I have to say this, it beats out the studio version of the album. I’ve mentioned this earlier, but Arjen Anthony Lucassen has brought the Electric Castle full circle at the 013. It shows that he’s not done yet with the Ayreon stories to bring to the arena. And I can imagine that the audience understands Arjen has more tricks up his sleeve in the roaring ‘20s.

The late great Robin Williams once said, “You’re only given a little spark of madness and if you lose that, you’re nothing.” For Arjen, he hasn’t lost that spark with Ayreon. So if you think Ayreon Universe was only just the beginning, Electric Castle Live and Other Tales is the adventure you need to embark on.