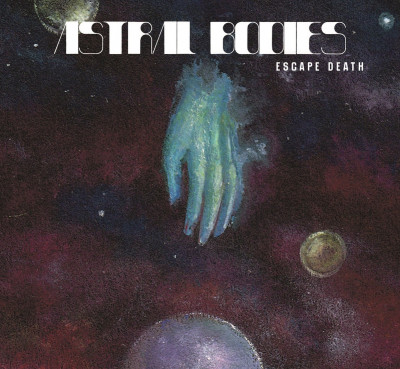 I love space, the space between the ground and the clouds, the space between the stars and the blackness beyond. My knowledge of all the objects out there is sketchy at best, but I still appreciate my insignificance in the scale of the universe. With Escape Death, Astral Bodies has provided a soundtrack to those moments of wonder as the warming mix of instrumental post-rock, post-metal and doom offer up a sensational listen and aid you on your journey by placing the scenery rather than forcing a story line.

The tonality and recording of this album is absolutely astounding, there is a real richness and this aids a wonderful flow between the three members and the first three tracks. ‘Neptune’, ‘Europa’ and ‘Oumuamua’ all blend in on the same journey but have the own individual experiences. Along with ‘Equinox’ they form the crux of the sound base as a doomier instrumental post-rock. To try and put a rough reference to it there are a couple of bands that spring to mind, as the fuzzed up opening to ‘Mythic Phantoms’ certainly could have been created by sending Torche into space. Some of the heavier instrumental parts in ‘Equinox’ are familiar to fans of Pelican but the drums are far more effective and none of these sounds are near plagiaries.

Astral Bodies have a great handle on being able to contrast the heavy and light and this really helps the spatial themes. Even when at its heaviest there appears to be a glowing light amongst the darkness and the theme of space is ever present. ‘Pale Horse’ on the other hand is the only real quiet moment which is also the only track with vocals. Out with that you are swept away on a mixture of guitar riffs, fuzzed deep bass and some excellent stick work. If you like fuzz or if you like doom or if you like post-rock then you will not be disappointed by lending this band some time.