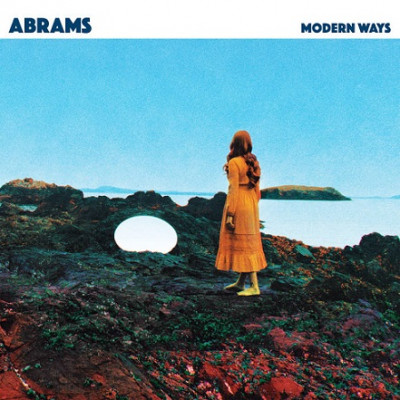 There’s a plethora of great bands out there recording heavy music bursting with melody and Denver’s Abrams are a band to add to that list, as their third album, Modern Ways contains some tremendous hooks and mighty riffs. The quartet of Zachary Amster (guitar/vocals), Taylor Iversen (bass/vocals), Patrick Alberts (guitar) and Ryan Dewitt (drums) definitely have a chemistry and wonderful way with melody. Their sound is in the vein of latter day Mastodon or Baroness, but they also manage stretch their sound back to the grunge era yet still sound fresh and creative.

Opener ‘Modern Ways’ blasts out of the traps with mighty riffs that sound like a fully amped giant elastic band getting a severe work out. Zachary’s throaty roar perfectly complementing the ferocity of the pounding drums and heaving bass. It’s a powerful statement of intent and a cracking start to the album. ‘Poison Bullets’ reminds me of vintage grunge rockers Paw, with the slide guitar that soars over the chugging riffs and Zachary’s awesome way with a tune. The production is superb as the drums pack a mean punch and the guitars are wondrously thick and heavy.

The brilliant off kilter clean guitars on ‘Joshua Tree’ recall prime Sparta and possibly even a nod to Pixies, the effect is the song sounds like a different band, until the epic earworm of a chorus roars in with a heavier tone of guitar and a harder vocal. I’m not going to lie, on the verse of ‘That Part Of Me’, the vocals sound like Lenny Kravitz, as the clipped riffs recall Soundgarden. Mind you, Kravitz couldn’t come even close to the ragged rasp Zachary conjures in the chorus. On ‘Find A Way’ the twisted riffs again recall Kim Thayil’s finest moments and the chorus is elegant, majestic and hugely addictive. The first moment of calm appears on ‘My War’ which has a mystical melody that wouldn’t be out of place on a folk record. Of course the chorus absolutely crushes and the guitars duel with Zachary’s voice for power and aggression.

With the guitars turned low, the melancholic verse of ‘Silver Lake’ is raw with emotion as Zachary sounds broken. The languid chorus sweeps you along and the track shows that Abrams have a wide range of styles to effortlessly call upon. Having said that one style I’d rather they hadn’t called on comes with the angst-ridden riffs and throaty vocals on ‘Silence’ which don’t appeal so much to me, almost sounding like Korn to these ears.

On ‘Pale Moonlight’, the guitars shimmer like reflections on water while the Kravitz inclinations return again. Sadly the chorus is something of a non-event threatening to take off but just ending abruptly as it gets going. The rolling bass line in the mellow verse of ‘Marionette’ contrasts with the rocking chorus that finds the band regain their form, after the little wobble of the previous two tracks. As the song throws structure to the wind, the voices rise and the guitars swell to a tumultuous climax of wondrous melodies to end the album on a very high note.

As a new name to me Abrams have created a great modern rock album combining super heavy riffs, crushing drums and songs with brilliant melodies. The entire record has a very polished sound (courtesy of Dave Otero) and certainly points the way towards a very bright future. Whilst not breaking down any doors in terms of new sounds, I really like the way the band have set about their business of no nonsense rock n roll. There’s no arguing with good tunes and big fucking riffs, Abrams have them both in abundance.