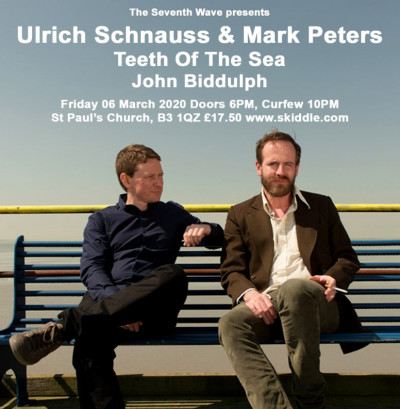 Don’t you just hate it when the bass drop knocks your neighbour’s glasses case off the hymn book stand? St Paul’s is an unusual but beautiful venue for tonight’s entertainments. Of course, concerts in churches are not unheard of, the repurposing of old buildings is something we’re all used to by now, but St Paul’s isn’t just a still-functioning church, it’s a grade 1 listed, 18th Century, church. The pews are high-backed wooden stalls with gates at the end of the rows, making for a contained and orderly audience experience beneath the elegantly vaulted ceiling.

It’s a calming and reverent space. . . into which Teeth Of The Sea are blasting their lucid dreaming space-rock soundtracks. Once you settle into the unfamiliar band/audience dynamics, and get comfy in the pews, it offers a chance to soak up the widescreen layers of their sound. It was nice to give it your full attention without fellow punters pushing past spilling beer down your leg or chattering inanely and only the odd, shamefaced, spot of phone bothering. Sam Barton’s trumpet feels at home in here, calling to the heavens and ringing out pure above the mesh of processed sounds from Mike and Jimmy.

Down in the fourth row the sound is great; clear, loud and detailed. Although later discussions reveal it was less reliable in the balcony and the bass was causing the fittings to buzz and rattle elsewhere. The set draws mostly on 2019’s fantastic Wraith album, loosely following its template of gathering intensity. No strangers to unusual live situations, last year they played original new music to accompany the ‘Apollo Moon Shot’ screening at The Science Museum. Some of that music makes it into the set tonight about which I can tell you two things. Firstly, it’s great and second, the stuff they chose to include continued in the vein of Wraith, which is just fine by me.

Much of the joy of Teeth Of The Sea is that they have one foot in this rarefied world of screening soundtracks and exploratory art rock diversions, but keep the other planted on the monitor of rock ‘n’ roll, embodied in Jimmy Martin’s flying V guitar and Marshall stack, set up in place of the altar. There’s a moment when the mostly subtle washes of the light show turn to vivid bleeding blue-and-yellow bands. and it’s briefly like watching an old German TV clip of some hairy kosmische adventurers getting their freak on. Still, as they build to an intensity that’s starting to feel a little out of place in here, it’s less that spirit of rock than a double shot of thumping techno that charges to the front. By the time they finish with ‘Gladiators Ready’ it’s ridiculous. The sound is huge, like dinosaurs stomping up and down the aisle, and I’m helplessly grinning in mad amazement at the absurdity and brilliance of it. Magnificent.

Tonight’s event is brought to us by The Seventh Wave Festival of Electronic Music. They put on some interesting things but they’re a mysterious entity, like a cult or an amateur electronics club that accidentally put on a festival. Maybe they need to work on their promo because there should really be a lot more people here for this bill. This is their ninth instalment and has something of a Tangerine Dream theme running through it. Having made a name for himself early in the century with the hazy electronic shoegazing loveliness of Far Away Trains Passing By and A Strangely Isolated Place, Ulrich Schnauss wasted little time in collaborating far and wide. Most notably this included him joining Tangerine Dream. Less famously he also joined Mark Peters‘ band Engineers for their last couple of records, and the two have since made a couple of albums as a duo.

This is a rare live outing for the two of them and I’m not entirely sure what to expect. Yawning on the bus earlier, I feared drifting away if things got too ambient, and it’s just as well Teeth of The Sea have got us all pumped up because they get very floaty and dreamily ambient indeed. This is exactly the sort of stuff for which this venue is perfect. Deep listening music that taps into the same meditative qualities as the building. As the discomfort of standing on warehouse floors makes itself known in your legs and back and even the softest murmurs in the crowd distract, this kind of performance can be hard to enjoy. Here in a space that already encourages stillness, in your own shut-off little pew, you can drift away with it. There is a discreet quality to the experience that’s very different from curling up with the album on your headphones.

Peters plays the kind of guitar where you can scarcely tell the instrument is there at all, merely a signal generator for an array of effects and processing. Early in the set there’s a section where you can make out his playing, soft strums and liquid notes that swim and sparkle, but soon even these melt into pools of sound. I’ve no clue if his playing is subject to further tinkering in Schnauss’s machines or if they’re just playing together. It seems clear that much, if not all, of the set is improvised. They fill the space with clouds of lush atmospherics; it’s deeply calming. There’s a cumulative effect with music this gentle, and while I’d say to you that the last half-hour or so was absolutely gorgeous, I’m fairly certain it wouldn’t have the same effect without the first-half massaging your brain and helping quiet the internal screaming voices. The end result is a surprisingly positive sense of comfort. It wouldn’t hurt to turn up for an hour of this every week.