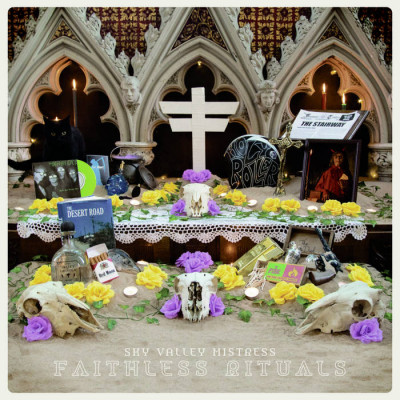 You have-to admire the courage or fun-loving goofiness of Blackburn’s Sky Valley Mistress attending an Eagles of Death Metal gig on Halloween night in full EODM members alter-ego costumes, and then blag backstage entry to meet their heroes. This led the way for the Lancashire rockers to head out to the Californian sunshine and record their debut album at the Desert Rock temple of recording studios, Rancho De La Luna, with its co-founder, EODM and Mojave Lords member plus Gimme Radio DJ, Dave Catching, as co-producer.

Another shrewd signing by the canny ears to the ground, good people of New Heavy Sounds label because although Sky Valley Mistress have an obvious Kyuss link in their name, they are not mere fan loving copycats and do instead bring a bright freshness and an electrifying rock ‘n’ roll swagger to their debut Faithless Rituals. They may have only spent ten days recording in the Californian desert but they must have breathed in and absorbed-soaked all the Californian sun-rays and lifestyle feasibly possible, while retaining the grit and resilience for surviving those Lancashire winters.

The opening Dave Catching spoken word title track monologue creates a buzz of excitement in what lies within the wax, explaining the album’s intent ‘‘I want this to perforate your eardrums’’, ‘‘a loud fucking noise that sounds pretty damn rude’ set to a squalling guitar, ‘because this is rock ‘n’ roll.’’

Consequently, what is let loose are many exuberant, free-spirited riffy rock n roll bangers to set the pulse racing. ‘You Got Nothin’ bursts out primed and loud, screaming out a don’t mess with me attitude ‘‘your only mark on the world will be a hole in the ground’’, ouch! ‘Lost In Shock’ exhibits the opening monologue’s impassioned spirit as vocalist Kayley ‘Hell Kitten’ Davies drawls, ‘hit with a feeling like a ten-ton freight train’ sets out their stall for some no-nonsense quality hard rocking.

But they save their best pulverising belters towards the end of the album with the hip-swinging strut of ‘She Is So’, and ‘Electric Church’ which rips with feverish riffage, a driving tempo, with the cherry on the cake being a fittingly well-executed deranged laugh towards the end. The album’s low-end production enables the hard driving rhythm section to excel and mixed with all of the band’s ingredients together and you have one cooking band.

But within this rousing commitment to rock n roll is an open-minded exploration for stretching out their sound with plenty of variation, which makes Faithless Rituals a gloriously fun ride. The loud/quiet, bluesy inflected ‘It Won’t Stop’ turns into a climatic crescendo mash-up as Kayley warns “I’m the devil in your dreams.” Demonstrating further their expansive flexibility is the nearly eleven minutes long ‘Blue Desert’ which shows a staggering maturity in its unrushed delivery, before a subsequent livelier second half bears witness to a nifty solo and bass runs from guitarist Sean ‘Starsky’ Berry and bassist Russell ‘Russell’ Russell respectively.

The band, with drummer Maxwell Harvey William Newsome III completing the line-up, along with Kayley, Sean and Russell are clearly well versed in the rock ‘n’ roll classics but also have their ears wide open to modern further afield genres and artists. The latter is most notably heard in Kayley’s varied vocal stylings and PJ Harvey brushstroke tones. This open-ears approach does give them an extra edge.

The result is Sky Valley Mistress throw the gauntlet down and come out swinging with a debut of impressive revved up energy, gutsy attitude, and a refreshing unpredictable delivery to their kick-ass rock ‘n’ roll. They are a welcome addition to give the Rock underground scene a continued new lease of life. Go and join in with the ritual, and play it loud! 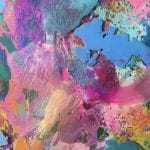