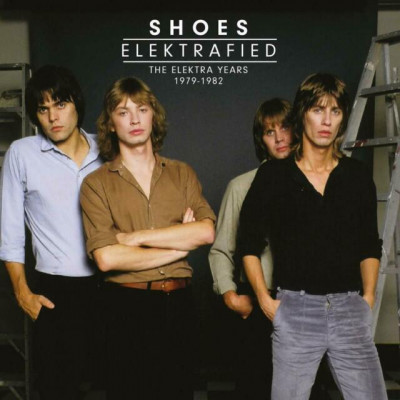 Illinois is home to numerous great rock bands, not the least of which is Zion power popsters, Shoes. Originally comprised of two brothers, John and Jeff Murphy, their friend Gary Klebe, and drummer Skip Meyer, they cut their own vinyl and recorded Black Vinyl Shoes in their living room, well before bedroom pop became a thing. They were signed to Elektra in 1979, and released three classic pop albums – Present Tense, Tongue Twister, and Boomerang – and a number of singles that should have propelled them to fame. Sadly, however, they never left behind their critical darling status and had to settle for cult fame, which is theirs to this day.

Today’s version of Shoes includes three out of four original members, with John Richardson replacing Skip (sadly deceased) on drums. They’ve enjoyed recent success with Cherry Red’s reissue of Black Vinyl Shoes in extended 3-CD format, and now this 4-CD anthology of the band’s recordings for Elektra, fleshed out with a swathe of pre-album demos, “lost” songs, alternative versions and live tracks dating from the same period. The set is housed in a clamshell box and contains a 32 page booklet with rare photos and a 10,000 word essay on their adventures during the Elektra years. For those who follow power pop as I do, this is an essential release. While we might have most or all these albums in our record collection, I doubt most fans own all the extras in this collection. So let’s get cracking as I unbox this excellent release and give you the lowdown on what to expect.

I will admit to prejudice with Disk 1, which is Present Tense, my all-time favorite Shoes album and quite possibly their best work. It contains the trifecta of beautifully rendered indie pop in ‘Tomorrow Night’, ‘Too Late’, and ‘Now and Then’. Sounding at times like Britain’s brilliant Records and at others like their musical heroes, Cheap Trick, the group still managed to salute their influences and come up with an original sound. The winning combination of three songwriters who could also harmonize like angels definitely had an effect on me, who is still following the band avidly nearly forty years later!

‘In My Arms Again’ is also great, a sleeper tune from Jeff that caught up to me. While it’s a product of its time, it holds up well. The entire record was recorded in a 24-track English studio with a professional producer, but the band sounded mostly the same, albeit with much greater audio fidelity and a spacious sound. ‘Tomorrow Night’ sounds awesome here, and has all the hallmarks of the band’s sound: great lead and harmony vocals, fuzzed out guitars, and a strong melody. Then we have Gary’s wonderful ‘Too Late’, which reminds me the most of the Records. All to the good! The song is a bit somber, but it will have your feet tapping nonetheless. ‘Your Very Eyes’ is one of John’s tunes, and it’s a dandy. Softer-edged with acoustic guitar and glossy production, it should have been a hit. Hearing ‘Now and Then’ after so long is delightful, with beefy guitars, huge hooks, and a bit of psych pop thrown in for good measure.

‘Every Girl’ is lovely and heartfelt with chiming 12-string guitar, while ‘I Don’t Miss You’ kicks things up a notch. Lyrically, songs often lament about failed relationships, sometimes acerbically. This sharpens up what could be treacly and makes it more intriguing. We can all relate to when things don’t work out, which is often for some people. ‘I Don’t Want To Hear It’ is fun new wave, with some great guitar breaks and a stuttering pace. Cool! The home demos are less polished but complete versions of every song, and are equally good. Can I say I prefer the polished studio versions over the demos? Hard to say. It’s all fun and worthwhile.

Disk 2 is the Tongue Twister album plus demos. This is not an album I am completely familiar with, though over the years, I’ve heard most of these songs live or on retrospectives. ‘Burned Out Love’ is Gary’s baby, and it kicks. From his sweet vocals to some cool guitar pyrotechnics, this is a keeper. ‘Only In My Sleep’ is a fair piece of psych pop, with stellar guitar and swell vocals from Jeff. ‘Karen’ was written after John broke up with a girl, and he sounded heartbroken. ‘She Satisfies’ is a favorite tune of mine, penned by Gary and offering a nod to the great Cheap Trick. Gary sounds a lot like Robin Zander on the chorus. ‘Girls of Today’ is equally great, again reminding me of Records circa Shades in Bed. I really dig the demo of ‘When It Hits’; there is just something so innocent and charming about the home version. ‘She Satisfies’ is loose and raw as a demo, and I appreciate Gary’s uncertainty about whether this relationship will work out. The whole disk is great, and I’ve learned to like it nearly as much as Present Tense. Great work, guys!

Disk 3 is Boomerang plus its demos. Another album I have not heard much of, though I adore ‘Curiosity’, another winning tune from Gary that channels Wicks/Gower/Birch. I mean this as the highest compliment as I am a huge Records fan. It could be the time period, who knows? All I know is that it’s awesome. And so is ‘Mayday’, which I heard live during the New York Power Pop Festival, which Shoes toplined. Watching these guys in action was a blast. The packed house was overly enthusiastic and the band clearly lapped it up. They rarely emerge for such shows, so I count myself lucky to have seen them. But more on this disk! Back to ‘Mayday’, I never expected the bit of psych noodling in the middle. It shows these guys have many layers and songs that sound simple are deceptive.

‘Double Talk’ sure is cute, with a punchy melody and the requisite harmony vocals. It could easily be about a girl, or the band’s unraveling relationship with Elektra. ‘The Summer Rain’ is another lovely tune from Jeff, which I first heard years later! And of course, they played it live in a nearly three hour set in Brooklyn. The prolific Jeff also wrote ‘Under the Gun’, a catchy tune that reveals the unwelcome record company pressure the band was under. Home demo versions are all worth a listen, starting with the kick of John’s ‘In Her Shadow (Demo 2)’. The demo of ‘Curiosity’ doesn’t curl quite as invitingly around my ears as the full studio version, but the bones of a great song are intact. ‘Double Talk’, ‘Mayday’, ‘Under the Gun’, and all the rest hold up well.

Disk 4 encompasses the rarities, a set of demos plus live tracks from ‘Shoes on Ice’. It starts with Gary’s excellent ‘Jet Set (Manor Version)’, which was slated for Present Tense. I am not sure why it was scrapped back then, as I feel it’s easily among the band’s best tracks. I love the crunchy guitars and as always, Gary sings wonderfully well. ‘Take You Away (Demo Version 1)’ is also evocative and familiar, though I cannot recall where I first heard it. The two other versions of ‘Jet Set’ are good, but I still like the Manor version the best. ‘I Wanna Give IT To You’ is unmistakably Jeff singing, though I think he channels a bit of Freddie Mercury at the beginning, and the almost funky riffs and horns will throw you off. I am not a fan of live albums, though the tracks here are solid. It sure is nice to hear the boys cheered on by a crowd worthy of Live at Budokan. Especially on the ever terrific ‘She Satisfies’, which really blows the doors off live! The boys end with ‘Hate to Run”, a perfect coda to this massive collection. If you count yourself as a fan of power pop, and don’t already have this on order, rectify that immediately. And if we’re lucky, maybe Shoes will grace us with another studio album some day. 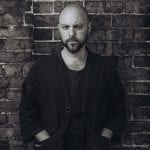