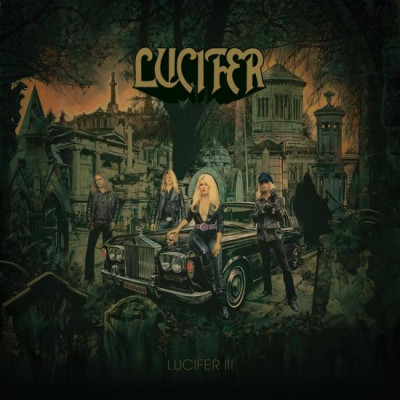 There is a fascinating book to be written about the birth, re-birth and growing popularity in occult hard rock in which Lucifer play a part. To me, its allure is quite obvious, as no doubt it is to all who grew up listening to Blue Oyster Cult and Black Sabbath, whilst watching Hammer Horror films and lusting over Caroline Munro or Christoper Lee. It’s part of my cultural heritage, I’m very happy to say.

So, I’m a big fan of the genre – As much as the doomy melodies and fantastical imagery, I’m very partial to the whole crushed velvet and over-sized crucifix look, and if sported by dead-eyed willowy blondes with a plunging necklines then all the better. But there are times when even I have to put my hands up and say “stop that now, it’s getting silly“. In general I enjoy this album, but on ‘Leather Demon’ Lucifer stray too far into camp for me to ignore and it takes me some time during any listen to Lucifer III for me to forgive them and willingly suspend my disbelief again.

It starts well enough with ‘Ghosts’, a soaring show-starter, clean and epic in intent, with a whiff of sixties psychedelia. ‘Ghosts’ and next tune ‘Midnight Phantom’, are seemingly written from the perspective of lusty vampires, as is the rather scarily presciently named ‘Coffin Fever’! ‘Ghosts’ builds rather theatrically with classic soloing from guitarists Martin Nordin and Linus Björklund and is good, but feels a little too stagey for my tastes.

‘Midnight Phantom’ is the best tune here – mixing grimy riffs, a howling wolf sample, hand claps and a more sultry delivery from Johanna Sadonis. It has a simple, rhythmic power, like funk, which married to Johanna’s deep breathy sighs makes for an unusual, gothic dance floor smash. With perfectly on-point Ghost/BOC style soloing and baroque keys to round it out it’s one of the rock tunes of the year.

Now, the next tune starts well, and has a John Barry-ish slinky drama, but it’s that chorus “They call you Leather Demon“. Do they really?  I’m sorry, but at this point, I’m out! Luckily a short time later Lucifer III rallies and surprises with  ‘Pacific Blues’, a song that moves away from the bands standard supernatural shenanigans and is the sort of mid-paced, melodic powerhouse that The Scorpions were so good at in their heyday. It’s a breath of fresh air, if maybe a little to clean sounding for more die-hard doom fans.

The second best tune on the album, ‘Stay Astray’, appears near the end and with a strut in its step and “more cowbell” vibe it returns to the dancier vein of ‘Midnight Phantom’. Plus it has a great Schenker-esque riff and the right rebellious rock n roll attitude to match.

So then, Lucifer III is a bit of a mixed bag. The band are certainly willing to stretch out and explore styles outside of the classic occult rock stable and in fact when they do they often produce their best songs. It may seem unnatural for the genre, but for me they are at their best when they loosen up, lighten up and get funky.