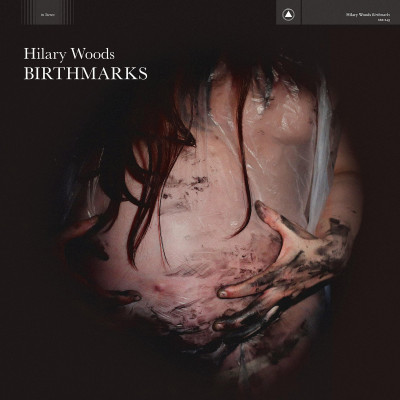 Hilary Woods had an exceptionaly steep learning curve in her formative adult years as she spent her late teens touring the world in indie band JJ72 before raising a child as a single mother. Whilst never getting to introduce her own ideas to the band she stayed for two albums spanning four years before leaving to scratch the itch of her own creativity. However, a short time after her departure Woods was to become a single parent which undoubtedly squeezed out the time available to create. Over a decade on Woods has increased her output and second album Birthmarks was recorded whilst heavily pregnant and provides a stark look back over some of the scars of the past in an attempt to find healing for the future.

From the title to the artwork the first impressions are fairly spot on, this is a dark and brooding piece of work. Linking up with Norwegian producer Lasse Marhaug has added the final layer of the formula that elevates from Woods previous creations. There is a mix of piano, cello, field records, synthetic beats and delicate vocals which create the perfect bedrock for the darkened folk stories of growth, pain and birth to emerge and sink into.

‘Through The Dark, Love’ is one of a number of standout tracks which has a suspenseful build up before it breaks away like a tree lined path holding back the fog. The slow ringing acoustic guitar and cello offer solid walls for the misty vocals to smoother against and push off. Without headphones or a lyric sheet the words can be slightly muffled but the more you lean in to hear the deeper the track grips you. The lo-fi vocal delivery falls somewhere in between A.A. Williams and Birds of Passage but yet remains unique from both of those artists. Here Woods hits ground all of her own and should really be gaining the attention levels of both the aforementioned artists.

Whilst tracks like ‘Orange Tree’ and ‘Lay Bare’ offer a soothing meditation there are moments such as ‘Cleansing Ritual’ which judders and cuts as it moves past causing a disturbance in the flow of the album. Another track which remains closer to the soothing yet variates is ‘Mud and Stones’ which has saxophone ringing round like a midnight busker in the wind and rain. The atmosphere through the record eases pressure rather than building tension yet the drop to closing track ‘There Is No Moon’ certainly grabs your attention. Here the abrasion of ‘Cleansing Ritual’ leaves your raw skin open to the quiet piano before the background static builds again.

Birthmarks reflects the challenges and pain that Woods has faced but ultimately it also emphasises the strength that has been gained from the years gone by. It may not flow smoothly in some places but then again neither does life and if art is merely a reflection on life it is far better to have honesty than a false reality.