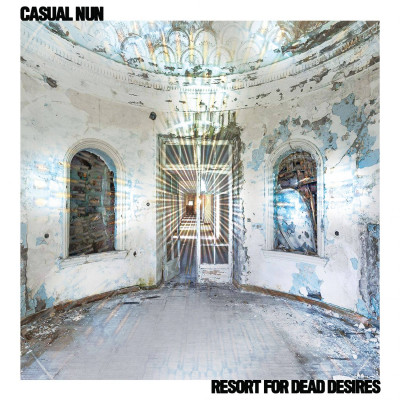 Resort For Dead Desires is the third full-length offering from London psyche outfit Casual Nun. I remember when I first moved to London a few years ago, there was a lot of great psych gigs going on by way of Cosmic Carnage and Baba Yaga’s Hut and my favourites often included a pairing of Taman Shud and Casual Nun. I also remember seeing Luminous Bodies and Evil Blizzard quite a lot in this period as well as Rocket Recordings bands such as Gnod, Pigsx7 and Teeth of The Sea. Casual Nun’s niche was playing Psych in a way that kind of sounded like the latter years of Punk. Heavy pounding basslines, fast beats drowned in effects laden melodies, sprawling guitar lines and epic venturing instrumentals punctuated by Vasilli’s bad trip squalls. Here the band traverse difficult terrain; the problematic third album and moreover, a mutating landscape.

It seemed like bellowing vocals, colossal basslines and dirgeful mammoth song structures were key facets of the genre at the time of Psychometric Testing By… (March 2017, Box Records), Pigs had earlier in 2017 released their landmark debut Feed the Rats (January 2017, Rocket Recordings) setting the pace for a lot of records to come that year. It was relentless, expansive and always darkly self-aware. Gnod took this further releasing perhaps the most cutting psych album in history Just Say No To The Psycho Right Wing Capitalist Fascist Industrial Death Machine (March 2017, Rocket Recordings), it featured big riffs, strong societal commentary and doom-driven repetition turning punk rock and grunge into a psychedelic form of drone; essentially, the essence of Psych as its own free-standing genre away from the tedium of jangly psychedelic rock.

To me, it has begun to feel like 2015 to 2017 was the real peak of the genre, birthed by bands like Mugstar, Oneida and The Heads and realised by the work of Hominid Sounds, Box Records, God Unknown and Rocket Recordings. Can anything be now as it was then and still be relevant? Will any year ever be as strong for the genre as 2015 perhaps not but, this is not just a period of a difficult third album for Casual Nun, it’s a period of seemingly every band in the genre changing their sound and direction, Pigsx7, Teeth of The Sea, Luminous Bodies, all sound different now, new players entered the game with the likes of Bonnacons of Doom and We Wild Blood taking greater focus and Taman Shud have unfortunately taken their shamanic experience to the netherworld. Things are different now, we’re post-Brexit, disillusionment is over, cold heart reality is here. Not to mention a new scene seemingly taking focus in the capital, one that revolves around the likes of Black MIDI, Black Country, New Road and Girl Band. Are we now post-psych or is this phase two? Where do we go from here?

If you’re expecting Resort For Dead Desires to be Psychometric Testing By… pt2 you’re out of luck. Sure everything you like is their but, it’s no slow burning or foreboding or some distant warning that things are about to go to shit. It’s 2020, we’re already in the shit, the time for immediacy is now, panic and fear and savagery is the tune we whistle in the shower. Pigsx7 showed it with Viscerals, Luminous Bodies have shown it with Nah Nah Nah, Yeh Yeh Yeh, now is the winter of our discontent.

Straight out the gate, ‘Party Favors’ is taking a completely different tone for Casual Nun, it’s almost like Black MIDI playing King Gizzard and The Lizard Wizard and that pretty much says exactly where I think underground music is right now, somewhere between those scenes. It’s an interesting choice for a first track, cause to me, it’s nothing like what I think of when someone says Casual Nun, it’s fun and bouncy and kind of wiggly albeit peppered with some screams but, I think it’s a good way of getting people’s attention, to new listeners the shock will be track two ‘Zoetrope’ and to old fans it’ll be track one. ‘Zoetrope’ is again, fast, punky, trendy, but definitely still full of Casual Nun-features, the screams, the effects and the guitar work, everything is still kind of heavy, but it just seems to have this sense of anger where the doom has subsided and I feel like that’s true for a lot of music at the moment.

‘Pink Celestial Heron (PCH)’ is a kind of psychedelic rock interlude that acts as a kind of third track respite, presumably intended to aid ‘Sleet Knife’ in tearing the listener a new asshole. The fourth track is somewhat reminiscent of Terminal Cheesecake’s absolute banger ‘VDK Neck’, but I think the breakdown of this track is just so satisfying. I wonder if it’s just cause it feels like quintessential psyche: big scream, brutalistic drumming and fucking Matt Ridout shredding the house down. I feel like a few years ago, the band would have turned this into an epic riff odyssey, but here they’ve slashed the rope and dropped the track from its noose into a cold ambient track ‘Panas, Tejas’. In a way, it’s frustrating because it feels like the tracks could go further, but it’s also enthralling as an album experience because you’re dragged head first through the different passages. There’s definitely more directions being explored, more sides of the band on show, which offers a lot of potential avenues for where they go next, but I feel like long term fans of Casual Nun may struggle with the kind of teasings of the old awash with the new.

I swear that’s Bill Ward drumming on ‘Heavy Liquid’, Phil Kaponis fucking kills this track. Tom rolls for days, the tone is so good, I suppose there’s some credit to go to psych’s most ubiquitous producer, Wayne Adams, on that front. I find it interesting that this is the longest track on the album and yet it’s the most sparse, there’s a haunting quality to it, five minutes of building before a death drop into some classic Casual Nun and then just as soon as it arrives it’s gone again. Awesome but, totally bizarre, there’s definitely a characteristic level of self awareness there.

The album comes to a close with a kind of send the fans home happy mentality, full of rancour and immediacy ‘A Light Plague’ and ‘Φυλαχτό’ finish things in a quintessentially psych mentality; the latter being sang in Vasilli’s native tongue, but easily standing out as the most arresting vocal performance of the album and probably my favourite track overall. It’s immensely full-on, ear-bleeding material. The isolated vocals closing out the album are fucking awesome, it’s cool that the band are playing up their predominantly Greek identity in this fucked-up post-Brexit time of asinine patriotism and unwarranted national pride oozing from the annexes of the most misinformed corners of society.

I think overall, Resort For Dead Desires marks a yearning to explore from Casual Nun as we’ve seen in the past couple of years from other bands in the scene, it allows them to experiment with their sets more as a live band and as a recording group offers them pathways to create a new sonic identity. It’s definitely a difficult third album but, I guess only time will tell on how new fans and old fans respond to it. For me, there’s an engrossing level of intrigue that will lend itself to many further listens and a more than ample level of riffage for me to blast tracks such as the climatic ‘Φυλαχτό’ on repeat. The album is available for pre-order now and is set to be released 17th March 2020 with both Hominid Sounds and Box Records.