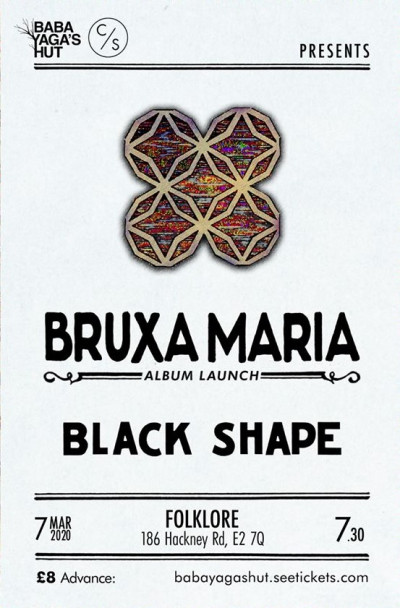 Having heard about this gig on Facebook a few days earlier and in the absence of anything better to do on a Saturday night, I decided to head up to this album-release show for The Maddening, the second full-length album by Bruxa Maria, a noise-punk four-piece with sludge metal tinges. I’d only heard a few songs by the band beforehand, notably those they’d contributed to a 2018 split EP with Casual Nun, and had really enjoyed what I’d heard; but what I saw at this show in a cramped, sweaty, 100-capacity Hoxton back room has made me want to listen to the band a whole lot more.

USA Nails lead guitarist Gareth JS Thomas opens things up with 25 minutes of moody, atmospheric cold wave. As his tall, lean frame looms imposingly over his synths, his music, combined with some excellently dark lighting that I can only assume is the result of Folklore’s lighting technicians really knowing their stuff, is reminiscent of John Carpenter chillers, and evokes feelings of being followed home late at night. The set is mainly instrumental but the few words Thomas whispers chillingly, into the microphone, certainly have a lasting effect.

Next up are Black Shape, a metal trio from Durham who play with a second guitarist tonight. And boy is he needed, because this is one of the loudest, thickest support band sets I’ve seen for quite some time. The band play a wonderfully noisy form of sludge metal with dense riffs that recall Melvins and Unsane. The growing crowd respond well, with a considerable portion of them (your humble correspondent included) head-banging along.

All of which serves as a very nice foretaste for tonight’s headline act. Bruxa Maria totally surpass both my own expectations and (as far as I can tell) those of many other attendees. The psychedelic territory into which the band’s nine-song set occasionally veers does nothing to mitigate the frenzied moshing engaged in by the front half-a-dozen or so rows of the crowd. I stand a fair way back from the pit, awestruck and marvelling at the sheer glory of the noise the band are making. Far from offsetting it, Robbie Judkin’s synths enhance and complement the sheer volume and intensity of frontwoman Gill Dread’s virtuoso guitar riffing.

After 40 minutes, the band bring their set to a close, and I leave the atmospheric confines of Folklore a hugely satisfied customer and a newfound fan of Bruxa Maria. This was the best gig I’ve seen so far this year, the heaviest show I’ve seen since Gnod played The Dome in November, and the best noise-punk gig I’ve been to since METZ excelled themselves at Studio 9294 in June. On tonight’s evidence, Bruxa Maria look set to become much bigger names within the UK’s growing psychedelic noise circuit, and The Maddening looks set to be one of 2020’s musical highlights for noise fanatics like myself.