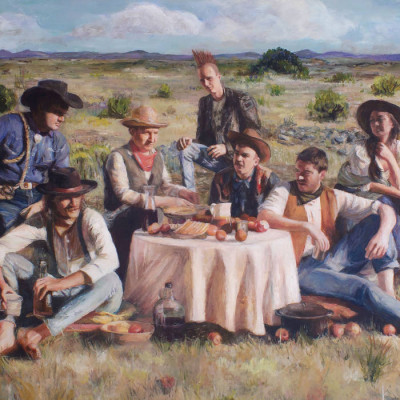 Flash! Boom! Ty Segall and Brian Chippendale appear in the clouds above! Wasted Shirt! Fungus II! Both artists are revered in their respective genres and hot off the back of some of their best material realised. The pair wanted to create a free-flowing loose collaboration of sorts that allowed them both to show off their creative flair, with Chippendale on vocals and drums and Segall on vocals and everything else. A project like this certainly comes with high expectations.

‘Double the Dream’ was the first single released from the album and sets the tone suitably. It opens with industrial metal undertones bleeding over hoarse screams. The guitars ripple fuzz throughout and coax the drums along nicely as they break away and down at times. There are vocal echoes that reverberate louder and louder. There are Butthole Surfer twangs. It’s hectic but enthralling.

‘All is Lost’ starts the album and is a psychotic head melting track. Chippendale goes manic on the drumming and Ty throws in some heavy fuzzed out bass. There’s a good dose of chanting and screaming which is foretelling of the album’s darker corners like ‘Fist is my Ward’ which growls a tale of distorted crackles and demonic whispers, spinning something aptly psychedelic and sinister.

‘Harsho’ sees Ty much more in his comfort zone with big guitar solos and lots of experimental off beat drumming from Chippendale. There’s vigour and depth in the vocals with warping narratives of decay and struggle “The people are oozing!” bellows Segall. ‘Four Strangers Enter the Cement at Dusk’ rounds off the album with a sludge infused seven-minute slumber. Towards the middle of the song neck joint guitar plucks rain down like arrows until we’re left with a ringing in our ears and a whirring in our brain.

Fungus II is frantic, euphoric, scary and undeniable drug fuelled. I kind of don’t understand it at times but that’s fine. I think it works if not just as a spectacle to witness the mutation of sound through collaboration of two powerful creative forces. I always enjoy it when Ty goes heavy, but this gives new depth to his ever-expanding palette. It falls in a little short at just over thirty minutes in duration, but it makes this ground up and more in density. There’s also some very colourful pre-release vinyl pressings out and with limited edition artwork in the form of risograph printed fluorescent zines by Chippendale you can’t really say no. Trip out on this at your own risk.