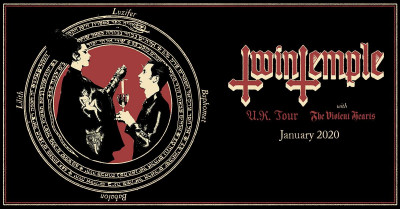 Just a few days ago, the Church of England declared that sex is for married heterosexual couples only – a move that secured their reputation as firmly capturing the tone of the zeitgeist out here in the West, in the early years of the Twenty-First Century. And you’ll of course have heard about the wave of abstinence that swept the country in the wake of this innovative advice, with the approximately eight or nine people who still do not meet this criteria laying down their prophylactics out of respect and charging straight to their local churches.

So it’s strange that Twin Temple – an LA band who promote the vile, egregious values of equality, justice, feminism, and body positivity, through their shockingly extreme “Satanic Doo-Wop” sound – should sell out a show at the Jazz Café in London, an obscure city renowned for its conservativism and traditional values. So I’m clearly nervous about attending with my long-term partner to whom I am not – deep breath – married in holy matrimony. Leaving my jacket, dripping with poorly-concealed sarcasm in the cloak room, we emerge into the Café to the driving strains of Birmingham post-punkers The Violent Hearts. Peering up to the nicely tall Café stage, I can see three sharply dressed men – who could all appear in the window of your local All Saints branch – trying not to appear too pleased at landing this support slot. While I’ll admit that dark wave and post-punk have never been my favourite sub-genres, I’m certainly partial to them. But something’s not really working for me here, I have to admit. There is energy, some catchy jangly intros, some rolling drums and punk attitude – but, if I close my eyes, we’re more in Noughties indie-rock territory. Nothing wrong with that in principle, but it’s not quite the dark, bleakness I was hoping for. Listening to their latest single ‘Porcelain World/Hex On Me’ on Bandcamp after the show, however, with pessimistic lyrics and occult references, I can see how they wound up here. Still, the crowd tonight – Goths, metallers, rockabilly types, one guy seemingly dressed as Baron Samedi (his spirit is called upon in Twin Temple’s ‘I Know How to Hex You’, after all) – certainly seem to be enjoying it, and are queuing up afterwards to buy their 7”.

As a pentagram-covered altar, candles, chalices, a giant female blood-drenched Baphomet banner, a saxophone, and a hammond organ emerge from the wings, it’s safe to assume that tonight’s headliners are up next. If you’ve not seen Twin Temple then you really are missing out. (They sold out The Lexington, too, last time they were in Town.) At the core of the band are frontwoman Alexandra James and guitarist Zachary James, a rather beautiful pair of LaVey-inspired Satanists with a love for early rock ‘n’ roll, classic (i.e. from the 60s and 70s) R&B, soul, and all things kitsch, camp, and theatrically devilish. Every show is a ritual, developed, as they explain in interview, from their domestic practice. In they parade to the sound of gloomy Hammond, daubing the crowd with blood from a chalice, brandishing ornate swords, ringing them bells, and reading from a syncretic Satanic sermon of their own devising (the album intro ‘In Lvx’). “De nostris Satanis! In the name of glorious Satan and glorious Lilith!”

All this dark melodrama is then brilliantly undercut by the jaunty, upbeat soul of ‘The Devil (Didn’t Make Me Do It)’, to which everyone already knows the words. Hearing this kind of music (especially in Camden), it’s difficult not to think of the much-missed Amy Winehouse, and Alexandra certainly has both the gloriously rich and sassy voice and the stage persona to justify such a comparison. In short, she’s completely brilliant, easily and immediately dispelling any concerns you might have about the admittedly high gimmick factor of this whole set-up. Announcing that “This one goes out to my true love”, Alexandra has to politely correct an enthusiastic shouter –“Satan!” – about her particular proclivities for demonic entities (“Well, you can call me Lucy”), as they launch into “Lucifer, My Love”, something like an infernal version of The Skyliners’ classic ‘Since I Don’t Have You’. While Alexandra certainly dominates the stage – sweeping to and fro constantly, grasping eager hands, crooning up-close and personal – the rest of the band aren’t left out, as she name-checks their solo-spots (“Hey Eddie! Come on…”, “Give it up for my man Zach here!”). There are sing-alongs, crowd-participation, silliness, serious messages (“Fuck racism! Fuck sexism” and, because we’re in London, “ Fuck Brexit!”), and a tremendous amount of sheer fun.

Running through their debut in full tonight, it’s clear how packed with great tracks it really is: who could resist ‘Sex Magick’, ‘Satan’s a Woman’ or ‘I am a Witch’? All of which live up to the promise of their auspicious titles. One inevitable moment of a Twin Temple set, somewhat extraneous to the music but obviously essential to the theatricality and the message, is the section known as the “Ritual of Babylon”. If the blood-splashing ceremony at the start wasn’t enough, the band pull out an audience member, blindfold them and bind their hands in a display of trust (accompanied by suitably melodramatic organ swells and drum flurries). The twist tonight, however, is that this individual is not an eager neophyte from the front row, but a tall, long-haired chap from the wings – none other than former Cathedral frontman and Rise Above Records label boss, Lee Dorrian! So, they’re basically sacrificing their boss on-stage. (Actually, I’m curious about, in this minority-doom crowd, how many people know who he is. But still he gets his cheer. . .) Except that this does not represent the taking of life, but (apparently) symbolic of something more progressive. Repeat after me: “You are free from ignorance!”. “I am free from ignorance. . .” While I’m sure that some of those at the front are a little disappointed at losing their chance to take the stage, Dorrian’s responses certainly have the gravitas and the intonation of an occult professional. As with all elements of the set, it’s performed with enough gusto and practice to be entertaining without being Spinal Tap. If this all starts to drag just a little toward the end, the band wisely crack on into the sax-heavy, jaunty number ‘Femme Fatale’, which recommences the dancing. Twin Temple close their fabulous set with my personal favourite, ‘I’m Wicked’, a sultry hymn to sexual emancipation and female agency, continuing to jam for several minutes while we queue to have upside-down crosses daubed upon our brows by the dapper, Satanic power-couple.

Twin Temple are clearly serious about their beliefs, and their love of old-time golden oldies; and if nothing else, all this might remind people that it’s still cool to listen to this kind of stuff – you know the origins of rock music and all that. What they lack in originality, Twin Temple transcend magnificently in pure quality, enthusiasm and an irresistible sense of joyous magnetism, worthy of the Great Horned One herself.