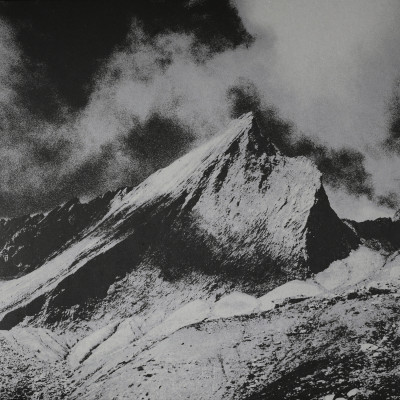 From two fiercely unique and dedicatedly purposeful albums Dede Kondre and Dor, and a couple of splits, Turia emerge again from the Haeresis Noviomagi collective of innovative, far-reaching black metal projects. The new record, Degen van Licht, is a further installment of ambitiously exploratory, tightly controlled, and above all, furiously exciting music.

The band begin with a first track of whistling, groaning amped guitar squeal, setting up an almost impressionistic platform of abrasive but deliberately delivered scraping noise for around a minute and a half. ‘Merode’ soon snarls into riffs scorched by vocalist O’s amazing and highly distinctive hoarse roaring, all while snare shuffles fill the sound so you’d be surprised it’s a three-piece, let alone just guitar, drums and vocals. The descending riff is so full of sound and so relentlessly delivered that its simplicity becomes a powerful force. Faster passages ratchet things up, and then we drift onto emptier plains of ominous slow waiting, again with a teetering skree of guitar noise jangling the nerves over top. It’s testament to the band’s skill that in other circumstances this might feel like an interlude, a switching off, but Turia keep things intently focused even when they’re exploring more spacious territory. It’s this force of attention that allows a broad range of experimentation throughout the record to still crucially feel the intensity of spitting, raging black metal: even in trancelike repetition, echoey drones, tinkling bells over quieter more reflective parts, and even some hunting-horn style trumpet blasts. Which, in turn, lead back to the hard-hitting riffs and the guttural yelling, together providing a surging, wave-frothing energy of propulsion.

The deliberate, echoey guitar line played to a lonely insect kreek-kreek at the start of ‘Met Sterven Beboet’ for example, is absorbing already, so the effect of the sometimes stern, sometimes skidding loud parts are doubled. And the vocals. Sombre but stinging, raw and also controlled, ephemeral yet physically guttural, aggressive while haunting, O is for me the most striking black metal singer around, and if you get the chance to see the band live then her understated but unusual stage presence is also seriously intense. I can see why they picked ‘Degen van Licht’ as the promo track to trail before full release, as it’s… if not the strongest track, then a microcosm, since the strength of the album is its ability to traverse all kinds of landscapes while maintaining both gripping energy and a sonic unity. The title track riff is an avalanche, roaring down mountainsides endlessly, interspersed with breaks for lungfuls of icy air, punctuated by those wailing trumpet calls from the other side of the valley. Again the vocals are monstrous, coming at you on all fours in the snow. Later, at the end of the next track ‘Storm’, they’re supported by an almost-choral male vocal chant, giving a glimpse into a sort of cathedral of ice and boulders feel. And like that kind of landscape, made of austere greys and hard surfaces, despite a certain monotony in palette, there’s always more to discover and explore, and the album reveals depths (and heights) with further listens.

There’s another ambient-ish sort of track, ‘II’, a kind of treated piano blanketed with pine-leaf ambience, at once soft and prickly. This might make you think it’s the album closer, as is customary with less imaginative bands, but there’s another raging track afterwards- just like the band to simultaneously nail and exceed the conventions of the form. This is ‘Ossifrage’, which starts with a rattle of drums, and an odd sort of high guitar sound that reminds me of a really annoying whistle I had when I was a kid, that has a long up-and-down clattering wheeeeee noise. It’s the only note on the album that to me seems out of place, unfitting with their grainy gritty sound elsewhere. But maybe that’s just weird childhood associations and I should keep quiet… Anyway, a rumbling thump of a riff comes along to swat aside any such trivial details, and this track is the true epic of the album at more than 12 minutes. Along the way of course there are rigorous climbs and stark plateaus, until finally at the peak, the glittering ice causes us to evaporate into the thin air of this high-altitude piece.