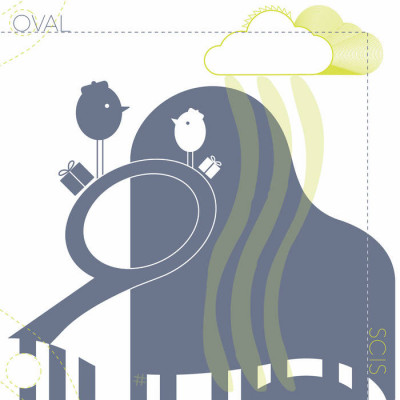 When they started out in the Nineties, Oval was hailed as one of the innovators in electronica and progenitors of glitch. While most people were imagining artificial intelligence as ‘live’ robots, Markus Popp was already implementing software intuition into Oval’s music. If you ever wanted to find a common trait in Oval’s twenty or so releases, one word would dominate – innovation. That trait remains the same on Oval’s latest – Scis.

In a way, Popp here decided to turn the tables around a bit. While most of the time he tried to focus on the role of the electronic element, software, in his music, this time he focuses on the ‘human element’. What that would loosely mean is that he decided to inject acoustic instruments into play. All this is even reflected in the composition titles – it all sounds human and electronic at the same time – ‘Twirror’ (Twitter as a mirror?), ‘Robussy’ (Debussy as a robot?). It goes on.

Sure, the electronica software can do its thing, but then, what would it do without human imagination? It is great that Popp asks this question, not only of himself but also of his listeners. At no point on the album does Popp go back or repeat himself. Still, all his previous ideas seem to be present with new ones woven in. Just take a listen to the intricate combination of electronics and vibraphone on ‘Impecco’ (what form of intermezzo?), for example.

In the end, bot Popp and his machines come on top.  What we get in these ten new compositions on Scis is yet another set of creative human/machine interaction that pushes the boundaries of electronica further on. What next?