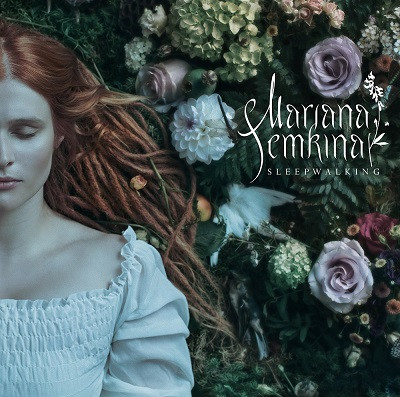 For ten years, iamthemorning has been challenging listeners with their beautiful storytelling textures on subject matters including the stories of lost loved ones, the aftermath of their character’s deaths, and the final years of someone’s life as if it becomes a one person play that is sung through from start to finish. Marjana Semkina and Gleb Kolyadin work well together as a team with their arranging and composition.

Gleb released his sole self-titled debut album back in 2018. And now Marjana herself is stepping into the ball park with the release of her solo debut entitled, Sleepwalking. Released on the Kscope label, it gives Semkina a chance to blossom out of her shell by spreading her wings to fly. Not only that, she’s made some guest appearances on different albums from bands and artists such as; Subsignal, Jordan Rudess, and Knifeworld’s Charlie Cawood on his second solo album, Blurring into Motion.

Her album is being released with an alternate spelling – Mariana Semkina. The reason why she wanted to do a solo album is that she wanted to translate how the emotions are heartfelt and raw with no sweetness and filters, but being very innovative with a creative mind that makes it heartfelt, strong, emotional, and very powerful.

And to be allowed to have drummer Craig Blundell (Steven Wilson, Steve Hackett), bassist Nick Beggs, keyboardist Jordan Rudess, the St. Petersburg Orchestra 1703, and engineer Vlad Avy, it goes to show you that they are watching her back and finding out which path of the sidewalk she wants them to go into. The subject matters on this album deal with the struggle to move forward, the loss of innocence, the fight to be free, and domestic abuse. And for Mariana, she puts everything on the kitchen table to show how much work and hardship she has brought to Sleepwalking.

From the sounds of the guitars opening up on ‘Turn Back Time’, they bring the doors wide open as the sound the string section floats in the air for Mariana to sing with this epic-like atmosphere with some post-symphonic harmonies that gives us a chance to go backwards in time by standing up for yourself and fighting back. ‘Dark Matter’ which opens the album, is set into this quiet forest filled with these acoustic arrangements.

Mariana’s characterizations fill the night sky with loneliness and being scared. And understanding that there is no sign of help in the middle of the woods with no turning back. ‘Lost at Sea’ has the acid-folk sounds that have come to life as she channels Mellow Candle’s Clodagh Simonds, Tudor Lodge, Vashti Bunyan, and into the Garden of Jane Delawney-era of Trees. It’s almost like being lost in the middle of the Atlantic Ocean waiting for a sign to be away from the dangers that are underneath the salty waters.

‘Am I Rising’ is an uplifting beauty that would have given Semkina herself a chance to write a ballet waltz by giving the dancers embarking on their spiritual journey to find their inner selves. ‘Everything Burns’ which is one of her compositions, will one day be a live favorite for iamthemorning. It is a song that refuses to die.

From the sound of a record playing with a string section, Mariana delves her toes into the water of a haunting jazz ballad as the subject of a survivor who went through domestic abuse that is finally free from the hard times they went through. She really hits you hard with this song as being free from the pain and suffering and seeing all that the characterization of the person went through, is burning everything to the ground as they move forward into their lives.

And seeing where the future will bring to them. However, it will haunt them for many years to come. Sleepwalking is perhaps one of the finest albums to come out for 2020. And for Mariana Semkina, she hovers up to the skies even more. And she has done it perfectly. This was my third or fourth time listening to her new album. For Semkina herself, she deserves a big giant pat on the back for a job well done for her solo debut.