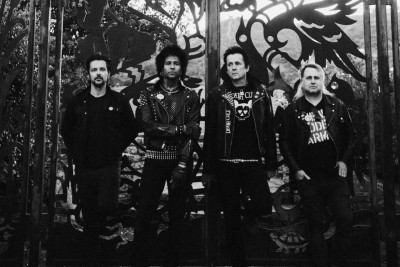 We spent more time on writing and experimenting for the new record. We started focusing on melody more than on the last release. We had more of an overall idea and vision for the this record.

LA dark punk band The Wraith have only been around a short while, but have definitely made an impact with the material they’ve released so far. The band have just released their new album Gloom Ballet, the follow up to 2017’s Shadow Flag EP and its dark and macabre themes and sounds pay tribute to many great bands while retaining a vibe totally of their own. Gavin Brown had a chat with the band’s guitarist Katz Alvis to hear all about Gloom Ballet and its deathrock sound as well how how the band came to be, having punk icon Rikk Agnew as a fan, their LA hometown, covering the Misfits, signing to Southern Lord Records, some of their highlights of the year and favourite albums in a highly entertaining chat.

E&D: Your new album Gloom Ballet is out shortly, how did the creation and recording of the album go?

Katz: We spent about two years writing and working on Gloom Ballet. The album was written in an old condemned former sweatshop in downtown LA. After two years we went into Pusifer guitarist Mat Mitchell and Smashing Pumpkins guitarist James Iha’s recording studio in North Hollywood. We were in the studio for about 6 weeks tracking 12 songs with Mat engineering and producing. Mat has a lot of vintage 80’s gear so that was one of the reasons we wanted to work with him.

E&D: How was it working with Mat Mitchell and what did he bring to the album and its sound?

Katz: Mat’s great to work with. He’s very laid back. He was familiar with our influences and understood the tones, sounds and vibe we wanted for the record. We got to use all his vintage gear. A Juno-60 synth, Fairlight synth cmi owned by Michael Jackson, Roland 120 guitar amp, a console owned by Devo. Mat’s very knowledgeable of the equipment so he was able to dial in the tone we wanted.

Katz: It was a pretty relaxed vibe. We spent 3 days tracking drums then a few weeks working on guitars another week on vocals. It’s a really nice studio so it was easy to feel at home and stay focused.

E&D: Does the albums sound have a lot in common with your debut EP Shadow Flag?

Katz: I actually recorded and played all the instruments on Shadow Flag myself so working with Mat and recording with a full band was a big step up. Mat’s production on Gloom Ballet is far superior to Shadow Flag. On Gloom the songs are more focused. We definitely spent more time with songwriting on Gloom Ballet than Shadow Flag.

E&D: How do you think you evolved as a band since that release?

Katz: We spent more time on writing and experimenting for the new record. We started focusing on melody more than on the last release. We had more of an overall idea and vision for the this record.

E&D: You have just done a video for ‘Wing of Night’, can you tell us about the video?

Katz: We shot a video for the track ‘Wing of Night’. We shot it over the course of two days at an old haunted theater house in North Hollywood. Not far actually from Mat’s studio. His fiancé Alisa directed, shot and edit it. We had psychic Tiffany Hoffmann come down and perform a séance and we filmed it. During the séance Tiffany had us sit in a circle around candles, hold hands, and close our eyes. When I shut my eyes I could see a blinding white light shining on me. It was so bright that I actually flinched. I thought someone turned one of the production lights on but when I opened my eyes we were still sitting in the dark. After the séance I mentioned what happened to me to Tiffany. Her eyes got real big and she said it was a spirit trying to come through me.

E&D: How has the music of The Wraith been received so far?

Katz: The response has been amazing for the new record. There’s been a ton of positive reviews. The write-ups have been really great. We’re getting a lot people telling us it’s their favorite record of the year, which is awesome.

E&D: How did The Wraith get together in the first place?

Katz: I was writing and recording songs. Not really knowing what I was going to do with them. I was writing stuff with a lot of 80’s influence. Killing Joke, The Chameleons, Death Cult, and some new wave stuff also was an influence. I didn’t think I would find people that would be into that type of sound. I was at a show and I ran into Davey. I was a fan of his last band. We stated talking and clicked on the bands we are into. I had him put vocals on one of the songs and we put it on YouTube. It started spreading really fast. We started getting contacted by record labels. We started looking for other band members at that point.

E&D: Who are the biggest influences on The Wraith’s sound and yourself as a musician?

E&D: Rikk Agnew from Christian Death, Adolescents, 45 Grave and Social Distortion recently sported a Wraith t-shirt on stage, how much if a thrill was that for you?

Katz: Rikk is an awesome guy. We were really excited to see that. We love all his bands. His solo records are awesome also. We always have fun when we open for him.

E&D: How much does the history and folklore of your Los Angeles hometown have in effect on your music?

Katz: Actually we’re big fans of LA history. There’s a lot of crazy stuff that’s happened here. The city has so much bazaar history. I’m sure it seeps into our music one way or another. It seems like everywhere is haunted here. We’re always looking for weird and historic places to shoot videos at. There are plenty of them in LA.

E&D: You have covered the Misfits song ‘I Turned Into A Martian’ in the past, what other Misfits song would you love to tackle in the future and are they a big influence on The Wraith?

Katz: Yes we covered Martian for a comp. I’d say if we did another song we’d do maybe one of the faster songs off Earth AD. Yeah we love the Misfits we all grew up listening to them. We’re also into Samhain and Danzig.

E&D: If you could cover any other songs as well, which ones would you choose?

Katz: We’ve covered ‘What Love Is’ by the Dead Boys and ‘Warriors’ by Blitz. We have played around with ‘Don’t Change’ by INXS and a Damned song also. I’d love to cover songs by UK Subs, GBH, Late 80s era Ramones, The Alarm, Generation X, Mission UK. There’s a ton.

E&D: What was your first gig as a band like?

Katz: It was absolutely horrible. The venue was a dirty little bar in Long Beach that wasn’t set up for live bands. I think half the place was under age. I’ve seen people get stabbed out front of the venue before. The PA was so bad that every time our singer sang it would just feedback extremely loud. I had to kick the speaker over at one point. My ears hurt for 3 days after. The band definitely wasn’t as tight then also. We sounded awful. We had a lot of members coming and going at that point.

E&D: What are your touring plans once Gloom Ballet is released and into the new year?

Katz: Right now we’re set to do a west coast in March. It’s still being put together so there’s not a lot of info. We plan to tour a lot in 2020 though. We love getting out of LA.

E&D: How did your recent show at the LA Dark Fest go?

Katz: LA Dark Fest was amazing. It was a lot of fun. I believe it was over sold. It was packed. All the bands were great. A lot of people flew into LA just for it. Everyone seemed to have a good time and there was a good vibe. All the bands were awesome.

Katz: I’d say the best gig this year was definitely LA Dark Fest. The best gig I’ve ever seen would be The Ramones, The Chameleons, or Billy Idol with Steve Jones on guitar. That’s a tough one. I’ve been going to shows since the late 80’s.

E&D: How is life on your label Southern Lord?

Katz: Southern Lord is great. The owner Greg is awesome and really knows what he’s doing and how to run a label. He puts a lot of promotion into the releases. A lot of labels put out records and just do a social media post to promote them. We worked with their in-house graphic designer also and the packaging turned out fantastic.

E&D: How did you come to sign to Southern Lord?

Katz: We had an attorney looking at some contracts and some offers from other labels. He wanted to shop the record around a bit to other labels. He mentioned us to Southern Lord and Greg knew who we were and had already bought our record actually. We met with him and just talked and geeked out about bands and music. He came off as a fan more than a business guy, which was very refreshing. A lot of the other labels the first thing they asked us was “Do you have an attorney?” Plus Southern has a great roster of bands that we wanted to be a part of.

E&D: What have been your favourite albums this year?

Katz: I’d have to say First Flesh by a band from Venture CA called Detoxi. It’s just a cool dark but melodic deathrock record. The production is awesome. The bass tone is perfect. The guitars are loud. Another great record is the Uncrossed 7 inch by a band called Korine. It’s total 80’s synth pop. It’s so good. They really nail the production.

E&D: What are your favourite albums of all time and why?

Katz: Ramones – Brain Drain. Late 80’s Ramones is my favorite era for them. They got darker and heavier. They also started using a lot of synths on they albums. New Model Army – Ghost of Cain. It’s just a solid record. The production and songwriting is awesome. TSOL – Revenge. This era of TSOL is my favorite. It’s like dark goth punk with a bit of 80’s LA metal. The Chameleons – Script of The Bridge. Great simple songwriting. The production on this is insane. Awesome 80’s guitar tones. It’s a perfect record.

E&D: What have been the most memorable moments of your time in The Wraith so far?

Katz: Signing to Southern Lord. Playing LA Dark Fest. Opening for Zakk Wylde at the Fonda. Opening for The Chameleons. Seeing our finished record at Amoeba Records in Hollywood.