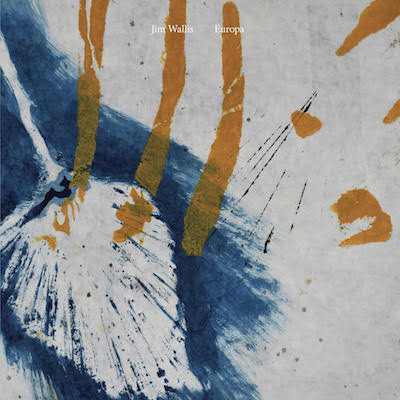 Sidling away from the atmospheric dream pop recordings of Still Corners and the experimental psych of Modern Nature, multi-instrumentalist Jim Wallis has taken to the world of modern classical with a treatise on life, death, and that whole wobbly stretch of existence that straddles the two.

Europa is formed of pieces designed to accompany (and share the name of) a film that tells the true tale of an asylum seeker who takes his own life. Adding a layer of increased intensity to proceedings is the use throughout of Wallis’s deceased grandmother’s cello. Wielding this instrument to score a film about a person reaching out from beyond the grave to the important people from their life really requires no parallels to be drawn.

But drawn they will likely be as the music itself is littered with sounds that seem to bridge the plane that separates life and death. On the fifth track, ‘Europa, Pt. 2’, icy notes travel back and forth across time as if connecting two disparate worlds. This feels like the chilly billow of a flimsy curtain in a cold, white room. We’re trapped between the uninviting and sinister outside roaring in and a sense of shivery unease flooding the room, making it feel utterly uninhabitable. Notes draw out. Extending the tension and uncertainty, segueing from one track into the next, blurring the boundaries, obscuring the borders.

There is a sense of inconsistency throughout. Not in the quality of the music, which remains moving, inventive, and potent, but in terms of the uncanny and unreliable nature of the sounds, often appearing as one thing but easily mistaken for another. The track ‘Open Door’ features frantic and shrill noises that are distant enough to be mistaken for percussion or sirens. It is the distorted background rumpus of an unfamiliar city. Something that residents end up needing in order to sleep. The silence can become deafening. Bowed strings drone through this like a life marking out its path through history. As with everything, this eventually fades.

Similarly, the manner in which the struck chords resound on ‘Return Train’ brings to mind the chugging of train wheels. And ‘London Walk’ appears to be more of a glide than a walk. As if the sounds are lifting us by invisible strings until tips of toes trace desire lines in the dust. Unseen, we float serenely along trajectories of our own making. Like Enter The Void but blue-lit and directed by the tender hand of Terrence Malick. We rise steadily up through the cobbled streets, past white-washed walls daubed with graffiti, and into grumpy clouds guarding the welcoming ether.

The centrepiece (and lead single) – ‘Audition’ – is full of a kind of haunting hope. A Basinski-esque loop that persists beautifully amidst reversed sounds that grab out of a gently surging haze. A rising hum that comfortably warms. A spurt of melancholy-tinged joy slowed down to the rate of shifting tectonic plates.

And through all of this is a recurrent motif, repeated on each of the three iterations of the title track, that seeks acknowledgement. It is as if it is piping its message out into the unknown, eagerly awaiting the response to its call. But its cry is always mournful, knowing that no reply will ever come. This record is not merely the epitaph for the lost life of the person at the centre of the film, nor the hundreds (if not thousands) of people who find themselves forced into similar situations but also an elegy for unity throughout the world. The sorrowful sigh of fracturing relationships, retreating empathy, and dissolving hope. If only we could rebuild these crumbling bridges.