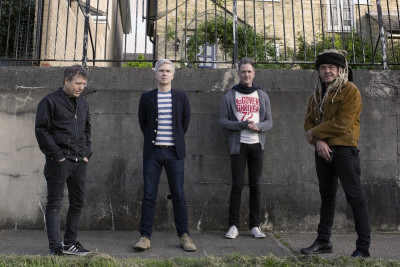 The songs were composed and written before getting to Rockfield, but there was still a lot of work to do. I had a short conversation with the producer John Leckie once and he said that he thinks a band should come in 80% prepared. Enough to make a record, but not so much that there isn’t room for surprises!

On February 7th, New-York-based Nada Surf unleashed their heartwarming and uplifting new album titled Never Not Together. From the album title to the lyrics, the band captures the inner workings of life and how we live it. It’s the band’s ninth studio album and their first in almost four years. It was recorded at Rockfield Studios in Monmouthshire, Wales.

The band is currently on a world tour and Matthew Caws (singer, songwriter and guitarist) took time out to do an interview with us…

E&D: Can you tell us how each of you got into music?

MC: My aunt used to play the guitar and sing for us when my sister and I were kids. Years later she bought me my first guitar. Our parents left us alone a lot and we would listen to the radio all the time. We’d constantly move the dial around and we got to know all the new york stations. My sister was older and started working at the radio station when she went away to college. I got into classic rock alone, but she taught me about new wave and punk and everything else. My parents listened to classical music and I still have a big appreciation for that too.

E&D: How did Nada Surf come together and for those who don’t know, can you tell us about the band name?

MC: Daniel and I were in the same school since we were six years old, but we finally ended up in the same class when we were fifteen. A new kid called Stephane put a band together with Daniel and they asked me to join because I was one of the only other kids who seemed interested in music. That band was called the cost of living. We broke up a few years later and Daniel and I formed a band called because because because with a great songwriter called Robert Randall and a great drummer called Alex Gomez (now sadly deceased). That band also broke up after a few years. That band had been pretty ambitious and Daniel and I decided to form our next band for fun only. Ironically, that’s when things started happening. At first, Daniel didn’t want us to have a name, so he suggested nada (he’s spanish), for “nothing.” turned out that name was taken, so to help him keep it, I added a word to it because in my mind nada surf sounded like floating in your imagination or something, dreaming.

E&D: Your new LP Never Not Together was recorded at Rockfield Studios in Wales. Can you tell us a bit about the recording process? Did you have the tracks already composed, lyrics written?

MC: Our usual process is that I write songs and bring them to the band and we figure out how to play them and what they should sound like together. Sometimes I bring songs fully written but sometimes they’re just fragments. The important part is how we arrange them. That’s where the band’s identity lives. Because my wife and I have a young toddler, the guys were kind enough to come over here to Cambridge a few times to practice. The songs were composed and written before getting to Rockfield, but there was still a lot of work to do. I had a short conversation with the producer John Leckie once and he said that he thinks a band should come in 80% prepared. Enough to make a record, but not so much that there isn’t room for surprises!

E&D: I’ve read that the new album is a “salute to communal unity”. Can you tell us a little more about that?

MC: That’s an interpretation but it’s a good one! The album definitely has a positive undercurrent. It may be because I’m at a good place in my life and I have the bandwidth to look at songs objectively and think: “could this help someone?” or “is this useful.” We have felt so much more social fracturing lately, especially in the United States since trump’s election. The endless cable news cycle and the ease with which we can argue on social media definitely play a part too. I think this has led me to talk about tolerance more in songs, to talk about managing one’s own negative feelings, to talk about all the good material that is out there to build a future with.

E&D: What would the band cite as their biggest musical influences both personally and as a band?

MC: Early to mi-period who, the Velvet Underground, early R.E.M., early Echo and the Bunnymen, Neil Young, The Kinks, Teenage Fanclub, The Clash, Luna, too many to name

E&D: You have a huge tour coming up that starts in Europe, goes to North America and ends in France. What does the band do to “gear” up for such a huge tour (pun intended!)? Is there a stop on the tour that you’ve never visited before?

MC: I think we try and dive into home life as much as we can to charge our batteries because being away from family is the hardest part. The rest is pretty easy really. We’ve been everywhere we’re playing in Europe. However we’ve never played in Fairfield, Connecticut or Jersey City, New Jersey, but those are places so near to where we grew up that we feel like we know them. Aha! Maquoketa, Iowa! never been! looking forward to it!

E&D: What’s the best and worst thing about touring?

MC: Sorry to be so obvious but the concerts themselves and being away from home.

E&D: Lastly, being from New York City, is there a music shop(s) that any music aficionado should check out?

MC: Main Drag in Brooklyn is a fantastic music shop. If you’re into guitars, also check out 30th Street Guitars. If you’re into the best acoustic guitars you can find anywhere, check out Retrofret in Brooklyn. Expensive, but you may find the instrument you’ll play for the rest of your life.

Never Not Together is out now through Barsuk / City Slang; stream the whole album here.

Go here for all tour information.