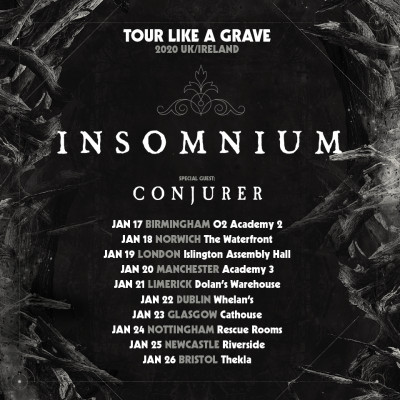 Having released one of the most highly rated metal records of the previous year, Heart Like A Grave, Finnish four-piece Insomnium brought their dark and haunting melodic death metal to UK shores. Known for the melancholia that they weave into their lyrics and the way that they then incorporate this into their sound, they were really an ideal choice to see on a cold winter’s night like this. Moreover, the fact that October’s Heart Like A Grave had been received so well by fans and critics alike, and had also followed up two other well-loved albums, meant Insomnium were  coming to the UK as on top of their game as it is possible to be. After having plugged away in the relative obscurity of the Scandinavian death metal scene, the Finns had managed to break through to become one of the most respected bands of their genre over the last ten years, and were aiming to go into the new decade with more of the same.

A band who have been touted by many as on the cusp of something equally special are Conjurer. Hailing from Rugby and playing an astonishingly brutal blend of doom, sludge and progressive metal, Conjurer have been firm favourites on the UK underground metal scene for a few years now, and have done their cause no harm whatsoever with the release of their acclaimed debut album Mire in 2018 and Curse These Metal Hands (a collaboration with label-mates Pijn) in 2019. Being the only support act of the evening and playing a larger venue than they have previously been used to, they had yet another chance to make an impression – a chance they fully took. Choosing not to engage with the crowd once throughout their 45-minute set, Conjurer preferred to let their music do the talking (or, more accurately, the screaming). Both vocalists, Dan Nightingale and Brady Deeprose, were in fine form, filling the venue with their bold guttural sounds. Indeed, Nightingale was even brave enough to abandon his microphone for one segment and rely on just his vocal cords to scream at the crowd.

Meanwhile bassist Conor Marshall took centre stage windmilling like crazy through the show, and drummer Jan Krause held everything together with some great technical stick work. Conjurer are so in sync with each other in the live setting that they are able to create a pervasive sound of the utmost heaviness, and it was great to see them make it work so well even in a less enclosed setting than they are used to. Their sound is not just ferocity for its own sake however, as their music contains so many interesting switches of tempo and tone throughout, it is clear that each song is carefully crafted as well as expertly performed. The crowd who had arrived early to see Conjurer were duly rewarded and could be left in no doubt why this is a band that so many are talking about.

Fortunately for Insomnium, they are not the types to be easily upstaged by such a fine opening performance, and took to the stage with the easy confidence that a band of their stature and experience allow for. Kicking off the set with ‘Valediction’, the catchy first single from Heart Like A Grave, the crowd very quickly got into the groove of Insomnium’s music for the evening. Where Conjurer brought raw aggression, Insomnium are a more melodic affair, though still with the thunderously harsh vocals of lead singer and bassist Niilo Sevänen permeating the rest of the band’s music. What was really intriguing to see was how well Insomnium managed to construct this sound and translate it into a live setting, where it is not uncommon for intricacies and subtleties to get drowned out by the noise. The sound was mixed to absolute perfection with no exception throughout the entire hour and a half, which particularly benefited their most recent songs – ‘Neverlast’ and a song which is clearly already a firm fan-favourite ‘Pale Morning Star’, where the mellow acoustic sounds blended superbly with the harshness of the band’s vocals and rhythm section.

Insomnium even managed to create their superb depth of sound as a four-piece, rather than the five members who recorded Heart Like A Grave. This is because guitarist Ville Friman has had to take a backseat on the touring front in recent years due to his commitments as an ecology lecturer at York University. However, former touring and now permanent guitarist, Jani Liimatainen, more than capably stepped in, and added some wonderful clean vocals to supplement Sevänen’s growls on tracks such as ‘And Bells They Toll’. Meanwhile, Markus Vanhala was on lead guitar duties and performed them incredibly well, aided again by the incredible sound which allowed him to get a gorgeous tone for every riff and solo. All of this was supported by Markus Hirvonen behind the drumkit, who provided much of the power that prevented Insomnium’s music from becoming too much like background music. While Insomnium did not adopt quite the same standoffish approach to their support band, they are also not ones to rely on spectacle, preferring instead to keep things simple and focus on their sound.

The result was that the incredible atmosphere and soundscapes that Insomnium are able to create on record are translated into a live show with real expertise. The decision to eschew some of their more popular songs for longer layered tracks proved to be a good one in this context, although they still made time for some classics in the form of ‘Ephemeral’ and ‘While We Sleep’ towards the end of their set. When these catchier songs came in, they were also executed tremendously well and got terrific reactions from the crowd. Finishing with their latest album’s title track, they were able to put the finishing touches to a very fine evening of music. Through a combination of excellent musicianship and professionalism, Insomnium gave us a chance to fully experience their signature sound with a real precision performance. They were able to both showcase their music with a high quality musical display, and forge a real connection with the crowd so that they could experience the music on its emotional level, too. It is no surprise then that the Finns are considered to be at the very forefront of their genre right now, and there will doubtless be more incredible evenings like this for fans to enjoy in future. 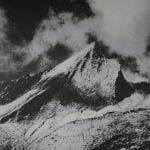 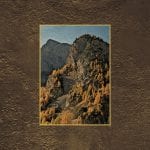 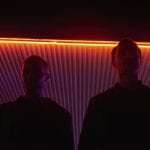