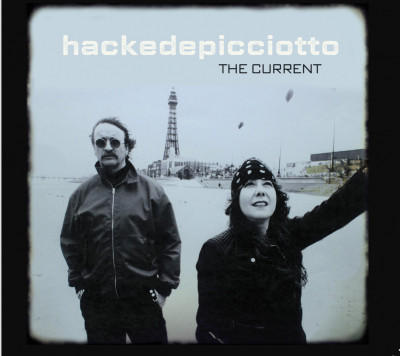 Blending rusted industrial ambience, doom folk and post rock with the odd dash of spaghetti western soundtrack THE CURRENT is an unusual and intriguing record. hackedepicciotto describe their sound as “cinematic drone” which is reasonable. It’s certainly cinematic and there are drones in it, but this album features more rhythmic elements than before and quite a lot else besides.

Danielle de Picciotto and Alexander Hacke have been working together for over two decades. Hacke is the most rock ‘n’ roll looking member of Einsturzende Neubauten. This is partly because he plays a low slung bass rather than any of their self built instruments but also that he rocks a long hair and ‘tache combo with a subtle but undeniable Derek Smalls vibe. Danielle de Picciotto was a co-founder of Berlin’s legendary Love Parade and member of several bands including Crime & The City Solution and Space Cowboys. Married since 2006 the couple became nomadic in 2010 to try and shake loose the deadening onset of gentrification and seek out new ways of working. Curiously, this has led to them making an album in England’s archetypal tatty seaside town.

The cover art of THE CURRENT is essentially a selfie of the couple, looking a little windswept, out for a walk on Blackpool beach. The famous tower behind them, the beach is deserted, off season. Europeans on holiday in Lancashire by mistake. By cosmic coincidence (because who could have accurately predicted it?) the album is released on ‘Brexit day’. THE CURRENT isn’t exactly a Brexit record, although it is haunted by it. The scope of their concerns is far wider – the ongoing fallout of neoliberal capitalism of which Brexit is merely a very English spasm. They chose Blackpool as somewhere left behind by globalisation, to try and understand and channel how that felt. “Travelling Berlin artists, comin’ over ‘ere… making cultural capital out of our magnificent post industrial decline? Bloody cheek of it!”

The first track ‘Defiance’ opens on tolling bells and the pink noise of crowds before de Picciotto starts solemnly intoning “All men are created equal” with a steely resolve. You’d like to think such a self evident societal baseline shouldn’t require such defiant expression and yet, here we are. Still, the strident tone is a slight misdirection, we aren’t really in for an album’s worth of didactic brow beating. Elsewhere the lyrical content is more poetic and impressionistic and most of the record is instrumental. Having drawn this bitter line in the sand ‘Onwards’ brings hope and forward motion, de Picciotto’s violin carried on galloping drums from Unsane’s Vincent Signorelli, “onwards towards the light”.

At the centre of the album they turn outwards to face the Irish Sea, churning beneath a slate grey sky. It directly inspired the title track, which features Hacke’s throat singing, and the dramatic ‘Third From The Sun’ an epic propulsive piece that falls somewhere between Swans and Peter Gabriel’s Birdy soundtrack. The natural world and planetary concerns echo in the slightly hippy eco-lyrics of ‘The Seventh Day’ while ‘Metal Hell’ opens with a short poem about the bucolic majesty of the earth before descending into the ominous scrap yard rumble of its title.

There’s also a setting, in German, of Heinrich Heine’s ‘Loreley’ a re-telling of a folktale. On the face of it the record’s most obscure moment they included it upon learning that Heine intended it as a metaphor. The girl in the story representing a society corrupted by vanity, causing all the ships to sink. The idea that we are all in the same boat is a central one. Similarly, ‘Petty Silver’ features a parable like tale of human frailty. Perhaps the album’s brightest track it’s driven by a pulsing electronic bass line as if Suicide wrote a cod-religious pop nursery rhyme. Ultimately the people are abandoned to their own devices by their God, with some good old fashioned advice about protecting the earth and all being one.

Finally ‘The Black Pool’ brings us to a lament of fracture and reconciliation. Hacke sings of sincere friendship, his soft vocal interwoven with other spoken word perspectives from multiple voices. They include Blackpool’s most punk rock son, John Robb, speaking a fair amount of sense, and another voice bitterly sighing “Brexit is suicide”, (the only time our recent obsession is directly addressed). These elements are very skilfully balanced so that they are not piled into cacophony, all are clear but none dominate. You can follow them on repeat listens. It’s an elegant formal expression of the central message that maybe we should all listen more and shout less. After a final word of solidarity it drifts on warm synths out over the bay towards an uncertain future. As they said near the start “Onwards towards the light”.