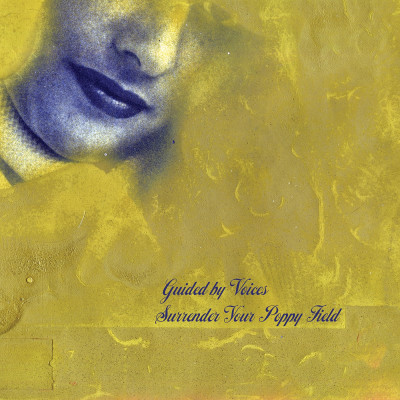 Surrender Your Poppy Field by Guided By Voices

Dayton Ohio’s lords of the indie rock underground Guided By Voices bring you a bright bundle of chant and chug, a spray and spatter of words. The colourful and carefree sounds of the 90’s folded and reassembled, cut up ‘n’ paste style. Surrender Your Poppy Field covers a lot of ground in its 15 songs, skilfully stuffing all kinds of materials into its power pop/college rock coat pockets for the ride. They’ve not given it a great cover though, a woman’s face partly revealed in a field of dirty yellow paint. Is the title something to do with The Wizard Of Oz? Are we off down the yellow brick road?

The first thing we hear is a scrap of found voice, a casual weather report. Then some lo-fi metal riffing before the song comes rolling in, we’ve not even hit a minute before it takes a left turn. It rights itself but another shift of tempo and a dash of spiraling ‘All The Young Dudes’ guitar is only seconds away. It staggers on like this to the end. A couple of times I thought we might already be onto the next song. This rapid cut ‘n’ shunt approach runs through the record. ‘Year of The Hard Hitter’ is unusual for being so long and kinda ragged. Mostly they shift smoothly through the gears, working a couple of sonic turns per tune into such a unified whole you can’t see the join.

Having set out this stall, recent single ‘Volcano’ sidesteps it with a sweet and trusted structure. It’s like a dreamy late Pixies chug, the chorus is not exactly volcanic but lifts on a soaring wall of guitar. A low key winner, it’s a relatively straightforward lyric for Robert Pollard and he brings a softly assured vocal to it. It’s almost like they’re saying “look, we don’t have to be scattershot and obtuse. But we like it.” After all that ‘Queen Parking Lot’ races by, a lo fi crackle of crappily recorded elements held in perfect balance. With a great title that makes for a weirdly declarative chorus ‘Arthur Has Business Elsewhere’ brings some big guitars and classic rock moves but seems, a little improbably, to be based on interlocking baroque fairground organ parts. Round we go.

‘Cul-De-Sac Kids’ is a prime example of the album’s volatile chops and changes of mood, tempo, and instrumentation. Moving quickly from acoustic strums into a power pop chorus, a short military interlude and winding up at a drawn out coda of whistling and strings. ‘Cat Beats A Drum’ provides a relatively calm and steady contrast. The second half of the record moves through an array of guitar textures and reassembled rock structures with skill and speed. ‘Stone Cold Moron’ sways with queasier distortion than elsewhere and nicely works in a police traffic stop as part of whatever’s going on.

One of the more unusual turns they take is the short but sweet ‘Whoa Nelly’ a minute long piece of filtered vocals and string quartet recalling the psychedelic 60’s fascination with Victoriana. As we come to the close ‘Always Gone’ has the sense of irresistible motion, a skyward glide that feels like we’re ending on a high, but there’s one more tune to go. ‘Next Sea Level’ is a minute of fractured lo-fi acoustics that cuts to insistent guitar and strings and the repeated word “rising.” A hazy suggestion of eco anxiety washing away on e-bow guitar and coming to a strangely abrupt stop.

They do a pretty great job here of making a cohesive record out of such a wide ranging set of sounds and ideas. A skillfully hand crafted patchwork of pieces, any ragged edges worked in or mended. The result is comforting like a family quilt. A familiar pattern of shapes with a pleasing richness of detail on closer examination. A work of traditional American folk art. For all the variety of sound, song arrangement, and approaches to recording, very little sticks out to really grab the attention. It never startles or confronts you, all smooth distortion aged in oak barrels. Time honoured alt-rock flavours. As we enter the 2020’s nothing about this album sonically even seems to make it out of the 90’s and into the new century and yet it’s in no way any kind of retro exercise. Does it matter either way? Not really. Guided By Voices are masters of a wide range of tried and tested techniques, working busily in the garage on their opaque but beguiling collages. We might ponder where they get the motivation but can’t help but be charmed by the results.