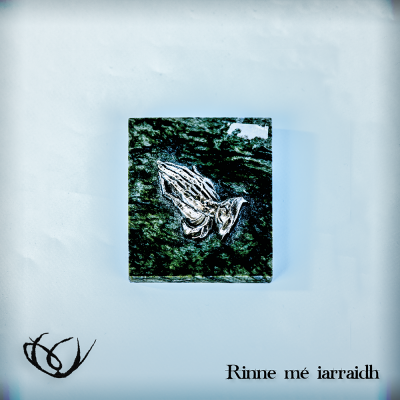 Fós is a musical project of Fionn Murray, who plays guitar in indie band Late Night Pharmacy and is former guitarist for defunct mathcore band Suzaku Avenue. But this is a totally different outing. His starting point was a traditional Irish singing style called sean-nós, which features mournful ballads sung a capella in a freeform fashion that avoids rigid structure. The style and tone of this singing is evocative of wild places, traditional ways of life and times gone by. It sounds both romantic and sorrowful, and conjures thoughts of windswept beaches, ancient standing stones and the natural landscapes of western Ireland. This mysticism is largely due to sean-nós being sung in Irish, and Rinne mé iarraidh is rooted is this traditional form of music and singing.

Murray’s reinterpretation of sean-nós was to pair it with heavy drones and ambient textures, adding, with luck, to the other-worldliness of the singing. With sean-nós singer Orla Cadden Patel he recorded four traditional Irish ballads and added music to them over the following year using guitar, field sounds, loops, percussion samples and industrial noise. The press release speaks of Sunn O))) and Boris as influencing the sound but on first hearing I was disappointed. There’s none of the sheer heaviness of Sunn O))) here, but that shouldn’t detract from what has been achieved.

It takes a little while to get used to the marriage of Orla’s pure voice and the background drones that have been added. The almost hesitant bass notes in first track ‘An raibh tú ar an gCarraig?’ make the music sound a little faltering. Orla’s voice is the strong counterpoint to this – shining through the aural mists created by the guitar drones and ambience. ‘An buachaillín bhán’ starts with distant chiming percussion and quiet feedback. The singing fits in well with this backdrop, and the gentle vocal melody of the song weaves among the gaps in the music.

Sometimes the music sounds bolted on: third track ‘Gabhaim molta Bride’ features a percussive interlude that interferes with the rhythm and gravity of the vocal. For me this track doesn’t work at all: the two elements clash rather than carrying each other like they do on other songs. But elsewhere the experimentation of Rinne mé iarraidh is a triumph, as on the opener, where the understated guitar and drone does its job of underpinning the haunting, beautiful singing.

The heaviest drones are saved for the closer, ‘A chomaraigh aoibhinn ó’, and this is where the stated musical influences shine through loud and clear. There’s a rumbling tension that runs underneath this track, and various textures and found sounds are woven in create a denser musical fabric than before.

All this goes towards making Rinne mé iarraidh an intriguing experiment in marrying two unconnected musical forms and creating something new. For the points where it works we get visceral, atmospheric music that breathes new magic into some gorgeous, plaintive singing and lifts it to a new height. At times the connection between the two doesn’t quite work, but it will be interesting to see how the Fós project evolves, and what direction this exploration will go next.