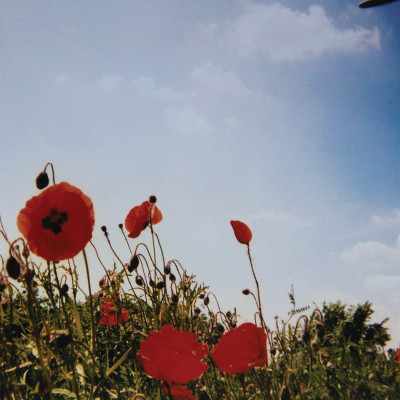 Fluisteraars’ new album Bloem is sort of flower-themed according to the press release, and there’s definitely a liveliness to the album, though all the fierceness you’d expect. A brightness, in the brevity and directness of the songs, as well as in the springtime brightness of the atmospheres even amidst the guttural screeching, give the record an invigorating and mind-expanding potential.

‘Tere Muur’ sets us up with a punkish, Darkthrone-attitude riff that’s instantly engaging, soon joined by hissing vocals that’s probably the more aggressive of the tracks, introducing the more introspective scope of the later entries.

Then ‘Nasleep’ at first is a wriggling flailing entity, before unfolding into a great gripping miniature epic. There’s a weird glitchy bit right in the middle of the chaos, a kind of a breakdown before the riff bursts in again but almost like a properly psychedelic lurch where suddenly the frame of perception shifts. Soon after there’s a line of calm reflective string picking, over a steady stream of light distortion that again becomes a torrent.

The great swaying riff of ‘Eeuwige Ram’ is matched alternately by the most insistent screams of the album and its most deliberate Dutch language flourishes. Here as elsewhere the bass playing really pushes the songs along, sometimes taking an atmospheric lead in pushing the driving psyched-out riffs. On ‘Vlek’ the tides of riffing are accompanied by ripples of acoustic strumming (is that a mandolin maybe?), while ‘Maanruïne’ features a chorus of voices accompanying the faintly pagan repetitions and circulations, before a final whorl of feedback ends the album.

For the black metaller, this will be a pastoral, even calming, yet still potent concoction, maybe a warming brew of herbs with some psilocybin spice compared with other areas of the subgenre that might be more akin to drinking lighter fluid. It’s a forceful, efficient and creative statement from the band who’ve been recently going from strength to strength, with this another important step forward.