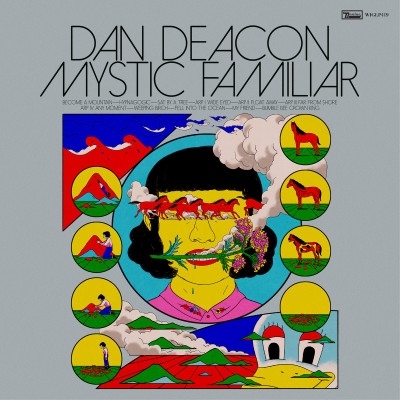 What better way to shake off winter’s numbing shroud and turn towards spring than the smiling return of Dan Deacon? Mystic Familiar is another life affirming shot of his multi-coloured hyperkinetic electro psych. As the title implies Dan’s been looking to transcend and become one with the universe and his new album offers a typically over saturated vision of both life and music as a wild psychedelic adventure.

It’s been five years since Gliss Riffer during which time he’s leant on his training as a composer, completing soundtrack work for HBO and collaborating with the NYC Ballet and Baltimore Symphony Orchestra among others. Following the cast of thousands epic of America (2012), Gliss Riffer saw him return to working completely solo and making more use of his voice. Likewise Mystic Familiar picks up these threads, stepping back from large scale instrumental collaborations, further entrenching a split in Deacon’s music and method between the communal and the increasingly personal. The imagery of the natural world and his use of voice are both developed further.

The first song ‘Become a Mountain’ begins with steady piano and Deacon’s unadorned vocals. Although they’re soon crowded by swirling arpeggios. If you hadn’t already guessed, Dan’s been meditating some. He’s also been making use of Brian Eno’s Oblique Strategies cards when writing. The aptly titled, palate cleansing, minute of ‘Hypnagogic’ is the only thing here you might truly consider meditative, and carries a delicate Eno echo of Another Green World. It runs into the energizing opening beats of ‘Sat By A Tree’ which brings more man meets universe lyrics riding on soaring melodies and Deacon’s voice both processed and natural.

It’s a feature of this record that his vocals appears unprocessed for the first time, although they still sit among a choir of machine tweaked siblings. Deacon’s voice hovers somewhere between Wayne Coyne and Jonathon Donahue, which seems fitting enough, if you can visualise some notional electronic midpoint between Mercury Rev and the Flaming Lips around the turn of the century you wouldn’t be too far off the vibe here. Completing a trio of songs addressing cosmic revelation in natural environments ‘Fell Into the Ocean’ is the most hippy dippy of all and finally goes just a little too far for my liking. It’s still pretty enough, bobbing on relaxed electronic waves and, for Deacon, there’s an unusual amount of space in it. Ultimately though, it sounds like the Teletubbies playing Spacemen 3’s ‘Big City’ on all the happy clappy drugs, “First you must relax before transcend”? Come on, man.

Otherwise he does a fine job of getting away with it, I must be mellowing. There’s a lot about this album that might once have raised a red flag. It’s a concept album for starters. The concept of the Mystic Familiar is some suitably vague blend of your internal monologue, God, and a spirit guide. You can see how the stage is set for the worst kind of navel gazing, Carlos Casteneda style flim flam and half baked stoner hogwash. It mostly avoids that kind of excess and earns your patience, painting a picture of Dan as an open hearted guy who loves the world but has been kicked around by it.

At the centre of the album is a four part suite called ‘Arp’. After a minute of percussive Matmos squelches the first part ‘Wide Eyed’ opens on the line “there’s a darkness, in this place. There are fears I cannot face” and it feels so honest and vulnerable it cuts right through. As a whole ‘Arp’ is probably a haphazard mess that won’t stand up well over time but it moves along quickly and charmingly enough. ‘Float Away’ is full of his usual busy rhythms and abstracted synth lines. ‘Far From Shore’ floats in on loose whale song saxophone and just as the synths come in and you’re starting to think it’s gone a bit prog a robot voice repeats the lyric and you know it has. The vocal spirals helium high and everything accelerates out into the universe. It’s less cosmic revelation than it is eye shaking panic attack

It’s a regular and contrarian delight of Deacon’s music that he weaves structurally minimalist elements into his absurdly maximalist sound and his composer’s roots are showing on ‘Weeping Birch’, basically a lovely classical string piece in a brightly coloured electronic outfit. As we come to the end ‘My Friend’ might be the most affecting song he’s yet written, a heartfelt hymn to the anchoring power of friendship and a confrontation with loss. The lengthy closing instrumental ‘Bumble Bee Crown King’ is perhaps an attempt to condense the whole mad journey into a single piece. If so it fails on that count but it’s nonetheless a dense and melodic slab of twinkling electronics that shimmers pleasingly by. Always an uplifting experience, it’s good to have him back.