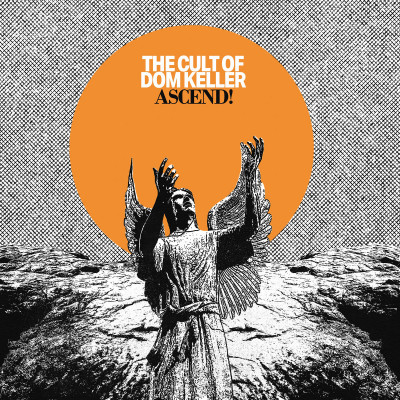 Ascend! by Cult Of Dom Keller

Slowly building a back catalogue of increasingly expansive psych, and gathering a reputation as one of the UK’s best underground bands, Cult of Dom Keller have been steadily poking holes into the darker realms of psychedelia, edging it into a point where they could quite easily sway from gothic post-punk into screaming white noise in the space of one song. On Ascend!, their sixth release, they head straight into the heart of intense space rock from the very start…and oh boy, they do not let go.

A brief interlude is a calm in the chaos before the turgid riff of ‘I Hear The Messiah‘ signals a haunting, almost gothic swirl of noise, as submerged vocals colour a track which envelopes your mind. It becomes difficult to grasp a hold on the waves of noise as they roll over you. Only the guitar offers a brief glimpse of something clean amongst the cobwebs and nerve-endings of a pulsating beast. It’s akin to getting close to the tentacles of some weird Lovecraftian imagination, a Messiah to hold you tight in its bleeding, ravenous arms.

Within the face-melting noise is a moment of reflection on ‘Beautiful Sickness’ which carries an almost religious like fervour to it’s calm heart. This is only serves to accentuate the true power of the opening riff to ‘The Blood Donor Wants His Blood Back’ which manages to out-Heads the Heads in all its propulsive glory. An explosive blast of sublime riffology, it’s cyclical rhythm becomes a free-wheeling blast of heat within the cold white noise of the rest of the album. A burst of light within the darkness, a final Catherine Wheel of life before yet another descent into the bleakness of ‘We’re All Fucked(Up)’. If ever a song title said it all…

By the time the momentous ‘Jam For The Sun‘ begins it’s launch, you almost feel like there is nowhere left to go. CoDK save some of the best for last though and as the organ provides lift off, it dissolves into a hypnotic trance. Keeping it simple, and based on repetition, it provides a way to chill down after the roar of what has gone before. Almost as if the motors are coming to a stop, the band take the pressure off the gas gradually, leaving you in a complete silence as you start to digest what you have just heard. Perhaps that silence, at the end of the album is the perfect full stop to an album which at times defies description. It’s chaotic, loud, gothic and brutal, but most of all a perfect example of where space rock is right now. It’s pretty much a masterpiece of the genre and serves as the bands best release so far.