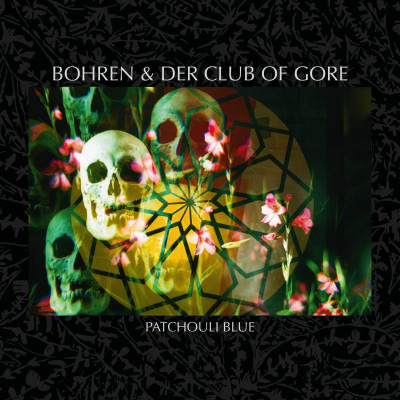 The fog is turning to rain as I push through the doors into the old Club of Gore. The place has been closed up for a few years but nothing much has changed, it’s still comfortably frayed around the edges. Organ drone swells up from the background, cuts out. They kept the worn fittings and the gloom, smells like death rock. After a couple of minutes the saxophone sighs softly, like a friendly hand on your shoulder. Patchouli Blue just fell into my lap, new information at short notice. The hardcore had the jump on me all along. By the time this review makes it out they’ll be soaked in it, hip to details I haven’t had time for yet.

Bohren & der Club of Gore play a superbly unhurried type of slow core doom jazz. The sort of stuff to make long shot film noir images spool across the mind’s eye and your internal monologue turn all hard-boiled detective without warning. New faces at their notional dive bar turn on their heel pretty sharp or settle right on in because it feels like home. Companionship in solitude, nobody pulling on yer sleeve and making noisy chit chat, it’s all existential brooding on life’s mystery in here. If you’re coming to it cold then what Patchouli Blue most sounds like is Angelo Badalamenti’s dark jazz mood music for Twin Peaks. Only slowed down and left to wander the woods. It’s what’s playing on the jukebox in Audrey Horne’s coma.

Still, as much as I love Badalamenti’s music and as helpful as the comparison is I can’t help feeling it does the band something of a disservice. Twin Peaks’ strong visual and sonic identity has been widely influential and there are plenty of bands who model their look and sound on elements of that or more widely on the idea of noir soundtracks and ‘crime jazz’. That stuff is fine as far as it goes but what they often end up with is kitsch. A grab bag of musical short hand and manipulative tricks used to emphasise on screen action. An empty shell, all style with no heart.

Bohren & der Club of Gore don’t do any of that. The instrumentation may be the same but their purpose is more open. While it might be fair to call it mood music the overall mood is contemplative, it never manhandles you roughly towards emotional cues. Bohren’s music is flowing and mellifluous but rarely if ever settles on the kind of short, repeating, melodic phrases you might catch yourself absent mindedly humming. They don’t do riffs and they don’t do wild improvisational flights either, creating a steadily drifting sound field for you to float in. It’s in this patient enveloping of the listener that their improbable roots in doom metal are revealed. Equal parts comfort and dread are wound about one another and across your shoulders like a heavy blanket.

I couldn’t tell you which track was playing because they are merely parts of a whole. The titles are all in German except for the actual title track, the first time they’ve ever indulged such a thing I believe. It perhaps explains the kaleidoscope of skulls and flowers floating before a church window on the cover. It looks like an album by a hopelessly derivative young bunch of goths. Is there Goth Jazz? Should there be? According to the band themselves this album is four parts ‘classic Bohren’, three parts ‘strange’ and four parts ‘jazz lurkers’. Words don’t really serve them well, ‘ambient jazz’ makes sense as you listen, but just out there by themselves those two words falter, offering up some unwelcome associations with smooth aural wallpaper. ‘Jazz lurkers’ is perfect though, for the band, for their music, and for the tired solitary patrons of this imaginary bar. Lost in their thoughts, and their whiskey, and that soft breathy saxophone.