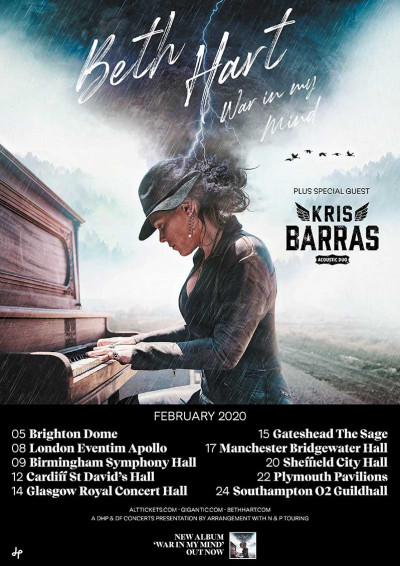 The signs were already there for anticipating what turns out to be an emotional performance of astonishing proportions. Beth Hart’s current album War in My Mind is arguably her most personal, cohesive set of songs yet dovetailing themes of family, addiction, and mental illness. While the pre-show dark-blue lit stage, with the backdrop screen radiantly showing her ninth studio album’s title, still doesn’t quite prepare this reviewer for the staggering emotive whirlwind of a display Beth and her incredibly talented band of brothers – guitarist Jon Nichols, drummer Bill Ransom, and the returning Tom Lilly on bass after an absence of seven years – conjure up a mesmerising two-hour show.

The lights go down, the screen bursts into life for a quick blast of the newly released Disco-pumped ‘Sugar Shack’ remix. Enter stage left, Jon, with an acoustic guitar under red lights; all eyes focus on the stage –  but no Beth – until the sound of her strong distinctive, gritty but soulful voice is heard singing ‘There in your heart’. Heads are turned as Beth dressed in white is seen at the back of the theatre.  She slowly walks down the aisle as audience members grow in confidence to give her hugs and snap selfies to a very responsive and multi-tasking Beth. This is how to make an entrance! Nearer to the stage she is greeted by her sister with the biggest cuddle of them all. The special, intimate occasion of the night is open for all to see. 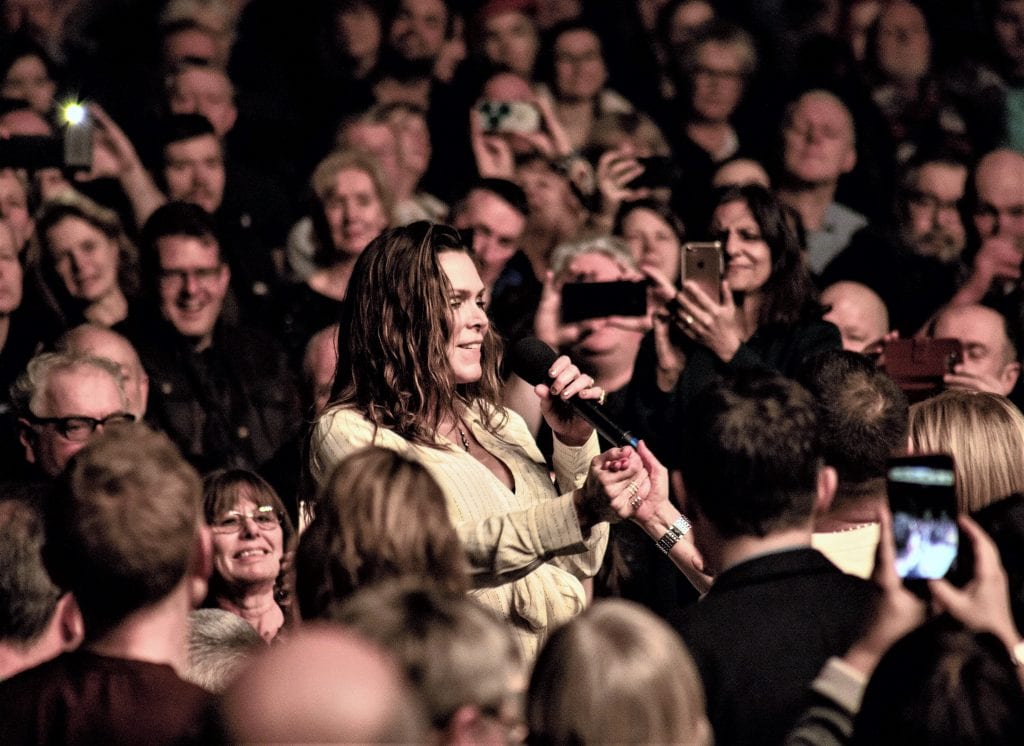 Headlining this legendary music theatre for the first time feeds into the special night’s vibe. Beth is all beaming smiles in her between-song banter, excited by the songs she is going to play as she enthusiastically asks, “who likes Tom Waits?” as the band commence through a committed version of ‘Chocolate Jesus’ seemingly relishing its crazed, intense note-playing. Eight songs are aired from War in My Mind and they all leap out in impressive style. ‘Bad Woman Blues’ is a walloping huge catchy bad-ass attitude of a tune. The “ballady” section includes ‘Dear Sister’ as Beth asks, “am I getting too emotional for you? It’s an emotional night” – and she isn’t wrong there – before Beth on piano and Tom on upright bass go all late-night smokey-jazz vibe with ‘Without Words in the Way’.

If there is particular highlight from a show which is practically just one constant high point, then it is how Beth catches someone in the front row returning to their seat and asks playfully “did you go for a pee?” before turning our attention to the song ‘War in My Mind’ and its very personal subject matter with an honesty to be admired. She sings with such emotion that she gets caught up in the song’s meaning, pausing and apologising to the band before lurching straight back in. Real life experiences do indeed inform her songs.

The variation of moods and styles throughout is remarkable: alongside War in My Mind’s eight songs are five covers and a scattering of songs from earlier albums including the grungy Screaming Trees-ish ‘Water Falls’. We are told her favourite part of the show is when she sits at the front on a stool, with the band at her side for a batch of acoustically played songs. She springs a surprise on her bandmates in the form of ‘I’d Rather Go Blind’ by the great Etta James – you could not tell, such is their professionalism, and the audience responds with an exuberant standing ovation. 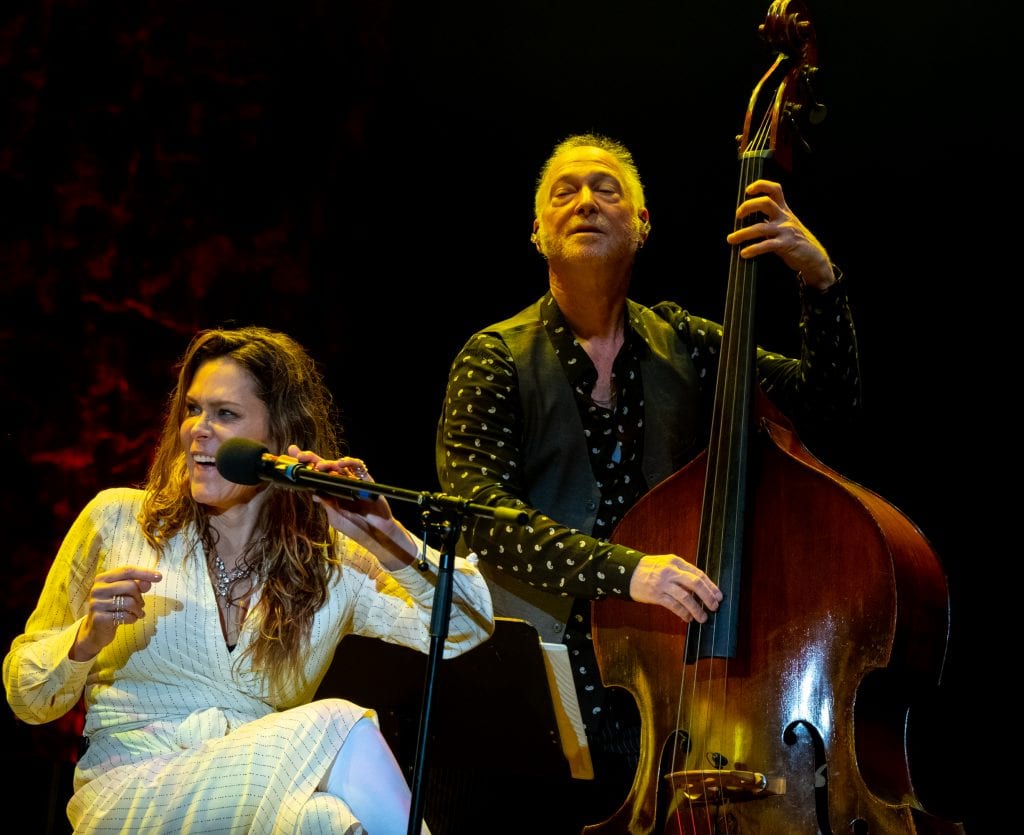 Beth returns alone on piano for a towering ‘Woman Down’, wringing every last drop of emotion she and everyone else has left in them.  Still wanting to play one more song but informed the two hours are up – they have flown by – Beth calls the band back on, and all four are rightfully greeted with another explosive standing ovation.

The house lights go up and myself along with those around me try and put into words what we have witnessed. An hour after the show, making my way home on the train, tears are still welling up. Beth Hart put on one hell of an emotional roller-coaster of a ride; an incredible captivating tour-de-force of a performance that will stay with me for a very long time. It was a privilege to witness such an extraordinary artist. In a nutshell – stunning! 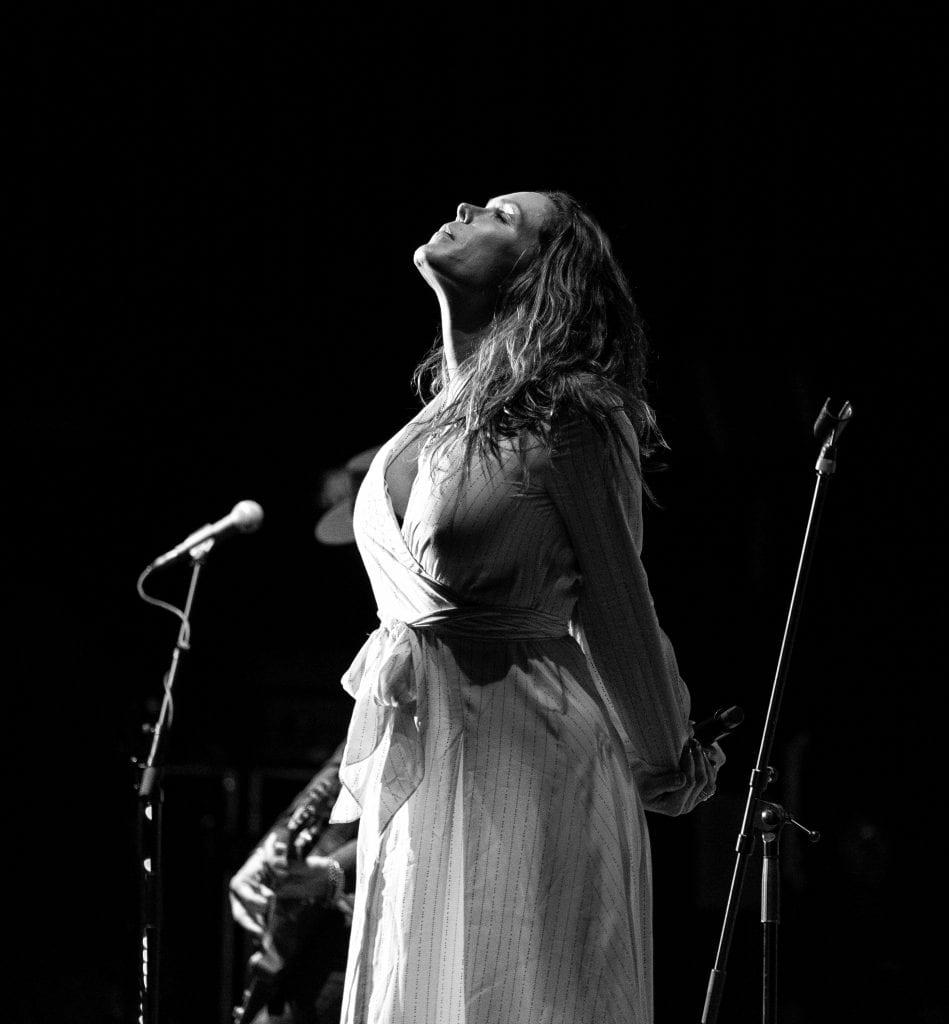 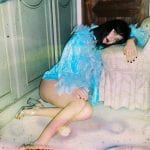