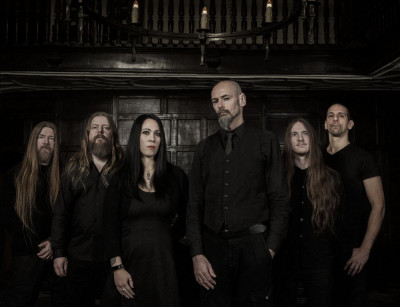 We often can’t see the wood for the trees and just get down to doing what we do best and hoping its going to turn out great and better than the previous outing.

My Dying Bride are one of this country’s most revered metal bands and their gothic-tinged doom metal has influenced so many bands from across the globe. Ahead of the release of their new album The Ghost Of Orion, their first since 2015’s Feel The Misery, Gavin Brown caught up with vocalist Aaron Stainthorpe to hear all about it, My Dying Bride’s new members, the video for album track ‘Your Broken Shore’ and guest appearances on the record, as well as memorable moments from the bands career and gigs and playing football with Iron Maiden!

E&D: Your new album The Ghost Of Orion is coming out in March. How did the creation and recording of the album go?

Aaron: Well, considering I was nursing my daughter who had cancer, I had very little to do with the writing of this LP except right at the end when I was needed because everything else had been recorded. Andrew wrote almost all of it on his own which is testament to his skills as a songsmith and he did so after Calvin and Shaun Taylor-Steels left band too!

E&D: It’s been five years since your last album Feel The Misery, does The Ghost Of Orion follow a similar musical path or does the music on the album take different forms?

Aaron: That’s a good question and one I find difficult to answer because I am on the inside looking out. The best people to answer that are those on the outside looking in. We often can’t see the wood for the trees and just get down to doing what we do best and hoping its going to turn out great and better than the previous outing. We’re never really sure how it’s going to turn out. Sometimes it’s similar to the last one and sometimes a bit like an earlier offering. Time will tell.

E&D: The album is the band’s first with former Paradise Lost drummer Jeff Singer and Valafar guitarist Neil Blanchett. How did Jeff and Neil fit into My Dying Bride and what do they bring to the sound of the album?

Aaron: Neil arrived after the LP was recorded so doesn’t appear on it but Jeff came in after Shaun left, at quite short notice too, and did a fantastic job! He’s like a machine – works hard all day long and never makes a mistake! Both guys will be coming on tour with us as well as new sound guy Mark Mynett who also produced and engineered the album, so a fist of new faces for 2020.

E&D: The brilliant Jo Quail appears on the album. What did she bring to the tracks she appears on?

Aaron: A great deal of additional atmosphere and mood. She played what we wanted first then made up her own stuff and was truly brilliant!

E&D: How did you come to work with Jo in the first place?

Aaron: The studio engineer Mark Mynett knew her so got in touch when we thought it would be nice to have a cello. What she does for us is nothing like her own solo material, but I encourage people to go and check her out as it’s great stuff.

E&D: What does the albums title refer to?

Aaron: Can’t tell yet, sorry. It’s a little mystery we’d like to keep under wraps for a few months.

E&D: You have just done a video from the albums first single ‘Your Broken Shore’, can you tell us about the video?

Aaron: It is available now online and features the whole band as well as Jo. There are nice indoor shots artily made in monochrome along with colour footage of the band going nuts in a forest and river. Quite spooky and a bit creepy in places but all intriguing stuff. It took a couple of days to create and was actually a lot of fun to do despite the constant rain and the freezing conditions. It features Jeff and Neil too, the two new members, who also had a blast doing it.

E&D: You’re playing at the Lords Of The Land with Memoriam in Glasgow in April. Are you looking forward to that show?

Aaron: Sort of. Nervous as it will be the first live performance for nearly three years! With new members! Rehearsals are going well but the nerves are building already!

E&D: You’re also playing at Graspop festival in June. Will you be playing more festivals over the summer as well?

Aaron: Yes we have a bevy of festivals this summer and are working on a headline tour as well. I guess checking Facebook is where you’ll get all the dates.

E&D: Will you be playing a lot of new material from The Ghost Of Orion in your sets?

Aaron: No. Two tracks only due to the fact that we have a million songs and only an hour to cram them in. We must do some of the classics naturally and a few from various albums as well as a couple of new ones. It gets harder and harder with each release to pick a set list for live gigs but we really try to cover as much back catalogue as possible.

E&D: What are your touring plans for the rest of the year?

Aaron: Festivals and a tour but the tour is under wraps until the logistics are sorted.

E&D: What is the most memorable show that you have played with My Dying Bride?

Aaron: We did a blinder in Paris about 15 years ago. The crowd screamed throughout the whole performance like we were the Beatles back in the day. It was tremendous!

E&D: You embarked on a lengthy tour with Iron Maiden back in 1995, how was that experience?

Aaron: Brilliant, especially when we got to play on the Maiden football team. Steve Harris has his own tour bus and it’s filled with all the kit including boots of every size so we donned the gear, went onto the pitch (Stockholm, Glasgow and Milan) and Rick promptly scored the first goal. It was a dream come true. We were all Maiden fans so this was bloody magical!

E&D: Who have you loved touring with the most and what made it so unforgettable?

Aaron: Maiden were ace and so was our US tour with Dio. He was such a lovely bloke and treated us extremely well. He is greatly missed. On the Dio tour, some of the stages were too small for us and them so we couldn’t open up for them so we would end up being given VIP tickets to a local strip bar as a sort of compensation, which was great fun.

E&D: The band celebrate their thirtieth anniversary this year. Will you be doing anything to celebrate this occasion, aside from the new album?

Aaron: We have nothing planned as is our usual miserable standards, but we did mention it to Nuclear Blast UK who seemed excited to do something so watch this space as they say.

E&D: When you first started the band, did you ever think that it would last as long as it has?

Aaron: Nope, because we had an obscure name, wrote miserable songs, mashed doom and death metal together with added goth, it seemed a recipe for disaster. But the ingredients seemed to actually work and we did OK for ourselves. Also, My Dying Bride for us is still a hobby. We do it at the weekends and the odd evening so that keeps it simple. Why give up a hobby you love?

E&D: What are your main memories of the early days of My Dying Bride?

Aaron: Mostly the touring which is great when you’re a young band. Booze, girls, metal, seeing the world (from a transit van) all bliss. Playing with similar bands was great also. We packed in so much in those early days which have stood us in good stead to this day. No regrets from me.

E&D: How does it feel to have been an influence on so many bands?

Aaron: Brilliant, but I don’t let it go to my head or I’d turn into a rock-star dick. We were influenced by like-minded bands so we know just what it feels like to follow a leader you admire.

E&D: What have been your proudest moments from your career with My Dying Bride?

Aaron: Maiden (again), Dio, having gold discs on my wall!!! Seeing the world! Hearing younger folk say how much they adore us. We have put the hours in for sure – nothing was easy in the early days so you had to work at it, so I am proud that we’re still here and still actually pumping out great music! Long may it continue.