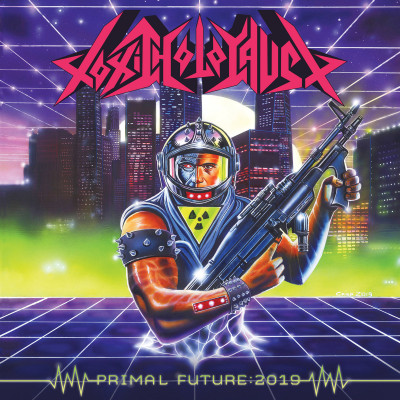 Joel Grind is one of the most prolific musicians and producers in metal today, he has leant his keen ear for that raw take on metal and studio experience to work with bands such Cavalera Conspiracy, Exhumed And Power Trip and thus, is able create a multitude of killer albums in a mastering capacity. In addition to this, his role as mainman in Toxic Holocaust is a big part of his musical life and the band takes priority again with the arrival of their new album Primal Future: 2019, which is a welcome addition to the vast canon of work that Grind has been involved in. Just one look at the artwork for Primal Future: 2019 (which pays tribute to the classic schlocky and neo-futuristic B-movies of the 1980s like Escape From New York, Class Of Nuke Em High or The Exterminator) lets you know that you are going to be in for a retro thrash workout, which Toxic Holocaust are real masters of.

The artwork is prophetic for the music that features on Primal Future: 2019, as it is an album that deals with how technology is taking over, but from a 1980s perspective looking to how fucked the world would be in 2019 (only time will tell if it comes true!), an era when a toxic holocaust was a very real proposition and this gives it a knowing look of the trouble the world could now be in given the state it is in.

There is a real throwback feel to the album but rather than being a hackneyed nod to the 80s, it is executed with pride, energy and a real sense of fun which does give it a timeless feel like so many classic speed metal, thrash, hardcore and crossover albums.

With the bands main influences being the likes of Discharge, Celtic Frost, Motörhead and Venom, you know that raw thrashy blasts of power are the order of the day and the songs on Primal Future: 2019 are definitely no exception. Songs like ‘Chemical Warlords’, ‘New World Beyond’, ‘Iron Cage’ and the anthemic ‘Cybernetic Warfare’ full on bursts of metal that power through and don’t let up until their times is up and sound all the better for it. Metal, thrash, hardcore punk and death metal influences are all here in force, all thrown together to create that rawness that Toxic Holocaust have made their name on and whether its ultra fast blast of energy or slower dirges of noise, it all has that rawness and classic nature that captures the greatness of 80s extreme music in a nutshell.

Primal Future: 2019 is an album that will appeal to anyone who has ever had their world turned upside down by albums such as Seven Churches, Welcome To Hell and Iron Fist or those classic 80s movies and is a brilliant slice of raw heavy metal with a healthy side order of nostalgia which makes the experience that bit more magic.