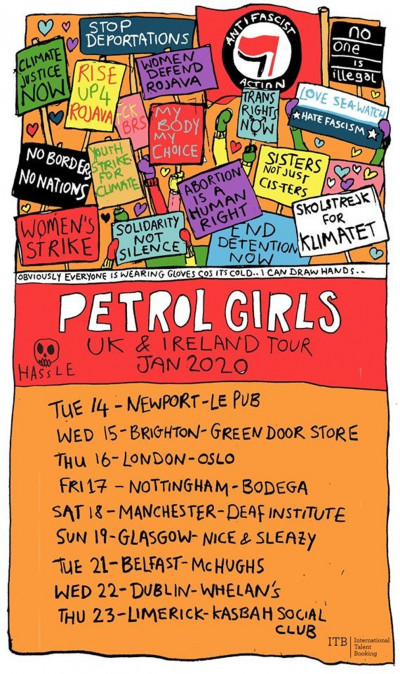 Busy times for raging feminist punks Petrol Girls as they kick off the new decade with a UK tour before a return to Europe in February, and then head off for a North American tour starting in March. This is coming on the back of touring Europe supporting Post-Hardcore pioneers Refused at the tail end of 2019. A year which also saw the band release their highly acclaimed second album Cut and Stitch. An album as good as that is, Petrol Girls live is a must, as every song played tonight leaps at you with an immensely powerful force, with impressive directness, robustness, and urgency.

In their 50-minute set, all the songs come alive; feverishly driving angular rhythms, interestingly diverse guitar chops, and a sharp ear for melodies that cut through with clarity, while never diminishing their ferocious, attacking musicality. Leading from the front is vocalist Ren Aldridge’s energising, no-nonsense, and purposeful stage presence. But what probably impresses the most is just how incredibly tight a unit they are.

For the first points of reference, Fugazi and Refused are the most obvious key influences, but that is only a guide as the politically fired up Petrol Girls make a sound which is truly their own. The crowd’s all-in receptive call-to-arms response to the explosive ‘Touch me Again’ is a highlight, while ‘Sound’, ‘Monstrous’, ‘Big Mouth’, \nd ‘No Love for a Nation’ are all exceptional tonight. The latter’s anti-populist nationalist message is also the cut-and-stitch backdrop banner. As Ren notices for those towards the back of the venue this may read as “For a Nation” due to the stage lights blocking the top line of “No Love”. But it would be wrong to think their message will not be made clear as Ren’s fully charged in-between-song banter imparts a combination of the song’s intent, current campaigns the band are involved in, and how you can support and get involved. This includes Solidarity Not Silence, set up for women to feel they are not alone in standing up and speaking out against sexual harassment and violence.

To say Petrol Girls have a righteous sense of purpose is somewhat of an understatement. They are deeply rooted in a D.I.Y politically active community and they are genuine in their pursuit for a better, more gender-equal society. They are not only currently at the forefront of making some of the best Post-Hardcore punk today, but they also possess their own extremely strong sense of identity. Tonight’s excellent performance cements how relevant and vital they are right now in these troubled, uncertain times.