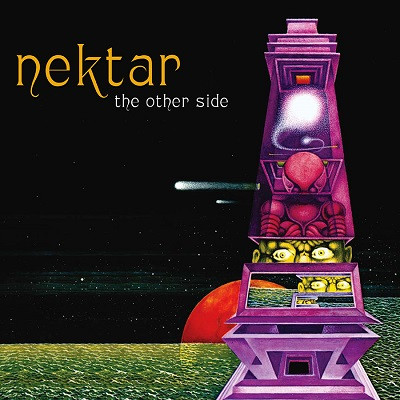 The Other Side by Nektar

With supporters that include Iron Maiden, Captain Sensible of the Damned, Ian Curtis of Joy Division, and the Grand Wazoo himself, Frank Zappa who travelled with Nektar during his European tour at the time he was promoting his seventeenth studio album, Over-Nite Sensation. For 50 years, Nektar were often under the radar in the history of the Progressive Rock genre. So far, they have released 13 studio albums from 1971 to 2013.

From classic albums ranging from A Tab in the Ocean, Remember the Future, Journey to the Centre of the Eye, and one of my favorites, Down To Earth. Nektar have kept their music growing for many, many years to come. After the loss of their original founder guitarist and vocalist Roye Albrighton who passed away in 2016, the band decided to call it a day. But then in 2018, they came back as “New Nektar” with the release of Megalomania.

But now, with this new version of Nektar, it contains not just the original members that feature Derek “Mo” Moore on Bass Guitar and Ron Howden on Drums, but new members that includes Ryche Chlanda (Flying Dreams) on Guitar and Vocals; former member Randy Dembo on 12-String Guitar and Bass; Mick Brockett on Lights, Atmospheres, and Projections; and Kendall Scott on Keyboards. That and their new studio album released on the Esoteric Antenna label entitled, The Other Side, shows that Nektar are continuing to move forward and keeping the legacy growing.

This album provides a welcoming return for the band to wake up by taking a chance to climb aboard and seeing our lives change across the ocean’s floor. The genesis of the story came about when Ryche was recording with Nektar in 1978 to record a few tracks in Derek’s basement in Chatham, New Jersey. However the music was put on hold. And now in the year of our lord 2020, they brought three of those tracks to life.

The Other Side is like opening up the doors to a beautiful art-deco-esque hallway with an eye-opening experience. They know that Roye will always be watching them up in heaven. It’s almost as if his spirit is telling them to keep the Nektar ship flying into outer space to see where the future will be for the next generation of musicians to discover this incredible band. And to be allowed to have original Nektar’s original artwork designer Helmut Wenske who had done the album cover on The Other Side, it shows that he is not only as a collaborator for the band, but also a good friendship between them as well.

Opening track, ‘I’m On Fire’ which was from the sessions of the 1978 period, starts off with Kendall’s roaring organ sounds as the band sets up the track by sending us back into space and time for another journey across our solar system. You can hear some of the aspects between A Tab in the Ocean-era and Premiata Forneria Marconi’s ‘Celebration’. I love how they zoom into the outer limits with a climatic crescendo in the midsection as they prepare another hurtle towards the cosmos. It is a great way to start the album off with the jump to lightspeed. And those killer guitar lines that Chlanda does are bluesy, chugging, and climbing up towards the heavenly skies as if the other four are following him to boldly go where no man has gone before.

Kendall does this electronic loop on ‘Love Is/The Other Side’ while Dembo’s 12-string guitar comes in center stage to bring the listener a gift of hope and stronger love that is inside our hearts before it goes into this mid-80s ballad while Scott’s ascending organ opens up the sliding guitar structure as Nektar channels The Shadows ‘Apache’. This shows the band taking us into a future that is bright and seeing where the new decade will be for many years to come.

At the 11-minute and 7-second mark, Kendall plays this wonderful piano concerto as the guitars go into this Beatle-esque melody with the vocals taking us deeper inside the other planets that will await us for some mellowing beauty as the listener opens up the window to see the gorgeous structures of the milky way. From the sounds of Howden’s drumsticks clicking on ‘Skywriter’, the guitars are setting off for another voyage. This song was originally titled, ‘Skypilot’. It has finally spread its wings to fly and given a second chance of life. You can tell that the engines are driven for another light-speed run in the halfway section. I was surprised on how Chlanda’s vocals has this calming effect as he takes the ship into another complexing change. When I heard Roye Albrighton’s vocals and guitar lines on ‘Devil’s Door’, I got a little emotional hearing his voice again.

As I’ve mentioned earlier, you can feel his spirit around the legacy of the band’s work. And to hear him sing for a bit and playing his guitar, You might want to be prepare to bring some Kleenexes with you on ‘Devil’s Door’ for the first minute and eighteen seconds of the piece. What I love about this track is that not only is it just proggy, but how Kendall’s synths and organ go into this soulful-jazzy approach.

Nektar’s spaceship travels into the kings of twilight for some heavier orientations between the rhythm and lead sections to stay away from the doors of the devil. And making sure not to make a bargain with him. Because he might have a card underneath his sleeve. With ‘The Light Beyond’, this shows the band going into their symphonic structure. For Kendall, he takes his keyboards into a pastoral electronic voyage to prepare the journey back home.

Ominous chords and keyboard strings on ‘Drifting’, heads into these darker areas that would send chills down your spine. The atmospheres between Chlanda and I think it might be Derek’s Rickenbacker, sets up this walk towards a spiraling staircase into madness that Ryche does. It’s almost as if we are revisiting the Astronaut who was the main character from the band’s 1971 debut album, Journey to the Centre of the Eye. I could tell that he has now gone completely insane and delving into paranoia after the events of the story by paying the ultimate price. Moore, Howden, and Chlanda give us these disturbing details on what has happened to the main character. And believe me, it isn’t pretty.

When I was listening to ‘Look Through Me’, I could tell that Nektar have put their toes into the waters of the Once Again-era from Barclay James Harvest by showing their acoustic side, singing in the styles of ‘Mockingbird’, honoring John Lees himself. It tackles the subject matter of taking a look at their reflections in the mirror by showing how much damage they have done by becoming their own worst enemies.

The finale, ‘Y Can’t I B more Like U (2020)’, sets Nektar’s ship on dry land. I felt a little tug between side 2 of The Beatles swan-song of the Abbey Road medley before swimming into the rivers in the last two minutes resembling both ‘Remember the Future’ and Rush’s A Farewell to Kings as Howden channels the late great Neil Peart in the closing section as he honors the Professor’s drum techniques.

In the summer of last year, after the announcement of Nektar’s reformation, the band decided to launch a Kickstarter campaign to complete the album. In the campaign video on their Kickstarter website, Derek mentions about why they wanted to use Kickstarter. And the reason for that is that they wanted to generate necessary funds and freedom in a suitable manner without the record companies getting in the way. They made a pledge to reach their goal of $28,000. And on August 30th of 2019, their Kickstarter campaign was a success by reaching their pledge of $33,667 with 235 backers. Now was this album worth the wait to start the New Year off with a bang? Absolutely!

As I’ve mentioned earlier, The Other Side is a warm welcoming return for Nektar. And for them to be a part of the Cherry Red family with Esoteric Antenna, home to Rosalie Cunningham, Fish On Friday, Nick Beggs, and Tony Patterson, they fit in really well. Let’s hope that the label reissues some of their classic albums in the new decade. Who knows what Nektar will think of next in the roaring ‘20s.