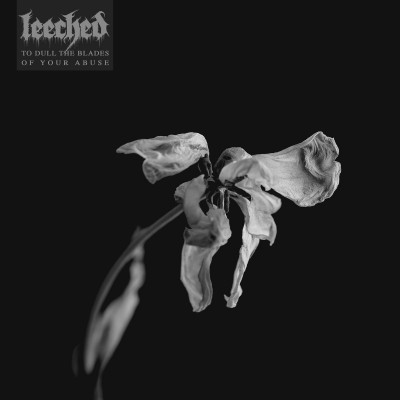 To Dull The Blades Of Your Abuse by Leeched

Due to restricted timescales it recently took me three evenings to watch the gangster film The Irishman. On the second of those nights I had a dream that one of my friends was going round shooting people and eventually wound up killing one of my other friends whilst I was in the room. As I began to wake up hoping it was all a dream an abrasive riff was repeating round and round in my head. Not only had the film slipped into my subconscious, but it was sound tracked by To Dull The Blades Of Your Abuse, the sophomore effort from Manchester three piece Leeched. There is no doubt this is one of the heaviest bands in the UK right now and they have managed to up that a notch by adding a disturbing, desolate atmosphere to the mix of its abrasive metallic hardcore. This album will haunt you when you are asleep and even when you aren’t.

Leeched are the glacier and you are the rock face, the sheer weight and aggression rips apart even the toughest formations and at times the movement is fast, but the slow ones can do the most damage. Whilst tracks such as ‘I, Flatline’ and ‘ Earth And Ash’ bombard from the go with a mix of pummelling gritty drums, dark bass and scratching guitar licks, it’s the moments in ‘The Grey Tide’ and ‘Let Me Die’ that accentuate the albums heaviness.

To remain so aggressive Leeched switch it up so that you don’t get Stockholm syndrome and see the album slip by. The doomier moments change the landscape and allow the extra density of the music to soak into you. ‘Now It Ends’ follows the tremendous guitar line of ‘I, Flatline’ with a repeating line that sounds like an ambulance siren. Here, the vocals reach out of the dirge of bass and drums like an arm and drags in any who thought they survived the onslaught and sets up beautifully a run of songs with renewed extremity.

This is a far more sinister affair in comparison to the previous release You Took The Sun When You Left as there is a darkness suffocating every moment of the record. Tracks such as ‘Praise Your Blades’ benefit from this as even in movements between riffs the atmosphere keeps you penned into the album and each divergence feels like a hit from a different direction. It is also another huge success for Manchester’s No Studio which has captured some great releases in the last few years and has done superbly well to ensure the sound captures the catharsis in depth as well as despair.

There is no sophomore slump here as Leeched manages to reach new heights of aggression without simply playing faster. A new depth in sound has brought out their most terrifying aspects and if this doesn’t creep into your dreams you need to eat more cheese and see where the ride takes you.