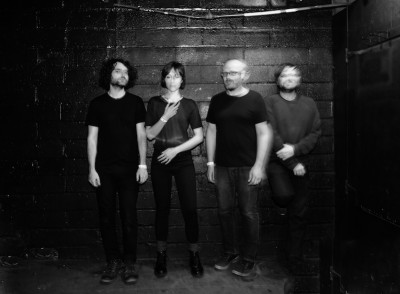 Many of the collaboration came out of the People Collective Festival in Berlin in 2016 and 2018. The buds of creative friendship lasted and bloomed back to Minneapolis in making this record.

On January 31st, Poliça releases a new album titled When We Stay Alive via Memphis Industries. It’s an album where co-founder/vocalist/songwriter Channy Leaneagh “realises the power in restructuring her inner self. The album’s title references the idea of moving forward through life—our experiences, both good and bad—and what happens next with the strength we find.” On the heels of their release and as the band prepares for their extensive tour throughout North America, the UK, and Europe beginning early next month, I caught up with Channy as she talked about the band, influences, the new album and the writing process after the accident…

E&D: Can you tell us a bit about the band and how it got started?

CL: It came out of the petri dish of the Minneapolis music scene. I was singing backups in Gayngs sending him songs I was working on, Ben and Drew had played with Ryan in building better bombs and marijuana deathsquads and Chris Bierden was a killer bass player and vocalist and his band vampire hands was on the out. We all got together at the perfect time for all of us.

E&D: How do we pronounce the band name? Does the ‘ç’ follow the same rule as it does in the French language, pronouncing it more as an s rather than a c? Is there a story behind the band name and how did the band come up with the name?

CL: Polisa is how it’s pronounced. I wanted to speak to people outside America with the name…but at the same time the name means nothing really as I never imagined it would go past the first record and the name would matter or foresee being asked about it 50 odd times over the years and never having a good answer.

E&D: Who have been the major influences on your sound and musical paths?

CL: Aretha Franklin and Sam Cooke in the gospel days as I grew up in a religious household. Tracy Chapman and Joni Mitchell. Traditional American music like blues and folk songs from the beginning of recorded music and lots of r&b in the 90s too. Whitney Houston! Lauryn Hill! Amel Larieux! Ryan’s big influences are too many to name but they are literally the exact opposite of mine in every way.

E&D: This month the band is releasing a new album When We Stay Stay Alive via Memphis Industries. I’ve read that the band has many collaborators on this album. Can you tell us who the collaborators are and how they got involved with this release?

CL: Many of the collaboration came out of the People Collective Festival in Berlin in 2016 and 2018. The buds of creative friendship lasted and bloomed back to Minneapolis in making this record.

E&D: The new album comes after your devastating accident that occurred in the winter of 2018. Firstly, I hope that you have recovered fully. I’ve read that half of the album was written before the accident and the other half afterwards. Was there ever a point in the process where the band thought the tracks wouldn’t work together or was it always the intention to include that contrast?

CL: The accident didn’t change the basics of what I do in Poliça; I’m a songwriter and I was still able to do that after the accident. And Ryan was still writing the music so much stayed the same. I’m very lucky I can still sing and hold a pencil; if not those are the sort of things that would have actually affect my ability to write songs that go together.

E&D: I’ve read about your healing process and I was intrigued by it. Can you tell us about the mental act of healing? Did this influence and allow you to write differently?

CL: I read a lot after the accident and just wrote a lot of subconscious ramblings to free anything hiding in my mind. I read Ekhart Tolle to get my spirit right and make an intention to not make the accident a part of my identity or a crutch to hide from life in. I read Mists of Avalon that inspired me in the human condition as something to persevere through with humility. And Elena Ferrante which always inspires me to make every word I write beautiful and worthy of space on this Earth. I did lots of visualizing and rewriting in my mind of what happened or has happened to me in my past with the idea that it didn’t matter any more than those things happened. That’s not for everyone but it was the right time for me.

E&D: The title of the album conjures up many emotions and the lyrics are poignant. Can you tell us what the title means to you and what message the band hopes to convey with this album?

CL: It’s up for the Listener to interpret and take in for their own selves.

E&D: You have a big tour coming up with dates in Europe and North America. Is there a particular city you are looking forward to visiting?

CL: Spain and Portugal for the first time! I am also a long time fan of Flamenco and Fado singing and so am excited to be in the company of those sounds.

E&D: What’s next for Poliça after the release and tour?

CL: Not sure: will see where the wind blows.