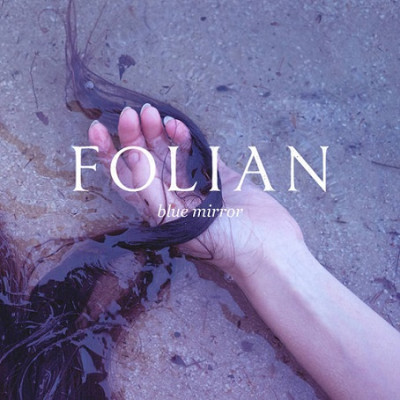 Folian is a solo recording artist based in Portland Oregon, who has been releasing music since 2017. Originally from Pennsylvania, David Stephen Fylstra specialises in spacious soundscapes that merge elements of drone, shoegaze, metal, pop and experimental noise using a mix of guitars, vocals, synths, field recordings and various other instruments in the process. Fylstra is clearly a very dedicated and prolific musician contributing to a plethora of other acts such as Ramprasad, Flood Peak and KVOID, to name but a few. As well as the recording aspect, Fylstra also releases much of his own and others’ music on his own imprint Anima Recordings.

On the self-recorded and mixed debut album, Blue Mirror, there are some weighty themes informing the music, best described as follows in the accompanying press release. The brooding album ‘explores ideas such as the duality of being and the struggle for balance and clarity during intense emotional struggle. The work stems from personal experiences with relationships, depression, fear, emotional dependence and substance use’, so as you might expect, the overall sound of the album is fairly intense.

Brief atmospheric intro ‘This is the Place’ slides into ‘Go Alone’, which starts with a lone swirling guitar line straight out of the Justin Broadrick playbook and Fylstra’s dreamy vocals ooze over the crisp but ever so slightly distorted beats. As the track swells with heavier guitars the Jesu comparisons only become stronger, then that gorgeous guitar solo winds and snakes over the throb and it’s glorious. Interlude ‘Away’ is two minutes of experimental noise and unnerving fire alarms that almost have me up out of my seat when I listen to it in work.

Waves of dragged guitar drones slip and slide over the pulsating groove of ‘I Am You’ and you find yourself treading across sonic wastelands of desolation that recall Nine Inch Nails. Fylstra’s vocals are breathy and almost inaudible adding to the fear. The beautiful delayed guitar lines of ‘Further-Give’ almost recreate And So I Watch You From Afar’s ‘Eat The City, Eat It Whole’ note for note. Fylstra’s vocals are nothing more than a sigh, but it is stunningly effective and meditative.

‘Unwanted’ is the song that initially grabbed my attention, with huge swathes of distorted droning guitar and dreamy vocals, equalling Jesu’s finest moments. Fylstra cites Neil Young as an influence and the solo guitar work that arches over ‘Unwanted’ is sublime and beautiful. When Fylstra allows his voice to soar and break free from the level marked ‘I’m not really here’ it is heavenly and heart breaking. The fleeting ‘No Wake’ is an acoustic oddity that creeps along and barely registers as it threatens to transform into something with greater volume.

‘Erasure’ drifts along with some languid clean guitar lines that are a perfect accompaniment to the steady distorted drones, all fitting together to create a hazy shimmering song. As the song builds to its conclusion it erupts into Godflesh levels of noise and terror. I think perhaps the album could have done with more moments of noise to provide a greater dynamic range. Tacked onto the end of ‘Erasure’ is the minimal and brief outro of ‘Tomorrow’, which ebbs away and closes the album with a reflective and calming moment.

For a debut album, David Fylstra has created a fine collection of songs and instrumentals that are clearly imbued with a huge emotion and life experiences that haven’t provided many moments of happiness. For the most part, it’s a bleak album that rarely rises into anything joyous but there are moments of beauty that give a little hope. I would recommend you give it a listen as it is an intelligent and well-crafted album that shows there is much more to come from Folian.