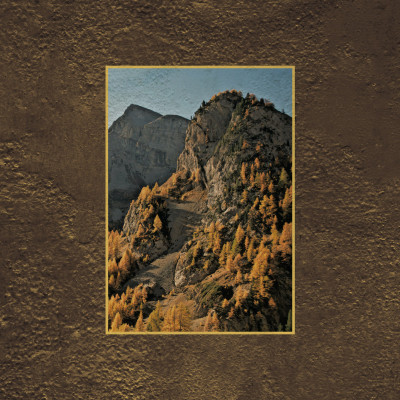 Earth II by Earth And Pillars

There are a strangely high number of black metal bands that cloak themselves in mystery and Italian studio project Earth and Pillars continues that trend. As well as “mastermind Z” the only other human that gets a nod on the press release is the addition of a real drummer to the mix of synth and guitar to give a European slant on the Cascadian atmospheric black metal sound. As with its American peers Earth and Pillars allow nature to shape the music and Earth II is a celebration of autumn and it delivers on a gust of Alpine air which ravages and refreshes through the four long form tracks.

The artwork for its third album is not as reflective of the overall bleakness involved in the tracks but there are moments which are kissed by the shimmering yellow light. Classical guitar is dusted around at the beginning of the album and also appears in gaps vacated by the vocals. Whilst acoustic guitar and synths may put off those who are hardened to black metal it really isn’t as it first appears. Whilst ‘Becoming’ opens with the acoustic being the main instrument over the synths it generally then plays a part in the sound rather than controlling it. In the autumnal theme the lighter guitar reflects the dying of nature before the harsh blasts of drums, guitar and synths sweep a desolate cold path through the debris.

The synth work is also worth mentioning as it matches the guitar in tonality and brutality but can also appear ethereal. ‘Falling’ explodes through the end of opener ‘Becoming’ and it is a beast which doesn’t let up for 11 minutes. The synth takes centre stage here casting atmosphere on top of the ferocious drumming and the bleak sound is filled with tremolo electric guitar. This is no cheesy use of a keyboard as it deploys a tone and noise which engages the guitar sound and flows on the pounding of the drums. Yet by the end of the track the keys switch to a distant echo and during the acoustic start to ‘Howling’ it swirls between uplifting and downtrodden. Completing the sound are some deep reverberating growls which are masked but relatively clear and really blusters the sound contained in the sixty minutes of music.

This is one of the more stereotypical atmospheric black metal albums that aren’t reinventing the wheel but it is giving you a brilliant car to use on the journey. If you enjoy Wolves In The Throne Room then you will certainly enjoy the length and depth reached here. As for its back catalogue, Earth II is a great development and addition and opens the options for the bands attack onto Pillars II.