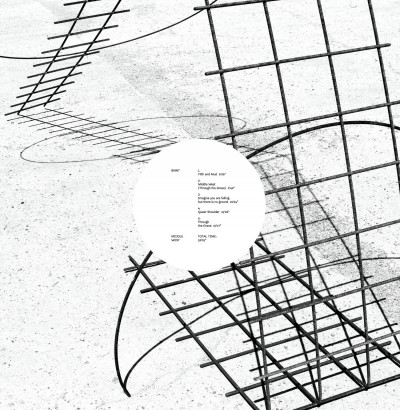 After a couple of minutes of metallic whines and ticking factory rhythms the sounds of hammering or something broken, caught in a motor, give way to a machine hum. A bitter voice whispers in your ear “I want your history to end in filth and mud.” It’s an arresting opening. Middle West is the fierce new album from Polish duo BNNT. It is not an easy listen but it is compelling. The band concede it might be “more in the vein of a radio play”. This is not to say that you need to battle your way through it once and never return. I wouldn’t be writing about it had I not felt the need to revisit it. It is charged with a righteous and uncomfortable power.

BNNT are art damaged experimentalists operating in the overlapping margins of galleries and festivals, sound installations and noise music. Live shots of the duo show them performing bare-chested in cloth hoods recalling Lightning Bolt. Daniel Szwed at the drums and Konrad Smolenski playing a modified baritone guitar that looks like a rocket. Their ‘sound-bombing’ performances featured them playing from the back of a moving truck. Skronk king Mats Gustafsson played on their previous album, you get the idea. But if Lightning Bolt are a hyper-speed rainbow ride, crash landing in a fantasy castle BNNT are an altogether more grounded proposition. Their sound world is equally rhythmic and discordant but slower, less chaotic exuberance than cold rigour.

Middle West is a palimpsest. A layering and reworking. A retelling of old and inconvenient truths. An assault on the cosy texts of recent history. At the album’s core is a poem, ‘A Letter to Europe’ by the Swedish Iranian writer Athena Farrokhzad. Cut up and modified with her consent and performed for this album by actress Jaśmina Polak. The poem is itself a repurposing of Allen Ginsberg’s ‘America’, Farrokhzad interweaving her lines with his. Written in 1956 ‘America’ finds Ginsberg venting a stream of dissatisfactions with his homeland. Farrokhzad takes aim at what we’ve come to know as Fortress Europe and the insidious framing of the world through western eyes.

‘Filth and Mud’ is the pithy prologue, a scene setting punch in the neck, a rude awakening. If such an idea even remotely made sense for this record, it’d be the single. Title track ‘Middle West [Through The Grave]’ is a sour storm of billowing feedback through which the voice rises to a livid, raw throated, shout. It draws a line in the filth and mud. It’ll get darker from here.

Following the short opening tracks the main body of the album is two much longer pieces, ‘Imagine you are falling but there is no ground’ stretches out past 20 minutes and it does so without dragging or wandering. This is a credit to the subtlety and invention of the music. On first listen your attention is held by the remarkable vocal performance and text but the way they are folded into and combined with the musical ideas are the hook that pull you back to it. Reworking the poem is a masterstroke, making the album much more than a soundtrack for a recitation. A radical but appropriate invocation of folk traditions it points to its sources but stands on its own two feet.

It’s tempting but probably unhelpful to quote liberally from the remarkable text which offers far more than the ranting polemic it first suggests. It is complex, impressionistic, human. Its rhythm and repetition reflected in the sound along with its wide emotional range. Farrokhzad’s poem is easy enough to find online, as are Ginsberg’s and the edits used here. You can download the album for free because as they say “it’s not price that creates value”. So you’ve really no excuse not to give it a try.

The final track ‘Through The Grave’ is an instrumental, an unwritten next chapter, taking its name from the lines “When will you look at yourself through the grave? When will you be worthy of your millions of guest workers?” The first half is tense and hunched beneath squalls of noise but the second offers up some hope for the future. A buoyant bass line appears, the album’s brightest most organic moment, and carries us to the edge of the forest where it gives way to bird song. As we stumble blearily into a new decade Middle West is a timely splash of cold water in the face. It offers harsh truths, refusal, stubborn hope and endless questions.