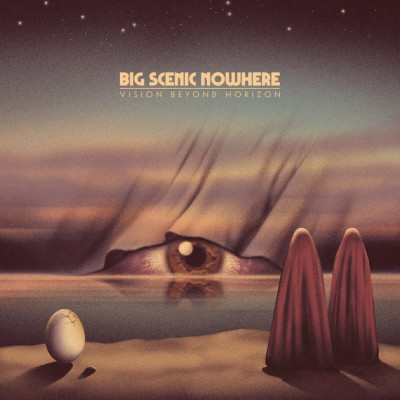 Not wanting to go to into the debate about where the line should be drawn when a band can be given the daunting term ‘super-group’, I will, therefore, refrain from such a statement and instead will report on the latest collaboration of musicians going under the banner of Big Scenic Nowhere, which is spearheaded by guitarists Gary Arce (Yawning Man) and Bon Balch (Fu Manchu).

If the thought of two guitarists, one each from ethereal atmospheric soundscapers Yawning Man and the turbo-charged stoner rock groovers Fu Manchu sub-merging already fills you with high expectation, then add in the following for good measure: Tony Reed (Mos Generator), Mario Lalli (Fatso Jetson, Yawning Man), Per Wilberg (Spiritual Beggars, ex-Opeth), Nick Oliveri (Mondo Generator, ex-Kyuss, QOTSA), Bill Stinson (Yawning Man) Lisa Alley and Ian Graham (The Well), and Alain Johannes (Them Crooked Vultures, Chris Cornell, Eleven). All of-these musicians were asked to contribute ideas to songs originally devised by Bob and Gary. For those who have been following the underground rock scene for the last couple of decades will undoubtedly be excited by such a proposition – sometimes raising the stakes is unavoidable.

I would love to impart more info on who contributed to which songs, but this information was not supplied through a digital download, or indeed the accompanying press release. One assumes these details will be fully addressed in the physical formats of the bespoke album for one to study.

The first taste of Big Scenic Nowhere was supplied by the Dying on the Mountain EP, released in September 2019. Consisting of two tracks, but boasting the epic 20-minute plus title track of sublime blissed-out, absorbing desert rock, which raised the bar of expectation for this album to a considerable elevated height. It may be because of the quality of the EP and the album title’s unlimited expansive imagery – one expects a sound to match – that the initial hearing of Vision Beyond Horizon produced a surprising underwhelming response from this reviewer. However, minus one misstep (I will come onto this in due course) with repeated plays the slow burner effect kicked in, so slowly but surely a greater appreciation and enjoyment of Vision Beyond Horizon emerges.

It will be of no surprise then, that the riff is the centre point for the songs to be constructed around, but while the nine tracks are more song-orientated, mood and vibe are still the key here. Opener ‘The Glim’ drifts in with a slow bluesy hazy swagger and a delicate crooning vocal delivery reminiscent of Masters of Reality (high praise indeed, people). It seeps into your conscious through an unrushed delivery, using a high-quality riff and gradual textual layering of synths to reveal itself as a song of well-honed craftsmanship and know how.

Echoes of The Well’s riff ‘n’ roll loom large on ‘Then I Was Gone’ and ‘Shadows From The Alter’, while ‘Mirrors’ has a dark reverberating riff Mammoth Weed Wizard Bastard gleefully spew out for our pleasure, as it adds a paranoid bad trip vibe to proceedings. And those who enjoy the significantly spaced out vibes of King Buffalo should find some joy with the absorbing excellence of ‘Hidden Wall’, ‘En Las Sombras’, and ‘Tragic Motion Lines’. The afore-mentioned curveball is the Black Flag inspired blast of ‘The Paranoid’, which may have been better served on an EP as it disrupts the classy hazy desert rock aura created elsewhere.

Big Scenic Nowhere may not be exploring unchartered musical genres for the artists involved, but they do indeed bridge elements of each of their own main bands sounds into play. It may not reach the heights of the A.A Williams recent breath-taking collaboration with Mono, but Vision Beyond Horizon should please fans of any of the musicians’ main acts. Let’s hope they continue to search beyond the horizon with further endeavours.