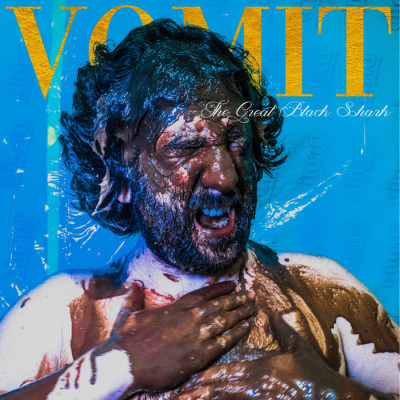 VOMIT by The Great Black Shark

Having formed in Athens, Greece in 2016 and released two EPs since then, garage punk quartet The Great Black Shark have now finally released their debut full-length album, ‘VOMIT’. The album is lots of fun and the band sound like a weirder, noisier, darker, and more perverse Protomartyr. Opener ‘Serial Killer’ is replete with surf guitars and bassist/lead vocalist E. Coli’s falsetto implorations to an unspecified addressee to “love me before I cut myself” even though “I know I’m not your girl”. The lyrics on this album are constantly surreal and dark, with a good example of this tendency appearing on second track ‘Hairy Belly’: “I found a home where I can beat the fuck out of my puppy/but now it’s all grown up and it can bite me”. Coli’s vocals sound quite John Lydon-esque on ‘Meth’ and the song also features the album’s first use of a wah-wah pedal by guitarist Beaver (yes, they’ve all got cool names).

As its title suggests would be the case, ‘Casanova’ slows matters down and gets lovey-dovey in its dream-poppy first half before the band start playing some dark, brutal post-punk in its second half and Coli screams menacingly: “I am your prince, give me your number!!/Don’t you feel empty? Let me fill you up!” The romantic allusions of the title and the opening minutes are thus turned on their head and the ‘Casanova’ of the title is seemingly revealed as a creepy, violent stalker. ‘Dreadlocks’, a song about a lost baboon, is the point in ‘VOMIT’’s first half at which Poladroid’s keyboard-playing is at its most prominent and Beaver’s guitar-playing is at its most squalling.

‘Belgian Fries’, a song about an agoraphobic schoolchild, sounds sort of like an angrier, more abrasive Thee Oh Sees, and allows Beaver to demonstrate his wah-wah mastery once again. He starts striking power chords as E. Coli starts screaming threats on ‘Cocktus’, which features the memorable lines: “You stole my girlfriend, I stole your fucking cactus/I’ll follow you anywhere you go!” The stalker character from Casanova seemingly reappears on ‘Corn Cob’ as he screams “I won’t miss any chance of fucking you tonight!” ‘Cake’ closes the album with Coli yelling “my hormones want you as you are!/Why don’t you slap my bacon?!”

This is a confident, rough-and-ready debut album that promises great things to come from The Great Black Shark. The songs have a very dark energy to them that should work well at live shows. The quartet clearly know their chops well, with Beaver showing himself to be a highly adept guitarist. The undercurrents of threat and sexual malice in the album’s lyrical content may prove off-putting to some but the band are clearly critiquing this mindset rather than endorsing it (a mindset that is, sadly, all too prevalent in today’s society). On ‘VOMIT’, The Great Black Shark use their dark, twisted imaginations to distinguish themselves from their garage punk and post-punk contemporaries admirably.